What do you do when your kid lies? 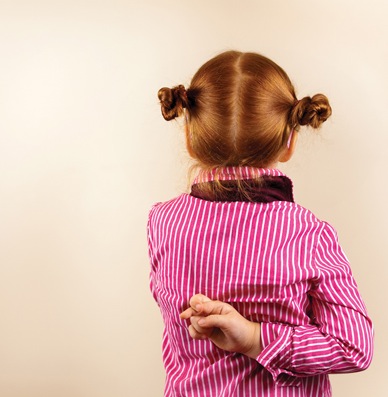 Did you brush your teeth?”
“Yes.”
“Let me see.”
“Smell my breath.”
“Your breath smells like mouthwash, and your toothbrush isn’t wet. Go brush your teeth!”
“Did you hit your brother?”
“No.”
“Why is he crying?”
“To make you think I hit him.”

Kids don’t always do the things you want them to do, and they sure don’t want you to know about the things they did that they weren’t supposed to do. So they lie.

When children in the elementary school years lie, it can be confusing and troubling for parents. We want to believe we are raising honest children who love us so much they wouldn’t think of lying to us. It’s easy to take lying personally and feel hurt and betrayed by it. We may ask ourselves, “Is he so afraid of getting in trouble that he resorts to lying?” “Am I raising a sociopath who doesn’t know the difference between right and wrong?” “Does she feel so badly about herself that she has to lie to make herself feel important?”

Most likely your child is lying because that’s what kids do.

“Lying is a typical part of development for children,” said Johna Smasal Ph.D., a licensed clinical psychologist in Tulsa. “The use of lying among children is an example of the concept called Theory Of Mind. A child possesses Theory of Mind when he or she has an understanding that others’ thoughts, feelings, beliefs and intentions may be different than their own. When a child lies, he or she must consider the mental state of the caregiver: ‘Mom’s going to be mad if she knows I broke the glass,’ and their own mental state: ‘I don’t want to get in trouble for breaking the glass.’ Younger children and children with a lesser-developed Theory of Mind capacity may say something like, ‘A ghost broke the glass,’ in an effort to avoid punishment. When children lie, it is often a way to test their developing cognitive and social skills.”

According to Smasal, we adults are not always very good at determining why a child lies. “If we jump to a conclusion about why a child lied, the response may not be appropriate,” Samsal said. She encourages parents to have a frank conversation with the child regarding honesty rather than immediately moving to punitive measures.

According to Janet Lehman’s EmpoweringParents website, lying is a faulty problem-solving skill. “I don’t believe lying in children is a moral issue,” Lehman writes. “I think it is imperative not to take it personally if your child lies. Most kids don’t lie to hurt their parents…they lie because they don’t have another way of dealing with a problem or conflict.”

“You want your child to be truthful so she can grow to be an honest person with integrity,” Smasal said, “not so she will blindly obey authority.”

With that in mind, here are Smasal’s tips for dealing with lying:

1. Don’t say such things as, “I have eyes in the back of my head” or “I know when you’re lying.” Chances are that you will not always catch your child in a lie. Focus on building trust in your relationship.

2. Don’t grill your child for “the truth” when you suspect that he or she has lied. This may lead to false confessions and loss of trust. Remaining calm and asking open-ended questions may assist the child in relating to you honestly.

3. Ask yourself, “What social convention did the child break by lying?” Did he lie for personal gain, such as to avoid punishment or to gain a reward that was not earned? If so, help him brainstorm other ways he might have dealt with his problem. Did she engage in a “white lie” in order to spare another’s feelings? If so, teach her how to respond with tact. For instance, instead of saying, “Yes, I love the sweater” when she really doesn’t, encourage her to find something she likes about the gift and respond to that: “Thank you. The sweater looks really warm!” or “I love the color of the sweater.”

4. Threats of physical punishment undermine the development of internalization of moral principles. When children are threatened with corporal punishment (“No cookies before dinner or you will get a spanking), they are less resistant to temptation. Should children fail to resist temptation, they tend to see themselves as liars, even if they are not caught. Children who DO resist temptation following threats of corporal punishment view their own compliance with the rules as a means of avoiding punishment, rather than see themselves as a person with honesty traits. Research has shown repeatedly that punitive responses to transgressions lead to “better liars.”

“Realize that most kids are not going to lie forever and ever,” consoled Lehman on her website. “There are a very small percentage of kids who lie chronically. Your child really does know right from wrong, but sometimes he overrides the truth. Our job is to teach them how to face their problems head on.”