There are some moments it feels like hate is winning. It felt that way in 2016 when forty-nine people were killed at the Pulse Nightclub in Orlando, Florida. That sick feeling of déjà vu came back to me when I heard about the shootings at an LBGTQ nightclub in Colorado Springs over the weekend. Can someone please explain to me how someone can hate people they don’t even know? How can that hatred be so intense that they feel compelled to take a semi-automatic gun and kill total strangers because of their sexual orientation or gender identification?

One of the five who were killed was Daniel Aston, twenty-eight years old and a bartender at Club Q. Daniel formerly worked at Elote (a local restaurant that is a safe place for LBGTQ) in Tulsa but had moved to Colorado two years ago, following his family there. His mother, Sabrina Aston, told The Washington Post that her son, who was transgender, had found not only a job at Club Q but a community of friends. A senseless act of hate ended Daniel’s life.

Although the shootings in Colorado Springs hasn’t officially been classified as a hate crime yet, it appears to fit the profile. It also seems to be a trend, unfortunately. Last year, hate crimes against LBGTQ people were up 51% compared to 2020. President Biden warned of rising hate and violence towards the LBGTQ community when he spoke on May 17, the International Day Against Homophobia, Transphobia, and Biphobia. The recent violence in Colorado took place on another important date for the community, the annual observance of Transgender Remembrance, which started in 1999 to honor transgender people who are killed in anti-trans violence. Not counting the Colorado Springs victims, there have been at least thirty-two transgender people killed this year.

I don’t understand the hate towards people just because they are gay, transgender, or non-binary. I cannot and will not ever comprehend how a parent can turn their back on their child. A parent is supposed to love unconditionally, with their entire heart. Yet, more parents than imaginable are willing to disconnect from their children because they are gay, trans, or non-binary. How do you abandon the child you grew inside your body, the child you tucked in every night, the child who is a piece of your heart simply because of who they love or who they are?

A few years ago, I was fortunate to interview Sara Cunningham, who founded the group Free Mom Hugs. She began that group after her son came out as gay, and she struggled to reconcile her love for her son with her Christian beliefs. As a result, she became a strong advocate for the LBGTQ community, forming Free Mom Hug groups around the country, speaking about love and acceptance, and writing a book, How We Sleep at Night: A Mother’s Memoir. But it wasn’t until I became a hugger at the Tulsa Gay Pride Parade that I began grasping the pain many feel. Sure, I got lots of half-hearted hugs, some high-fives, and some handshakes. That was fine. Then I got some full-on hugs, tears, and heartbreaking statements such as, “My mom hasn’t hugged me since I came out.” A few people seemed to melt in my arms. It felt as if they had been waiting for that parental-type hug for so long and didn’t want it to end. I was honored to be able to give those hugs, but I was sick at heart to think of their own parents refusing to be the ones giving the hugs.

Life can be difficult. It’s even more challenging for people society chooses to marginalize, such as the LBGTQ community. If you’re using religion as your basis for hatred, I am afraid you’re terribly misguided. Violence and hateful rhetoric are not acceptable. We’re here to love and help one another the best we can. Love one another, and be kind to everyone you meet. It seems so simple. Why can’t we do it? We can’t let hate win. 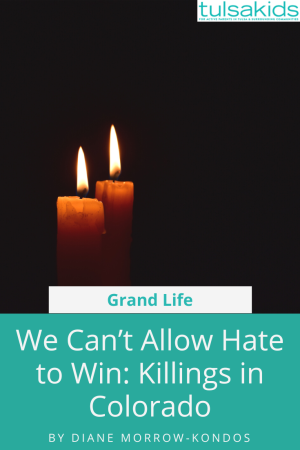