We Can Do Better for Our Children

Today I met with my Reading Partner, Ashley, for the second time. Ashley is a sweet, tiny first-grader. She was wearing a purple beaded necklace wrapped several times around her little wrist. “My mom gave me this,” she said.

She picked out Stellaluna to read, and had no problem with comprehension or new vocabulary words, but she did want to know what the word “vocabulary” meant. Ashley is curious and bright, but when I asked her who might read the book with her that I gave her to take home, she had to think for a long time. “Maybe my grandmother?” she said, but I could hear the question in her voice.

In a quick little exchange with her teacher after I dropped Ashley off at the classroom, I learned that she may have some chaotic things going on at home.

Why am I writing about Ashley again?

The Oklahoma Legislative session has begun, kicked off by Governor Fallin’s State of the State Address. While I was glad to hear that she supports providing more money to education, including providing a $3000 raise for teachers, it felt almost like too little, too late. First, the added funding is actually less than it sounds because it is after the 3 percent cut, and doesn’t even begin to make up for previous lack of funding.

But back to Ashley. What do Ashley and children like her really need? I would guess that Ashley didn’t have people reading to her every day from the time she was an infant. That, alone, makes a huge difference in school readiness. I don’t know how long Ashley has lived in Oklahoma, but one thing Oklahoma does best is early childhood education. If she had had access to an Educare Center and then took advantage of free preschool in the public schools, I doubt that I would be working with Ashley now. I hope that bright spot in early childhood education that all Oklahomans can take pride in will not end up on the legislative chopping block because of lack of funding. There is a bill being introduced to defund universal 4-year-old programs.

Children like Ashley need to be in small classes with deeply enriching environments and experienced teachers. Ashley’s teacher knows her and knows what she needs, but may not have the time to give it to her. I can only be with her for an hour a week, which is better than nothing, but not great. And then there are 200 more children who need tutoring who aren’t getting it because there aren’t enough volunteers.

So, if her teacher had a very small class, good materials and — let’s just dream big here – a few reading specialists at the school, and a great afterschool program, Ashley would probably not need me. But those things take money and a commitment from all of us to make a real difference for children, especially those who live in poverty. Instead, the Legislature comes up with ideas like vouchers, education savings accounts and high-stakes tests, all of which push Ashley and her classmates further into the ugly segregation of class and race.

I seriously doubt that Ashley’s parents could or would take advantage of a voucher or an education savings account, and which private school would accept a child who is a struggling reader in first grade? And, I know the part of town where Ashley lives. I’m pretty sure she couldn’t get to a private school, even with her voucher. So, vouchers help the people who don’t need them and they drain more funds from public schools.

I also noticed that sometimes Ashley wants to go her own way. We were supposed to talk about bats and birds today, but Ashley wanted to compare and contrast the ways that owls and bats are alike and different. As her reading partner, I could go with that, and we had a nice discussion. Is she going to get that on a standardized test? I could see Ashley sitting in front of a computer screen, ready to take a test and then deciding that maybe she doesn’t want to do it that day. And if that test is a high-stakes test, it could change the trajectory of her academic life forever. Ashley wants to be an artist or a librarian. I envision those dreams flying out the classroom window.

I’m glad to see that the future of education in Oklahoma is being discussed. We can’t buy into the myth that public schools are failing, thus we need to privatize them or turn them into standardized test factories. If it were true that public schools are failing, then why is it that Jenks schools or Edmond or any number of excellent schools are not failing? Finding small amounts of funding here and there to funnel back into our rock bottom public education and then continuing to follow policies and reforms that have already been proven not to work is not the answer. We need bigger, bolder ideas that begin with the input of education professionals. I’m sure the teachers at Ashley’s school would be a great place to start asking the right questions.

There are some excellent education bloggers in Oklahoma, who also happen to be public school administrators or teachers. If you haven’t read View from the Edge or OK Education Truths, take some time to check them out.

Another good place for parents to educate themselves about real reform in public education is to read The Network for Public Education’s state-by-state report card. 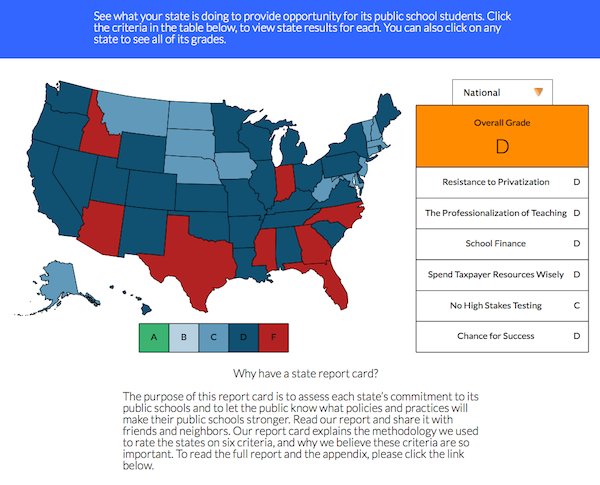 (Spoiler alert: Oklahoma received a D). Diane Ravitch, co-founder and president, and her researchers looked at states to identify which ones have weakened public education. Ravitch states in her introduction that “The Network for Public Education believes that public education is a pillar of our democratic society. We believe that public schools can serve all students well, inspire their intrinsic motivation, and prepare them to make responsible choices for themselves and for our society. Public education creates citizens. Its doors are open to all, regardless of their race, religion, gender, ethnicity, or disability status. It teaches young people to live with others who may be different from themselves.” 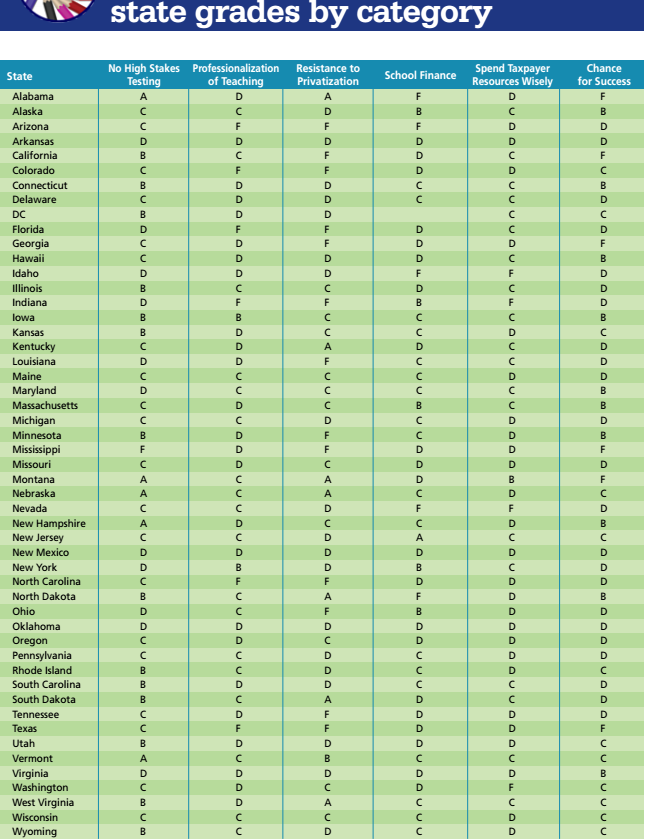 Parents, if you haven’t registered to vote, please do it now, pay attention and exercise your right.