TPCE will be held Nov. 2-4 at the Tulsa Renaissance Hotel

Tulsa Pop Kids, XPO Game Festival and OKPOP have joined forces to bring their version of Comic-Con to town. The second annual Tulsa Pop Culture Expo will kick off from Nov. 2-4 at the Renaissance Hotel and Convention Center.

This weekend-long celebration of all things geeky will help fund Tulsa Pop Kids’ mission to promote literacy through comic books and entertainment.

“If kids are in the hospital, then we’ll dress up in costumes, visit them, and bring them comic books,” Fundraising Chair Arthur Greeno said. “We’re getting more traction where more and more organizations are writing us notes saying ‘Hey, we have an after-school program and we want these kids to be reading as part of our tutoring, so can you bring us comics?’”

Looking at its long-term goals, the organization aims to eventually provide scholarships for aspiring comic artists, musicians and filmmakers.

“I mean, we could do things like every other organization,” Greeno said. “We can do the cigar-and-wine dinner and invite all of the high-level people and have them pay $1000 per person, but something like this convention directly supports the community.”

In an effort to distinguish itself from other pop culture expos, Tulsa Pop Culture Expo will tie the proceedings in with the city itself. For instance, attendees will have the opportunity to go on a tour across several locations in which the 1983 movie “The Outsiders” was shot. The film’s lead, C. Thomas Howell, will even provide commentary through a separate VIP tour.

“It’s going to be a unique experience that no one has ever had before,” Greeno said. “It’ll be a really neat way to look at some of Tulsa’s heritage and where it connects with pop culture and literacy.”

“We’re going to have a huge kids area that families can come to,” Greeno said. “We’ll have some concerts from some people who actually do music for video games, too.”

An after party will take place on November 3 at Pumpkin Town Tulsa and will include activities such as pumpkin smashing, pumpkin blasters, and corn cannons. If an attendee buys a ticket to the pumpkin patch through Tulsa Pop Kids, then the organization will save a pumpkin for them to smash at the event.

“Here’s the way we look at this: if this isn’t your thing but you like what we do, buy a ticket and give it to a friend,” the fundraising chair said. “None of us get paid – we’re volunteer-based and we’re doing this to build a revenue source so that Tulsa Pop Kids can continue to provide great literacy tools to kids.”

Greeno said he aims to attract 50,000 people to the event within five years.

“When you look around, Tulsa has such deep roots in pop culture and a lot of people don’t realize it,” he said. “We’re having a great time while hosting this and people are connecting with others in ways they’ve never done before – it’s a win all around.”

Greeno founded the organization alongside his wife, Noell, Ron and Debbie Veit, and Pat and Debbie Loveless, all of whom shared an enthusiasm for comics.

“The home environment that I grew up in was not a great environment, so when I read comics, I would look at how the super heroes behaved and go ‘Oh, this is the right way to behave,’” Greeno said. “You know, by serving others – as I grew up and matured, things change a little bit, but for my life and where it was, comics were a big deal.”

As he explored the prospect of hosting a pop culture convention, Greeno said he would often ask himself, “What would I be doing it for?”

“We started finding out from teachers that kids love comics because when they are, for instance, reading the word ‘surprise,’ maybe they don’t understand the word ‘surprise’ fully, so when they’re looking at the picture, they’re seeing from the expression on the character’s face that they’re surprised,” he said. “It’s kind of like they’re connecting the dots between what the word means and the picture they see, so we looked at that and said to the teachers ‘let us help you with that and figure out a way to make that work.’”

Greeno emphasized that he hopes to inspire others through this convention.

“I hope that by doing this and supporting literacy, we can get people thinking in different ways,” Greeno said. “Let’s not only build this thing, but also build it as big as we possibly can.” 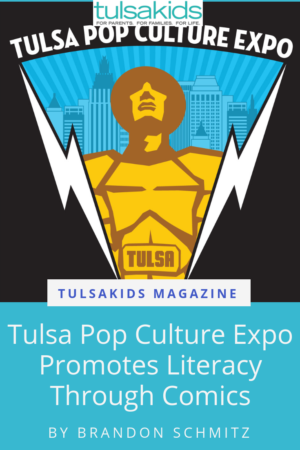