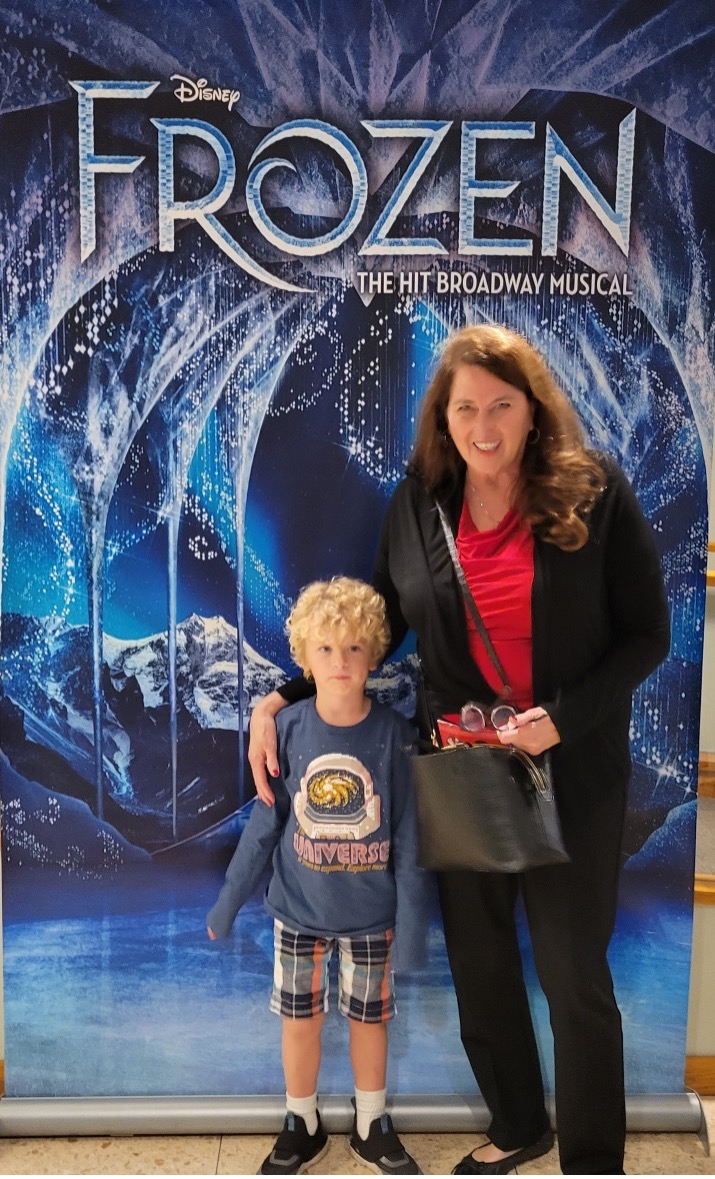 Despite the look on his face, Callister loved “Frozen”!

“Callister, would you like to go see a play with me? It’s Frozen, like the Disney movie we saw.”

“No thanks, Grandmom, that’s a girl’s show.”

“Ok, I’ll take your little sister with me instead.”

And that is how I capitalized on sibling rivalry to convince my five-year-old grandson to see the Disney Theatrical Production of Frozen at the Performing Arts Center! I hate that he thinks there is such a thing as girl’s movies and boy’s movies (I’m blaming a little girl in his class who convinced Callister that boys were not allowed to like pink), but I suspect attending Frozen went a long way to dispel that idea. He absolutely loved every minute of it, and so did I! (Don’t worry about his two-year-old little sister, it was her nap time anyway.)

We had great seats (Thank you, Celebrity Attractions!) but, speaking as someone who attends a fair share of events at the Performing Arts Center, there isn’t a bad seat in the whole place. If you end up sitting in the balcony, as I did for a show a few weeks ago, they have binoculars that are free to borrow. We got extra lucky and had an empty seat in front of us in what looked like a packed theater. We arrived about twenty minutes early, but I was prepared (figuratively patting myself on the back) with a Target toys sales brochure and a marker. I told him to go through and circle everything he liked and then everything he thought his little sister would like. That occupied him while we waited for the show to begin and again during intermission. 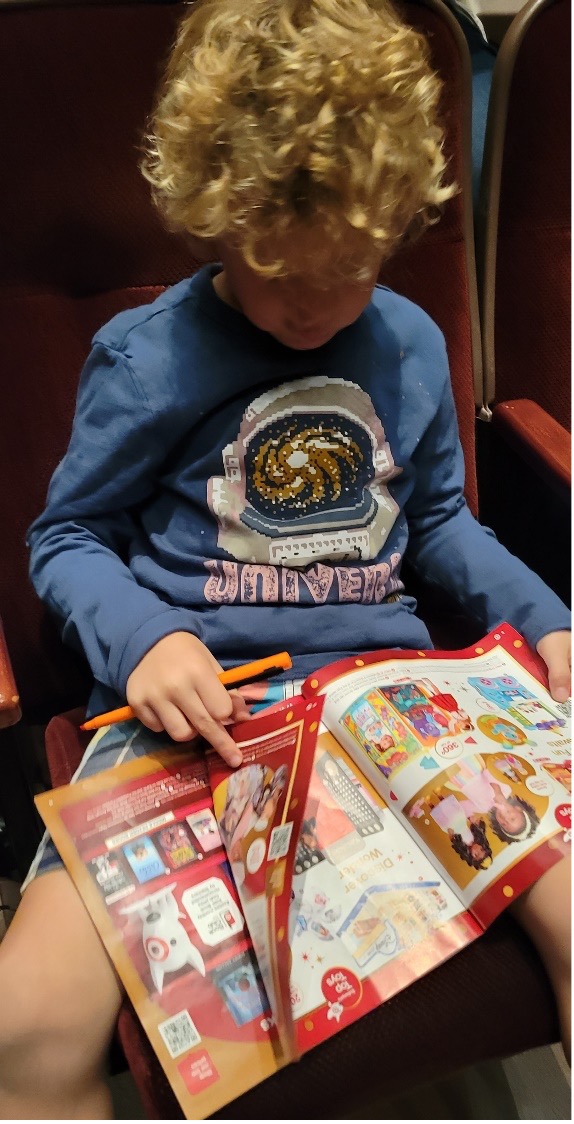 A grandmother’s purse always has distractions and treats!

I was initially surprised by how many adults were there without kids, but after I watched the performance, I realized it wasn’t a play just for kids. There was something to entertain everybody, although most of the audience were parents and children. I spotted at least twenty young girls dressed up as Elsa and one adorable boy dressed as Kristoff! I also saw a mother-daughter duo dressed as young Elsa and grownup Elsa, and I mentally awarded the mom mother of the day status!

I was a little apprehensive about how Callister would feel about sitting still so long, but from the minute the curtain went up, he was 100% involved. The costumes, the sets, the special effects, the music, and the actors were all mesmerizing. Of course, we had watched the Disney movie several times, so we knew the story, and somehow it felt familiar and brand new all at the same time. There were so many magical moments! One of them, when there was a flash and Elsa’s costume changed in an instant, left us both with wide-open eyes. We still can’t figure out how they made that happen!

There were a few scenes I found especially memorable. “Love is an Open Door,” sung by Anna (Lauren Nicole Chapman) and Hans (Will Savarese), was exceptionally well done. I also thought the sauna scene was one of the highlights. It was funny, had great dancing, and the nude-colored body suits with branches strategically placed were so realistic my grandson told his mom they were all dancing naked!

And now, I’ll address the elephant in the room. I suspect every parent (and grandparent) has heard Let it Go so many times that they cringe even thinking about listening to it again, right? I was almost dreading it. Another unfounded worry because when Elsa started singing that all too familiar song, it was as if I had never heard it before. I certainly never heard it sung like that before, and although it sounds corny, I actually got a little chill listening to her sing the familiar song. It’s not hyperbole to say I was enthralled by Caroline Bowman’s voice and performance as Elsa.

If I were to make a guess, I would place Olaf high on many kids’ lists of favorite characters, and I can’t say their opinion is wrong. The way Olaf was played was so unexpected. The actor was behind the puppet of Olaf but not hidden in any way. It worked delightfully well. After the first few minutes, it seemed the actor (Jeremy Davis) and Olaf merged into one. It was a surprising and genius idea!

From beginning to end, including intermission, the play was about two and a half hours long, but the time seemed to fly. The play is recommended for ages six and older, but many kids appeared to be in the four and five-year-old range. The fact that I heard very few kids fussing and my grandson sat still the entire time (well, there may have been a few wiggles and a Tootsie Roll Pop involved) is a testament to the quality of the production. If you have a doubt about whether you would enjoy Frozen, let it go (see what I did there?) and get yourself down to the Performing Arts Center! Frozen will be in Tulsa through the 29th of October. Click here for ticket information. 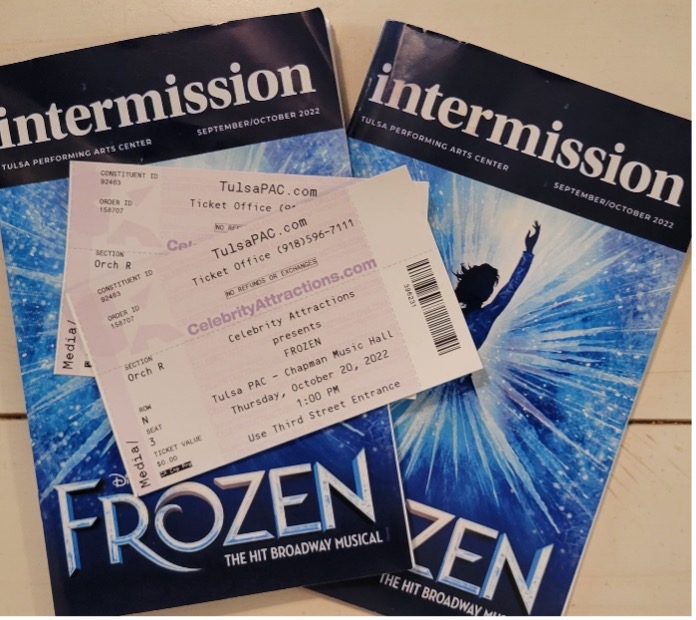 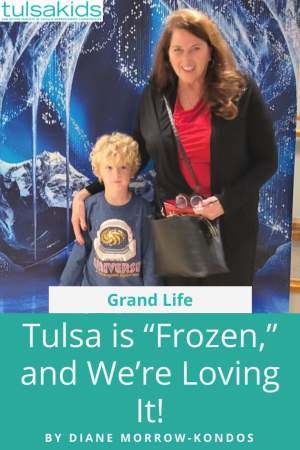