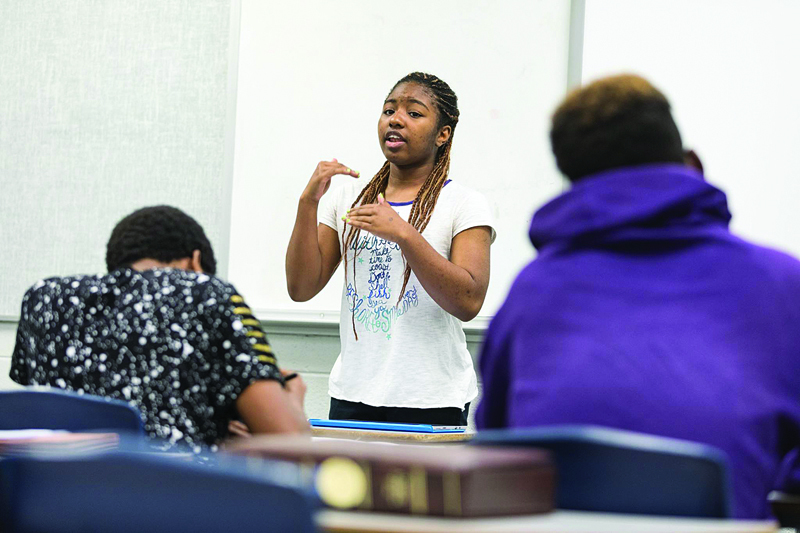 Despite being placed into a debate class at random, Central High School graduate Brian Cain found it to be a surprisingly life-altering fit.

“I’ve always been kind of inquisitive,” he said. “With debate, you were kind of forced to be – it was necessary to winning. So debate just opened my mind to all kinds of things and literally changed my life as far as how I engage with people in conversation.”

Throughout the past two years, the Tulsa Debate League has served as a nonprofit to help build debate programs in under-resourced public schools. However, its origins can be traced back to the Tulsa Community Foundation’s fund for the Central High School debate program in 2013.

“After a couple years of funding, we realized that we wanted to do more,” said founder Ross Faith. “We really wanted to build structures and systems in place that would sustain low-income schools over time.”

Faith was dubious about whether the existing funds were enough, though. According to him, travel funds are only a small part of why many programs such as these fail to launch. Teacher turnover rates have a significant impact, too.

The league expanded to a full-fledged “urban debate league” by 2015, adding five other high schools, organizing its own tournaments, and providing full-time program support to teachers and students.

Faith argues that debate education is one of the most effective tools to teach higher-level thinking. With an emphasis on developing both critical thinking and communication skills, the league aims to not only help students ace high school, but also prepare them for college.

“The additional benefit of getting kids hooked on debate is that they become more engaged in school,” Faith said. “A lot of our kids attend school more regularly than their non-debating peers.”

Although the league began as an exclusively high school program, it expanded to middle and elementary schools in 2016. As of right now, it goes down to fourth grade.

“What we’re doing is serving a population of kids who are at risk because of their school environment or conditions that make it less likely for them to graduate,” Faith said. “We want to change the game for them.”

“The additional benefit of getting kids hooked on debate is that they become more engaged in school.” — Ross Faith, founder of Tulsa Debate League

That said, the program has faced at least one major hurdle within the past year. On Oct. 25, 2016, program director and retired Jenks High School teacher Gregg Hartney died in a car crash.

“That was a huge loss to the debate community and to our organization, so we had to really adapt,” Faith said. “I ended up running the program by myself, but luckily, a lot of his former debaters chipped in and volunteered. Volunteers are a big part of what we do.”

Although Faith learned as much as he could from Hartney before the accident, it initially was tough for him to adjust to the position.

“He had just boatloads of knowledge and experience with the activity and a huge network of people to help him, so I tried to go back to that well of knowledge and experience that I gleaned from him to the keep the league moving forward,” he said. “The coaches really stepped up – the coach at Union and several of our other coaches stepped in to help develop the research and materials for the kids.”

Much of that work appears to have paid off, as Union earned second place at April’s National High School Urban Debate League championship.

“That was huge for us because it was our first year,” Faith said. “Most of the other leagues who live in cities much bigger than Tulsa didn’t even know where Tulsa was on the map and all of a sudden these kids come out of nowhere and get second place at the tournament.”

Even so, the Executive Director is more proud of what the program has done for its students academically.

“Competitive accomplishments are really awesome,” Faith said. “However, I would say that the biggest accomplishment of this past year is that all of our seniors graduated high school and are going to college.”

During his senior year, Cain won several awards, including one from the National Speech and Debate Association. He said that his debate class was one of the few places in school where critical thinking was actively encouraged.

“I definitely got a lot of life-changing experiences as far as, you know, just questioning things and not always believing what you hear without making sure it’s true,” he said. “I definitely think more using logic as opposed to emotion when it comes to issues that might be uncomfortable.”

Having just finished his first year at Tulsa Community College, Cain maintains that his experience with the Tulsa Debate League has continued to influence him.

“I think that, for anyone who goes into a debate round, setting aside all of the prizes and the cool places that you get to visit, it definitely opens up your mind to a new way of thinking that has a lasting impact,” he said. “I went into philosophy at TCC, and, looking back, what would’ve happened if I wasn’t in that debate class?”