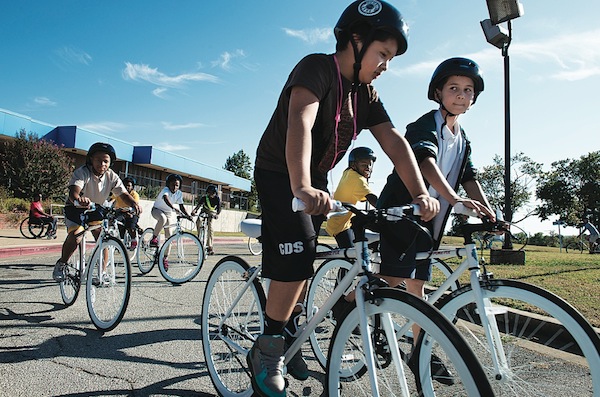 ​Emerson Elementary School sixth-grader Isaic Ford skids to a stop, the back wheel of his bike sliding out from under him. He dramatically falls to the Emerson gym floor, looks up and smiles a big, toothy grin. His bike helmet lies at a slant on his head and his glasses rest on the end of his nose. Emerson Bike Club volunteer Wendy Frankenburger extends a hand to help him up. She laughs and pats him on the back.

“These kids are great,” she says. “When I found out about Bike Club, I jumped on board to volunteer.” Frankenburger gives the bike to another Bike Club student and jogs alongside the wobbly rider as she circles the gym, weaving in and out of cones.

Isaic takes a seat on the gym floor next to fellow Bike Club friends. “Next time I’m going to see how fast I can go around those cones. I hope I don’t crash into one of the walls.” The boys laugh and begin to share bike tales.

Emerson is one of six Tulsa elementary schools to offer Bike Club to fourth through sixth graders. Other schools include Cooper, Jackson, Lee, Remington and Robertson. “We are hoping to add three additional schools next year for a total of nine Bike Clubs in 2016-2017,” said Jason Whorton, one of the originators of Bike Club and co-founder of Humble Sons Bike Company.

Whorton, along with his brother-in-law Tommy Chavez founded Humble Sons Bike Company in 2008 with a commitment to provide bicycles and helmets to children who might never experience the pleasure of coasting on two wheels. The first year, Humble Sons donated 22 bikes to children in the Tulsa community. This year alone, with the help of over 250 volunteers, Humble Sons has assembled and given away 1,000 bicycles benefiting 20 organizations including several foster-care programs, youth service organizations and elementary schools.

“I would say that since 2008 we have donated almost 5000 bikes to kids. Every year we are able to increase our donation capabilities thanks to volunteers and increased corporate and business interest,” said Whorton, who believes that bikes enable children to exercise as well as provide needed transportation. Getting bikes in the hands of children will encourage the longevity of Tulsa’s current bike boom.

“Now, in Tulsa, there is a good chance when you are driving your car, you are sharing the road with a cyclist,” said Mike Wozniak, owner of Soundpony Bar in the Tulsa Arts District. Soundpony is a gathering spot for area cycling enthusiasts and an active supporter of Tulsa cycling events.

A Colorado native, Wozniak is at the forefront of making Tulsa a safe and friendly cycling community. He is a member of The Tulsa Bicycle/Pedestrian Advisory Committee (BPAC), which advises the Mayor, City Council, and City Departments on projects, policies and programs that improve and/or affect bicycling and pedestrian conditions in Tulsa. From his involvement with BPAC, Wozniak met Whorton and Gary Percefull, a Tulsa Board of Education member.

According to Percefull, Tulsa is being recognized nationally as the “Midwest Mecca” for cycling. “The American League of Bicyclists rates Tulsa as a Bicycle Friendly Community because of great cycling clubs and events like the Tulsa Tough which has developed a national reputation. Last year, the University of Tulsa was recognized as a Bicycle Friendly University because of their support for cycling through the TU Rider Network (TURN) and the university’s Yellow Bike share program,” Percefull said. “And this year the Tulsa Wheelmen cycling team was recognized as one of the best cycling clubs in the nation. There is a lot of momentum in Tulsa for cycling and more cycling infrastructure. Discussion includes cycling lanes and sidewalks that allow safe passage for bicyclists and pedestrians.” 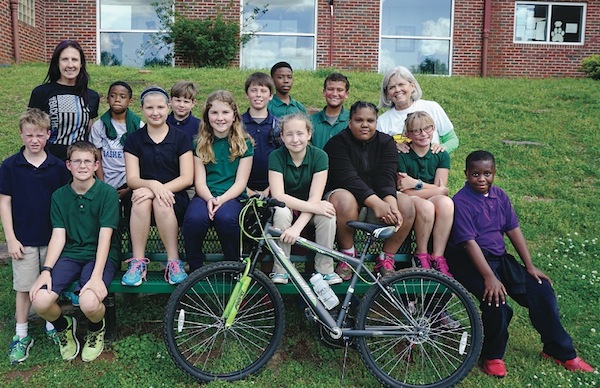 Just over a mile north of Soundpony is a large swath of land that was, before the Tulsa Race Massacre, a thriving community of houses and businesses. Emerson Elementary sits at the top of a hill just north of the vacant land on North Boston Avenue. Wozniak has a vision, and still hopes it will someday come to fruition, for that land to become a bike park. “That land just sits there, unused,” he said. “It would make a great bike park for kids and adults.” By noticing that land, Wozniak discovered Emerson.

Wozniak has become a regular at Emerson. In March he served as “Principal for a Day” at the school. One could say Wozniak has adopted Emerson and Emerson has adopted Wozniak.

“Wozniak’s enthusiasm for cycling is unmatched. He is constantly coming up with ideas on how to make Tulsa a cycling friendly city. Once Mike found out about Humble Sons, he and Gary came up with the school Bike Club idea,” Whorton said. And Wozniak envisioned Emerson to be the Bike Club beta test.

“Mike and I approached Emerson Principal Tammy States and school Social Worker Heidi Mayer about a Bike Club,” Percefull said. “Both were easily convinced to let us give it a try. Mike supplied the enthusiasm and bike knowledge and Jason supplied the bikes and curriculum.”

“I just wanted to enable kids to experience the joy of riding a bike,” Wozniak explained.  “We had to work out a lot of logistics, but the school stepped up and helped make it work.”

Mayer said the primary objective of Bike Club is to teach students about taking care of a bike and bike safety. “Our main goal is to give these kids another reason to come to school, be good students and be a part of a club with their classmates. The Bike Club offers students incentives if they have good attendance at both school and Bike Club. Myself, the teachers and administrators at Emerson select a variety of kids for Bike Club,” Mayer explained. “Members must pay attention in class and respect their teachers and peers. If the Bike Club members succeed at this, they receive a bike and a helmet to take home at the end of the school year.”

Whorton refers to the Bike Club incentives students must fulfill as the “ABC’s.”  “Attendance, behavior and coursework. Incentives work. Those kids want to take a bike home at the end of the school year,” he laughed.

“The mission of Bike Club is to build great Tulsa citizens through cycling,” Percefull said.

Volunteers from area cycling teams, businesses and churches make a school’s Bike Club roll. Many of the Emerson bike volunteers have become mentors at the school. “They come for lunch with a student and read to them. It has been great to watch them get involved and the kids love to see them,” Mayer said.

On a rainy Tuesday afternoon, the 20 Emerson Bike Club members meet in the lunchroom to discuss their afternoon agenda. Because of the steady rain outside, Bike Club will ride in the school’s gym. They use smaller BMX bikes they assembled over the winter as part of a USA BMX STEM (Science, Technology and Math) project.

When the sun is shining, Emerson Bike Club can be seen pedaling through downtown Tulsa. “The kids learn how to bike in town. We stress the rules of the road. We have biked the streets of downtown and visited the art museums downtown as well as bakeries. We have also biked on the trails. I want these kids to realize a bike is a way to get around. It is a means of transportation,” Wozniak said.

“The mission of Bike Club is to build great Tulsa citizens through cycling,” Percefull said. “The youngsters in Bike Club are not only exposed to bicycle safety and encouragement to develop a healthy lifestyle, we have provided STEM curricula built around cycling. But the icing on the cake is the relationships, the mentoring and positive adult role models these students are exposed to. We hear from volunteers and educators that the kids are learning respect, discipline and teamwork, as well.”

Last year the Emerson Bike Club was a “huge success,” Mayer said. “We had 20 students complete the program and earn a bike. Many of our families struggle with transportation and many do not even have bus passes. Perhaps a bike can get a student to school and in the future they can use it to get to work or somewhere around town.”

“There are so many segments of biking we take for granted when it comes to teaching kids to bike. Most children do not know how important it is to wear a helmet. At Bike Club, we tell them to never get on a bike without a helmet. We teach them how to shift gears. We also teach hand signals and what to do at traffic lights,” Hilsabeck said.

Lee fourth-grader Jayden Owens said everyone in his family has a bike. “We live over by OSU Tulsa and we ride on the trail. If I get my homework done in the afternoon, my mom and I will ride our bikes. We sometimes ride 10 to 15 miles.”

Laurel Ledbetter with the Tulsa Police Department is a Lee Bike Club volunteer. Her children, Grace and Kellen, are in the club. “I have been able to arrange for the students at all the Bike Clubs to meet the Tulsa Police Department Bike Patrol. It is important for the kids to see that police can be positive role models. The Bike Patrol talks to club members about being safe on a bike.”

To learn more about Bike Club or to volunteer for Bike Club visit www.humblesons.org.