Treats Don’t Have to Be Sweet

Here are some fun little treats for your little monsters that will fill them up before they venture out to fill up on candy. These are easy. Really. I know you don’t have time to spend hours making party food or Halloween-themed dinner sandwiches. I made the Jack-o-Lantern hot sandwiches pictured here in minutes. All it takes is a cookie cutter and three ingredients (well, four, if you count the egg wash that you put on top).

I got a set of three Halloween cookie cutters on sale at Williams-Sonoma for a little over $5. I now have a jack-o-lantern, a bat and a cool skeleton. I like these cookie cutters because they are made so you can push out the dough so it doesn’t get stuck.

Here’s the lowdown on the non-sweet jack-o-lantern treats. 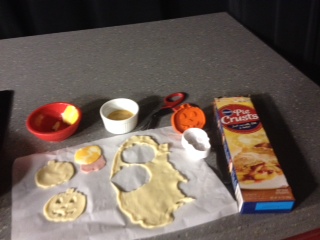 Heat oven to 400 degrees (or whatever the pie crust package says). Spread out the pie crust dough and use cookie cutter to cut as many shapes as you can on a sheet. My cookie cutter made impressions where the eyes, nose and mouth are on the jack-o-lantern, so I cut out half the pumpkins with no impressions for the back of the jack-o-lantern and half with impressions for the faces. You are going to sandwich these together with the cheese and meat in the middle. Put all the “backs” on a baking sheet covered with parchment paper.

This could be the hard part. Cut out eyes, nose and mouth on the half of the dough you’re using for the face. This will be the top of your sandwich. If you don’t want to go to this trouble, you could use chopped veggies and/or olives to make the face. The cut-out version is cool, though.

Cut out circles with the cheese and meat. The easiest way to do this is to use kitchen scissors, but no need to be precise. They just need to be smaller than the pumpkins. 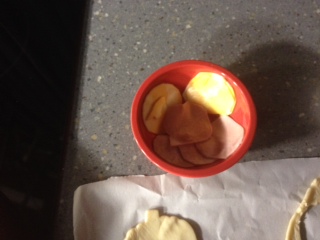 Put sandwiches in the oven and cook for about 10 minutes or until starting to brown. 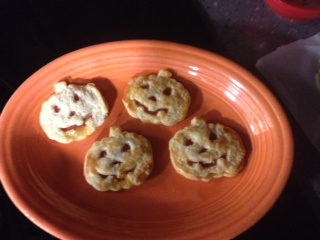