An interview with Juan Miret 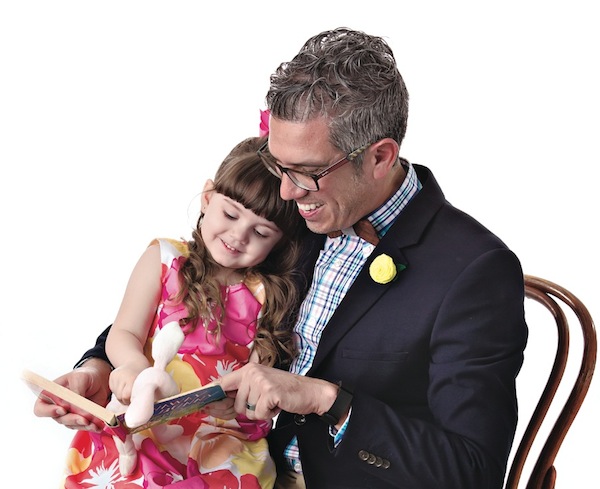 ​Juan Miret envisions a “new Tulsa” — one with a Latino twist. “Being Latino is a way of life for me,” said Miret in his singsong, Venezuelan accent. But Miret’s enthusiasm for his adopted home could make even the most jaded Tulsan see the city in a new and colorful light. It’s an enthusiasm this Tulsa dad shares with his young family, his “very American” wife Melissa and 3-year-old daughter Paloma, who is “awesome” (Miret’s go-to word).

Never without a camera, the noted photojournalist takes pictures of children, families, teachers, coworkers and neighborhood business people that he encounters every day. And Miret always sports a bow tie, a fashion statement that “helps people remember me.”

“I love being a dad in Tulsa,” Miret said, “because walking through our awesome city reminds me that today’s immigrants come for all corners of the world, bringing a range of ethnicity and beliefs, loving their families and defending their new home loyally.”

A self-proclaimed “Caribbean guy,” Miret left Venezuela for the United States in 2001. “I had completed college, and there was major political and social unrest in the country. I did not see a future for myself there,” Miret said. “It was not easy. I was 25 years old, and I left everything. My family, my friends, the place I was born, my neighborhood.”

Miret said he became a “Midwest guy” because of a few close friends already living in Tulsa. “I admit Tulsa was a change from Valencia. But one day, while driving through downtown, I could not believe what I saw. A statue of Simon Bolivar. He is like the George Washington of Venezuela.”

In 1991 Venezuelan President Carlos Andres Perez visited Tulsa to present a bust of Simon Bolivar, the liberator of Venezuela, to the city and receive an honorary degree from the University of Tulsa. Venezuela’s ties with the city began in 1990 when Tulsa-based Citgo Petroleum Corporation became a wholly owned subsidiary of Petroleos de Venezuela S.A., the state-owned oil company of Venezuela.

The bust was originally placed in the Plaza de Americas at Seventh Street and Denver Avenue. In 2006 it was moved to the Gilcrease Museum gardens.

“Whenever I take Paloma to visit the Gilcrease, we start in the garden and see the statue of Simon Bolivar. I tell her about him. I want her to understand and learn where I came from. Someday I will take her to Venezuela,” he said.

It wasn’t just the statue that reminded him of home. Wherever he looked, Miret began to see “pieces” of Venezuela in Tulsa. “At a local supermarket I would see Venezuelan food products. I found bakeries with Venezuelan churros, my favorite. And I started meeting other Venezuelans. Then I discovered the Day of the Dead Arts Festival. I knew that this was my new home.”

Miret, who registered to vote the same day of his naturalization ceremony in 2009, lives in a downtown high-rise. He, Melissa and Paloma live on the fourth floor, while his mother has recently acquired a place on the second floor of the building.

“My mother now comes and stays for several months. It is wonderful that she spends time with us and especially Paloma,” he said. “She speaks to her in Spanish and has her in the kitchen when she is cooking.”

Miret hopes that Paloma can attend one of Tulsa Public School’s duel language immersion programs in elementary school. “I want her to be able to speak Spanish and feel comfortable with the language. It requires discipline to keep the language and culture alive in my home. We are a bi-cultural couple. It is my job to keep pieces of Venezuela in Paloma’s life,” he said. “I ask her questions in Spanish and if she answers in English, I ask her to answer in Spanish. And many times Paloma will translate something into Spanish for her mother.”

A writer, Miret has worked as a correspondent for the El Nacional de Oklahoma weekly Spanish newspaper. He served as the Chairman of the Greater Tulsa Hispanic Affairs Committee from 2014 to 2016 and he has exhibited his photography at Living Arts of Tulsa. Currently, he is a Communications Specialist with Growing Together Inc., a community partnership established in 2011 to bring organizations and Tulsa residents together for collective impact in the Kendall-Whittier and Eugene Field neighborhoods. The organization’s vision is to end the cycle of poverty for kids in these neighborhoods through education.

Growing Together and the schools supported by the organization such as Kendall-Whittier, Sequoyah and Eugene Fields elementary schools, are Miret’s playground. He can be seen mentoring with Reading Partners, assisting parents with school-related issues or helping teachers with school activities.

“Growing Together is a collaborative effort from schools, community leaders, teachers, business leaders and residents in the neighborhoods,” Miret said. “We all have the same goal. We believe if we transform our neighborhoods creating housing, parks and business, the people in the neighborhoods have a safe place to live. Children can go to school and learn and do not have to worry about crime. Families can shop in the neighborhood.”

Latino families, Miret said, face many obstacles in Tulsa. “Many parents do not speak English; therefore, their children must translate for them. The education system is different in America so they must learn to steer through the system. And while the kids are out in the neighborhoods and the schools, many times the parents do not want to be exposed because they are afraid of the police and immigration policies.”

The 2007 Comprehensive Immigration Reform Act “damaged relationships” between Latinos, the police and immigration officials, Miret said. “People felt scared. Children did not know if their parents would be there when they arrived home from school. Parents worried they would have to leave behind children and friends and return to their home country. My involvement on the Hispanic Affairs committee for the Hispanic Chamber was to discover ways to reach out to the younger Latino population. There is a future voting machine in Tulsa of young Latino’s. There are some 70,000 who will turn 18 over the next several years. We must encourage them to vote and push for Latino representation in the city and in our schools.”

The Latino community today, Miret said, is lacking mentors for their youth. “Latinos are very caring and helpful, but they use that energy within their own families and their churches. We need young Latino men and women to reach out and serve the communities. They must become mentors and role models to the Latino children who need to see that they can achieve and can go to school and college.”

Miret is optimistic that positive changes are happening in Tulsa. “I know Paloma and all the other Latino children will experience our culture and have more and more opportunities right here in Oklahoma. Diversity to the max! That’s what I like about being a dad in Tulsa,” he said. “I can show my little princess that the world is full of colors, flavors and traditions!”