Too Dangerous, Too Safe?

Finding the balance for kids. 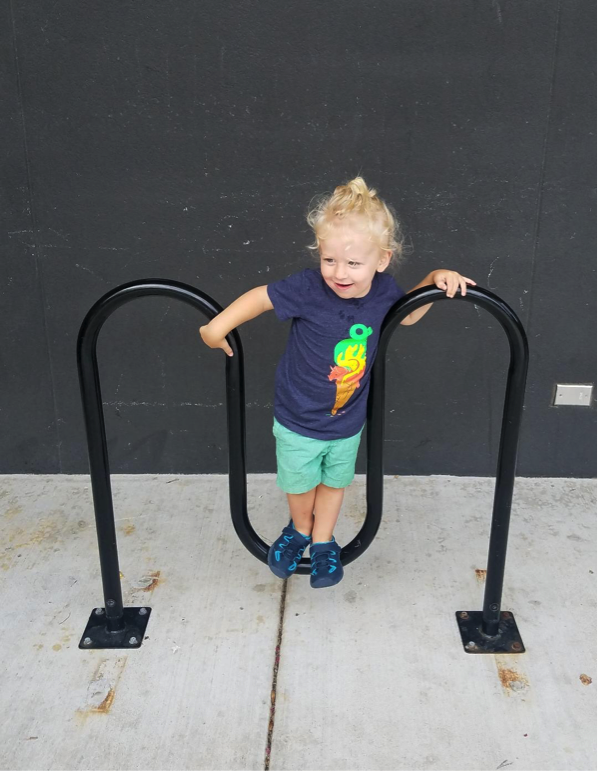 That is not safe!” I heard the mother repeatedly and strongly give the warning to her two-year-old son. After the first few times I overheard her, I began questioning my own judgment with my grandson of about the same age. The activities she was scolding her son for, structures she wasn’t allowing him on, were things I was absolutely fine with-or had been up until then. Am I not a good grandparent, am I not being protective enough? I’ve always thought that, if anything, I border on being too protective, but this woman’s adamant danger warnings had me questioning myself. Am I allowing Callister to be too physically adventurous? I love this kid more than life itself; am I putting him at risk by giving him room to explore his capabilities? What is too dangerous, and is there such a thing as too safe?

It’s been almost thirty years since my youngest was a two-year-old, so maybe I’m rusty. My children were also more physically passive, not risk-takers by nature. My husband and I are athletic-minded, and we both love adventures and challenges. My grandson is obviously going to be physical. He likes to climb, jump, swim, and run, and his motto seems to be higher, faster and further! He has a lot of energy, and even when he does take a tumble, he’s resilient, picking himself up and moving on with rarely a tear shed. What if we were to restrict him to only activities that were totally fail-proof, things we know carried no risk? He might never get hurt, but it might also limit his abilities. 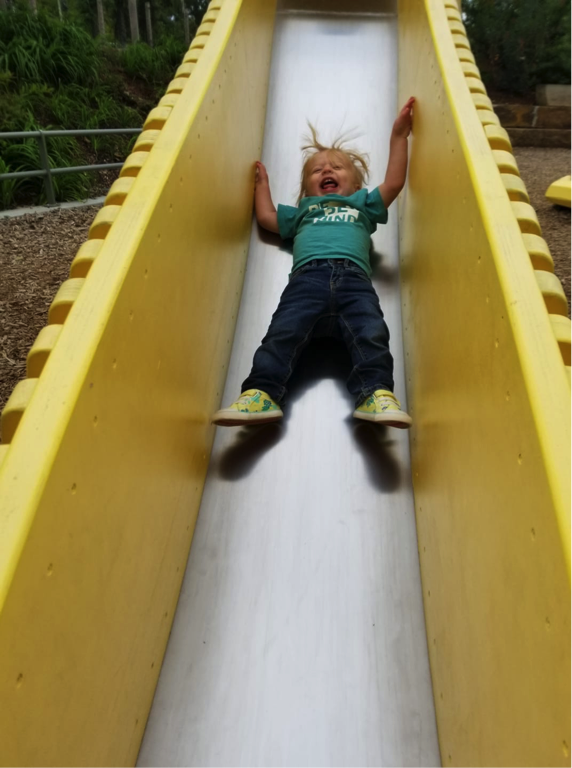 The banana slide at Gathering Place is one of his favorites! He likes that edge of scary!

Child development experts say allowing a child to engage in reasonable-risk activities helps them learn to think independently and make decisions, improves their gross motor skill and spatial awareness, and improves their overall confidence. Adventurous play improves their skills in learning to deal with risky situations and reduces the likelihood of developing life limiting fears. Play is children’s “work” and is critical to their development. For instance, did you know that climbing up the slide actually serves an important purpose? According to Sprouts Child Development, “Climbing up the slide helps build core strength, large muscle skills, kinesthetic awareness, risk assessment skills, social skills and takes lots of perseverance!” And you thought they were just being rule breakers!

Of course, we limit things that are obviously dangerous. We’ve safety-proofed our house and follow all the guidelines for toddler safety. We are strict with the non-negotiables such as using the car seat and insisting on hands being held in parking lots. I’m especially strict when it comes to water safety. My grandson turned two mid-June, and he is bored with the baby slide at our neighborhood pool and wants to go down the big kids’ slide and off the diving board. Although I admire his courage, I insist he must wear his puddle jumper and have an adult waiting in the water. His swim skills are improving rapidly, but the rule for adult supervision at the pool will remain until he’s the adult doing the supervising. Because drowning is a top cause of death in children, safety has to be the top priority around water.

Children learn through play and exploration, and Gathering Place is a perfect arena to allow kids to stretch their wings a bit, all the while staying safe. National Geographic just named Gathering Place as one of the “twelve mind bending playgrounds around the world,” and we agree! The designers of the Gathering Place seem to have found that perfect balance of reasonably safe yet also challenging and sensory stimulating. We are major fans and frequent visitors! 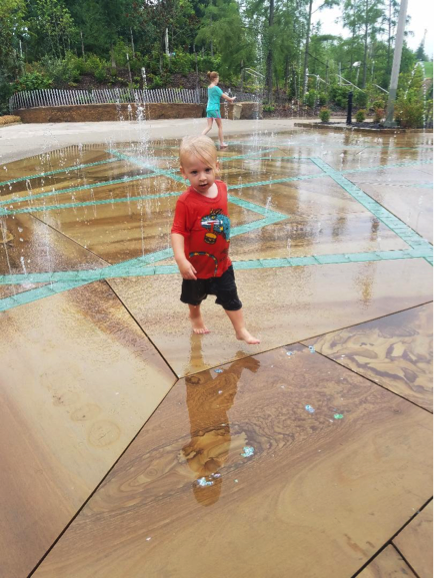 I’m not the expert on any of this; I have more questions than I have answers. I swing wildly between wanting to wrap my grandson in bubble wrap to protect him and in the next breath, encouraging his innate adventurous nature. Somewhere in the middle for most issues is usually the correct approach; knowledge, moderation, and common sense are the best tools for decision-making.

I’ll probably still be questioning the boundaries years from now, but I’m going to trust my instincts rather than another person’s voice (unless that voice belongs to my grandson’s parents). None of us are blank slates; another person may be coming from a viewpoint of someone who has experienced a traumatic episode. Their child could also have health issues that carry stricter limits. I want Callister to feel like he can explore his environment and his physical abilities, which means he probably will have a few scraped knees and occasional bruises. The joy of climbing trees, riding bikes, running, and jumping is a good payoff. And I’ll be close by with band-aids, a cold compress and grandmother kisses to soothe the boo-boos.

“The dangers of life are infinite, and among them is safety.”
— Johann Wolfgang von Goethe 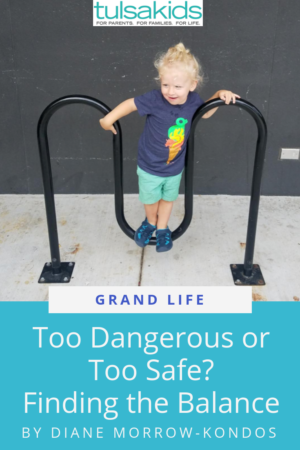