The link between large tonsils and sleep issues

Do you notice him grinding his teeth?” our dentist asked at my son’s regular, 3-year-old cleaning appointment. He was closely inspecting my son’s tiny teeth one at a time, but paused to ask his question with a serious face. “Not really,” I said. “But he does wake up a few times a night, maybe he’s grinding then?” I questioned back. “He’s probably waking up because he can’t breathe,” he replied bluntly. “His tonsils are huge.” That conversation was the first time I had ever heard my 3-year-old had overly large tonsils. Our pediatrician had never mentioned it, and he really didn’t get sick that often.

After that teeth cleaning, our dentist recommended that we bring it up during our next doctor visit. So casually at our well-child checkup a month or so later, I mentioned that our dentist had commented on the size of my son’s tonsils. Our doctor looked closely and said that they did appear large, but that often kids grow into them and we shouldn’t worry especially since he was a pretty healthy kid. Relieved, I thanked him and mentioned that the waking up at night must be a stage.

“Wait, you didn’t mention he was having trouble sleeping,” the doctor said.

Until these visits, I had only thought tonsillectomies were for sick kids. Kids who got strep throat multiple times per year or had constant sore throats would of course have their tonsils taken out. But after several tests later and a visit to the ears, nose and throat doctor (ENT), I learned that tonsillectomies can also be used for obstruction cases. In some kids, like my son, tonsils (and adenoids) can grow large enough to block the airway, making it difficult to breathe. This can be especially noticeable when they’re lying down, when gravity brings the tonsils down onto the airway. According to our ENT, this leads to a condition called obstructive sleep apnea (OSA), which can be serious and lead to health and behavioral problems in children.

Snoring during sleep isn’t enough to diagnose OSA. “Apnea” means that the person actually stops breathing — according to our ENT, parents should listen for not just snoring but pauses in breathing.

For our son, it sounded like a choking noise followed by silence. In our case, it was pretty clear that our son needed to have his tonsils removed. For others that aren’t so obvious, our ENT said he often orders a sleep study, called a polysomnogram (PSG). During this study, the child is monitored during sleep to get a better sense of exactly what is happening.

These studies can be very helpful, but even our doctor admitted that they aren’t perfect. Not only are they a measure of just one night, which may or may not be typical, but they don’t always predict whether or not a child will have the health and behavioral problems we worry about, or whether they will get better after surgery. Also, PSGs are expensive and not always widely available.

While tonsillectomies are pretty routine, they are certainly not without risks. And when your tonsils are working properly they play an important part of the overall lymphatic system and help to fight infection by filtering bacteria and viruses from the air and food. However, if your little one is having sleep problems and also has large tonsils, it doesn’t hurt to talk with your doctor.

While getting our son’s tonsils out was certainly not at the top of our list, the risks to his health made a strong argument. We scheduled an appointment and the procedure was quick and relatively easy. Our little guy was feeling about 70 percent later that same day and after about a week, he was back to normal…and sleeping straight through the night. 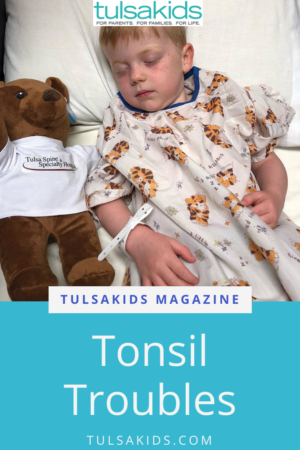