I measure my life, not in coffee spoons, but in moving kids in and out of dorm rooms. This will be the last year of college for my middle 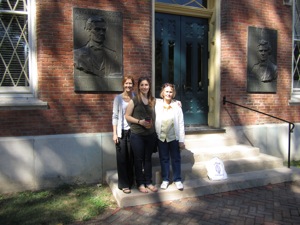 child, Anna, and, needless to say, the emotion meter was clicking away. I think the packing and unpacking is a good thing. It helps keep everyone focused and busy so that you aren’t reduced to tears at any given moment.  This year, my mom went with us, so it was a three-generation girls’ road trip! It also happens to be my mom’s 83rd birthday on Thurs., so we kind of made it into a celebration, which it was.

Galesburg, IL is a small town on the Amtrak line about three hours southwest of Chicago. It’s surrounded by cornfields. Literally. My mom wanted to look at the view out of our Super 8 motel window and she opened the curtains to an endless sea of corn. Really. It started about three feet from the window and went on as far as the eye can see. I know now why horror movies involve cornfields. You could go out there and never come back.

Knox College is a small liberal arts college with some very cool history. It was founded by Congregationalist and Presbyterian abolitionists and happens to be the site of the final Lincoln/Douglas debate. The photo with this blog is of me, Anna and my mom in front of the spot on campus where the debate was held. You can still sit in a chair that Lincoln sat in if you go in that building. Other claims to fame are that both Barack Obama and Stephen Colbert have delivered graduation addresses at Knox.

Being Anna’s senior year, I was thinking “This is the last time we’ll be dropping her off….The last time I’ll be going to Landmark Cafe…The last time blah, blah, blah.”  Galesburg has three great coffee shops, as any good college town should, which we always take advantage of. The one across from the campus and the one in the quaint little downtown area have a distinctive “Gilmore Girls” feel.

We unloaded all of Anna’s stuff into her new residence — a large house owned by the college. The whole thing had been redone and was clean and freshly painted. Two roommates had already arrived (she’ll have a total of 6) and Claudia (not her real name, but her American name), a foreign student friend from China, was “squatting” there until her dorm opened. I was glad to be able to see it in its pristine condition and to support my mom’s fantasy that the seven of them would keep it clean and tidy all semester. By the second day, there was a trail of coffee spilled across the indoor/outdoor carpeting leading into Anna and Maisie’s room. Evidently, Maisie had poured her coffee into Claire’s corncob cup, which started to deteriorate when it was filled with hot coffee. (This blog is beginning to have a coffee theme that I had not intended.)

Anna gave my mom a tour of campus. I waited outside the student store while they went in so my mom could get a tee-shirt. (I guess I should say, I was drinking coffee and holding Anna’s, so I couldn’t go in.) I could see my mom and Anna laughing and talking with each other through the big glass doors, and teared up a little at how my often ironic daughter could so un-ironically and sweetly enjoy spending this time with her 83-year-old grandmother.

After the campus tour, we visited Bishop Hill, which was a Swedish settlement that began as a utopian society at the turn of the century. It’s now a little Swedish settlement in the middle of cornfields. It attracts tourists and people like my mom who love all things Swedish. After that, (and after having Swedish meatballs and coffee and pie at a Bishop Hill Bakery), we  made a pilgrimage to the birthplace and burial location of the great American poet Carl Sandburg in Galesburg. Then, after our annual trip to Target, we left Anna with her friends to start her final year at Knox.

This morning, as I sat on my patio drinking coffee, I enjoyed the coolness. The sun was coming up and a V of noisy geese flew over the house, the sun catching them underneath, so they looked as if they were glowing. Normally, Anna would be out there with me, having coffee, getting ready for the day, as was our habit all summer. I was struck with melancholy and tears welled up in my eyes. But it wasn’t really sadness. I felt lucky.