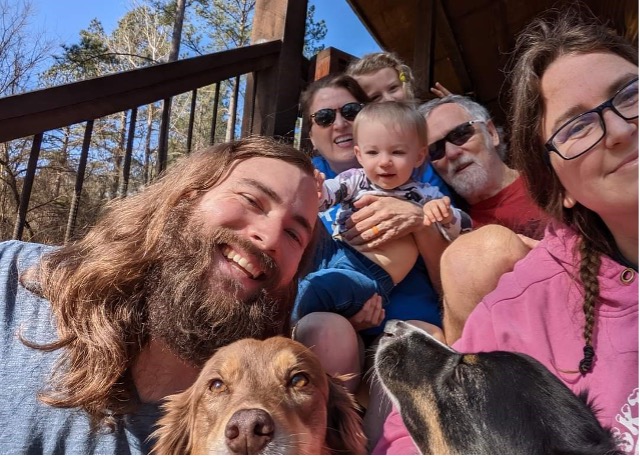 Happy chaos. That’s my synopsis of our three-day, three-generation trip to Broken Bow last week. My daughter, her husband, their two kids, two Australian Shepherd dogs, my husband, and I decided to take advantage of Spring Break and head south to Broken Bow and Beavers Bend State Park.

Six people and two dogs were not going to fit in one car, so we took two. My husband and I drew the long (or was it the short??) straw and got the kids in our car instead of the dogs. According to Google Maps, it’s a three-hour, seventeen-minute drive from my house to Broken Bow. It’s obvious that whoever decides the estimated time it takes to reach a destination does not factor in a post-menopausal woman with T.B syndrome (tiny bladder), a toddler who needs a diaper change, or a pre-schooler who needs help with the tablet. (We’ll discuss devices later.) Including a stop at McDonald’s to feed our vegetarian grandchildren hamburger Happy Meals, it took us about five hours to get to our cabin.

We began the drive full of enthusiasm, energy, and good intentions. We sang many rounds of Old McDonald, the ABC song at least three times, and of course, “We Don’t Talk about Bruno” had to be included. We listened to a CD from our favorite local group, Hot Toast Music Company, which got us to Okmulgee, and then we realized we might be in trouble.

After our lunch stop at the McDonalds on the Turnpike, we broke out the tablet. Our son-in-law had downloaded appropriate shows for our four-year-old grandson. Sweet seventeen-month-old Sylvia was considerate enough to take a nap. If only that peace had lasted. About 45 minutes away from our destination, my usually easy-going, happy granddaughter began sobbing, and not in a quiet way. This girl was exercising her lungs and making her displeasure clear, but who could blame Sweet Sylvia at this point in the drive? When she got my phone with cute cat videos pulled up, the sobs quickly turned to delighted meows. So much for judging parents who use devices to entertain their children. Sometimes the price of peace is screen time.

This isn’t a last-minute trip idea because cabins book quickly. My daughter booked our cabin last November. I have stayed at Beavers Bend State Park cabins in the past, and those cabins are fine, but they also book up in advance. However, the last two trips we’ve taken to Broken Bow, my daughter has booked a luxury cabin for us through Hidden Hills Cabins. I’m spoiled now.

We stayed in a beautiful two-story A-frame cabin with two bedrooms, two bathrooms, a special kid’s hideout, a big deck, and a fire pit in the backyard. According to my grandson, the best part was the hot tub on the deck. The cabin came with a washer and dryer, games, DVDs, towels, and linens. There was also a fully equipped kitchen. That was a good thing because we cooked all but one meal while there. We had planned to go out to lunch, but several restaurants were still closed for the season, and the others had at least an hour wait, which is not something we wanted to do with two young kids. 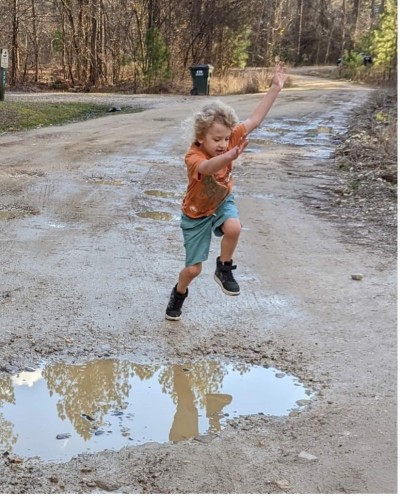 We took lots of walks, and there were plenty of puddles for Callister’s entertainment!

Cooking with the Grandkids

I was responsible for breakfast, and the kids took turns helping me. My granddaughter was my helper the first morning and surprised me by actually helping! We made monkey bread, vegetarian bacon strips, and potato pancakes from Trader Joe’s. The following day, Callister helped me make scrambled eggs and crescent rolls. I don’t enjoy cooking, but it was more fun with my grandkids helping and keeping me entertained. 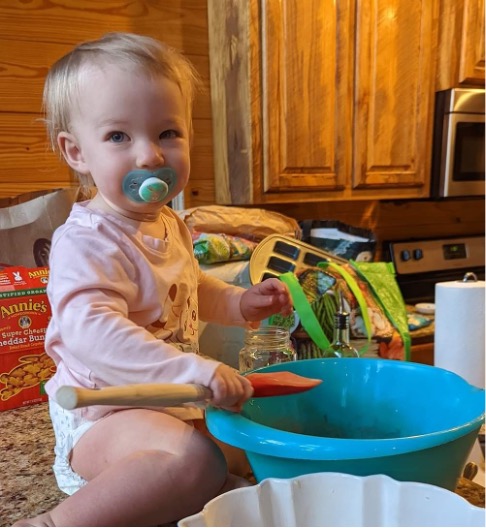 Sylvia needed her pacifier to get going in the morning, and I needed my coffee! Judgement-free zone!

Located in Hochatown, a relatively short drive from the cabins, was a bowling alley, miniature golf, pony rides, several gift shops, and the state lodge and hiking trails. Beavers Bend State Park and Nature Center was a short drive from our cabin area and provided beautiful hiking. Be aware there is a charge for parking that requires a credit card. Unfortunately, we were unprepared and had to hike back down to the car to get a card before starting our real hike.

My daughter loves to hike, but having the pack of little ones along led us to choose a short trail, just a little over a mile. I’m glad we opted for that one because it took a long time for us to complete even a short hike. The weather was perfect, and we frequently stopped for essential activities such as throwing rocks into the creek, getting our feet wet in the cool, crystal-clear water, walking across a fallen tree, and discovering dinosaur fossils (old sticks and rocks). We may not have covered much distance, but it was everything a hike should be! For more serious hikers, there are trails with various lengths and difficulties. 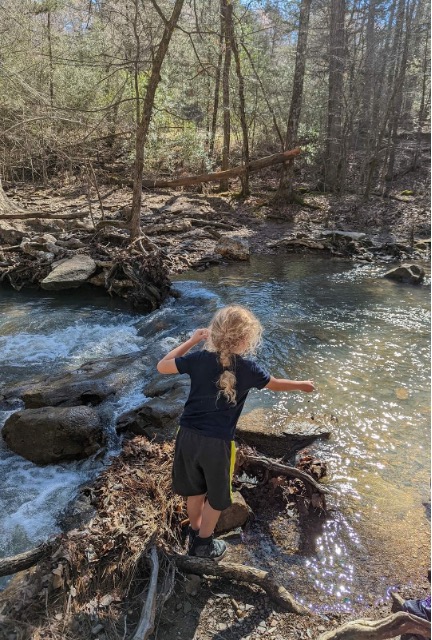 We chose the shortest hike, which was the correct choice for us!

We spent most of our time at the cabin. There was a big wrap-around porch where we played cornhole, sat, and enjoyed the weather while ensuring our risk-taking 17-month-old Sylvia didn’t escape or climb to the second floor without using the stairs. If you ask our four-year-old grandson what the best part of the trip was, I am almost sure he would say the hot tub. We kept the temperature low enough to be safe for him (95- 98 degrees), and he was either in the hot tub or begging to sit in the hot tub. If the dogs could talk, they would probably say their favorite part was all the walks they got to take in the beautiful wooded area around the cabin.

My favorite part of the trip occurred the last evening we were there. My daughter and son-in-law went into the nearby town of Hochatown and picked up pizza and sodas. My daughter pulled out the fancy wine glasses, and we had a soda tasting event. Everyone tried orange, strawberry, black cherry, and root beer (all non-caffeinated), and then we ranked our choices. Our grandkids never drink pop, so this felt like a big deal to them, and it was fun!

As the sun was setting, my son-in-law built a big fire in the fire pit, and we all roasted marshmallows and made S’mores. The best moment of the trip came later when my husband, grandson, and I were sitting near the fire pit with my grandson wrapped in blankets snuggled up on my lap. Callister is keenly interested in space and loves to talk about planets, stars, constellations, and black holes. Fortunately, my husband shares this passion. I don’t, but I loved the feeling of holding my grandson closely as we looked into the night sky and talked quietly. It was one of those moments you want to freeze in your memories. Being out in nature away from the bright city lights gives a new appreciation to the beauty of the night sky. 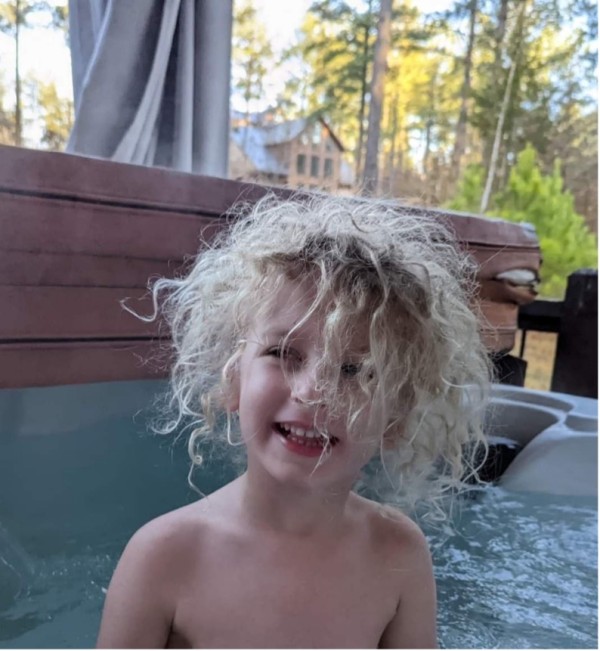 Our last morning there, we took another walk, sat in the hot tub, and then packed up. The trip must have worn the kids out because they were unbelievably quiet the entire way back to Tulsa. Sylvia slept so long my husband kept checking to make sure she was OK. We gave up all the pretense of trying to be model grandparents and allowed Callister to watch shows on his tablet as long as he wanted before falling asleep. At one point on the drive home, there was seventies music in the front seat, Wild Kratts coming from one car seat and cats meowing from the other. So much for family bonding in the car. Since we got back to Tulsa, Callister has been asking when we get to go back to the cabin. I take that as a sign the trip was a success. Happy chaos, but a success! 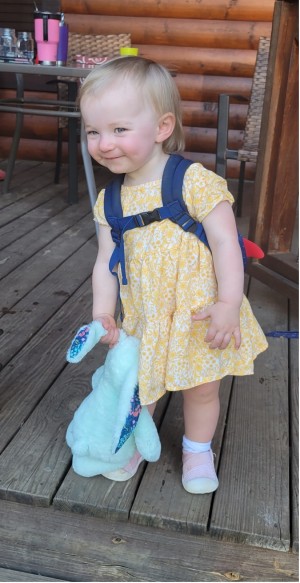 Sylvia with her backpack and bunny, ready to hike! 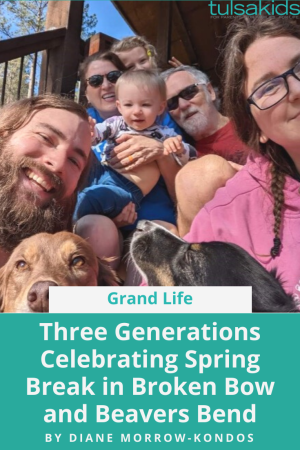