Why does talking about race issues make so many of us nervous or uncomfortable? In fact, even though I believed I was comfortable with the topic — having thought about race often throughout my life — I have had trouble figuring out how to talk about race. I have worried about how what I say will be perceived, and that has led me to repeatedly put off writing this article.

Yet, I’m determined to say something — to start a conversation. Why? Because understanding the influence of race on parenting and childhood is deeply important to the development of an open, welcoming, and diverse society. And, after all, there is so much each of us can add to the discussion. We all have a story and a perspective to share. But do we share them? Can we?

Mana Tahaie, [former] director of racial justice at the YWCA Tulsa, is confident that we can indeed talk with each other about race and work toward reducing, maybe even eliminating, racial bias (as well as other types of biases) in our community. To start off, Tahaie says we need to accept the fact that race exists, if only as a social construct or a manner of describing the pigmentation in someone’s skin. Tahaie cringes when she hears people say “I don’t see race.”

“You never hear, ‘I don’t see gender.’ That idea is so absurd,” she says. “Yet, we cling to this idea that it is physically possible to not see race.”

Tahaie points out that research has proven that children as young as age 3 make distinctions between people based on appearance and are beginning to have embedded relative values.

Felicia Collins Correia, [former] chief executive officer of the YWCA Tulsa and mom to Peter, who was born and raised in Tulsa, remembers “shopping” for child care in the early 1990s. “When I asked about the racial makeup of the children, most center directors thought the right answer was ‘we don’t see color.’ However, as an African American woman that was not the right answer,” Correia recalled. “I wanted them to see my son as a black child because that is who he is. I also wanted them to be trained to know how to respond when the other children who were not black would question him about his skin color and hair. I wanted teachers who would feel comfortable pointing out differences as just that–differences–and not better or worse.”

Most likely, statements about not seeing race are well-intentioned, Tahaie contends. “For years racial differences were violently or legally enforced; we thought we should just stop noticing it. But that doesn’t work.”

Whether we talk to our children about race or not, kids notice differences in skin color, as well as height, size, hair, voice, and other aspects of our individual appearances. In the beginning, Tahaie states, our kids just describe what they see or experience—they make observations, and not usually value statements.

“We load [the observations],” Tahaie says, and “make it seem like identifying differences is a big mistake. We yell, ‘Don’t point.’”

In this way, kids develop anxiety about differences between people which makes it harder for them to talk about and appreciate those differences both now and as they get older.

The message we really want to send is let’s not treat people differently based on their appearance.

So how can we send that message to ourselves and our children?

The YWCA Tulsa has adopted an anti-bias curriculum that addresses this question. The curriculum, endorsed by the National Association for the Education of Young Children (NAEYC) and designed for use with parents, teachers, and pre-school children, fits with the following four steps recommended by Shelly Tochluk, author of “Witnessing Whiteness: The Need to Talk About Race and How to Do It.”

Learn as much as you can about your own and others’ racial identities, ethnicities and cultures. Step out of your comfort zone. Meet and talk to people who are different from you, perhaps through a playgroup, a community center, or school-related activities. Encourage your children to do the same.

Critical thinking skills are the keys to success in our society. Encourage your children to be more critical about the messages they will inevitably receive about race and identity through television, magazines, and other media. Instill in them the ability to question what they see and hear.

Seek out resources to help you and your family with building knowledge and skills. A woman I recently met shared with me that her family had a tradition of renting movies every Friday night. For every Disney-type movie, they would always choose a thought-provoking movie on a culture or life experience they wanted to learn more about.

It’s difficult to change how we think in isolation. Tahaie recommends that we find others to work through these issues with -– in other words, people to “have your back,” to call you out when necessary, and to help you confront bias when you see it and hear it. We should have our kids’ backs in the same way. Allow them to make mistakes, but take advantage of the teaching moments those mistakes provide.

As Tahaie highlighted in our conversation, kids have a strong sense of justice and a healthy degree of curiosity. We should allow them to exercise those positive traits, even when it takes them to hard parts of our collective human history, such as the existence of racism and race discrimination. “The tough part is, you do want to shelter them,” she says. “But do you do them any favors? Will they be able to deal with the truth?”

And the truth is we live in a society in which race still impacts us, whether or not that is our intent. Let’s join together to make sure the impacts are positive for all of our kids. 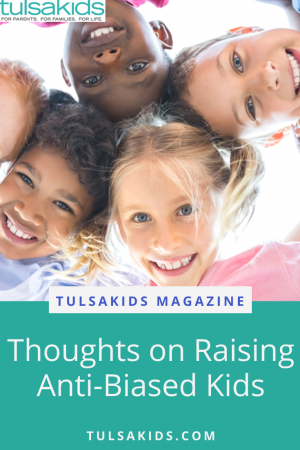