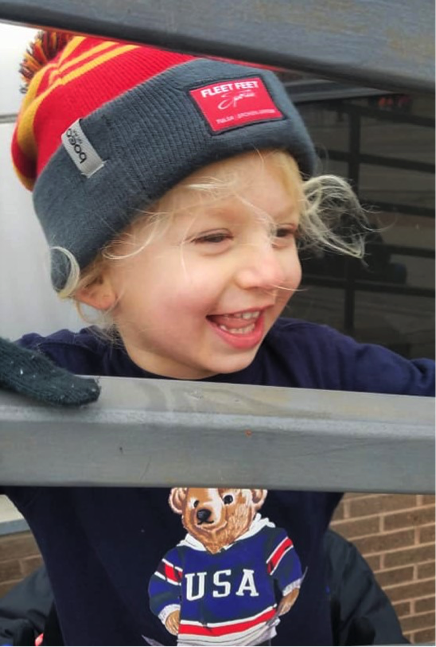 Maybe you’ve read some of my past blogs about being a grandmother? Maybe you remember me smugly bragging about what an easy, happy, compliant child my grandson is? That train has now left the station, waving a fond farewell to the “Land of Easy” and is now fully on the track for the “Land of No.” The easy-going kid has disappeared and, in his place, a somewhat feral child with a definite opinion and a loud voice expressing it has moved in.

As if a switch was turned on, Callister discovered the word no a month ago when he turned two and a half. It’s a discovery which he holds dear. I have my favorite words: nefarious, ubiquitous, malevolent, and pedantic, but I find it awkward to work them into everyday conversation. Callister has already mastered the skill of working his favorite word into almost every conversation. It’s a development that has caught me off guard, as if I didn’t parent two of my own kids through this very stage.

It HAS been almost thirty years since I had a two-year-old child, and like most mothers, I have selective memory recall. Did my daughters go through the “no” stage? I’m sure they did because it’s a normal part of the developmental process, but I guess I’m a history revisionist because in my mind, my kids were perfect. Obviously, that is absolutely not true, but in my rose-colored rear-view glasses, they were sweet little angels all the time. (I can imagine them reading this and laughing.) All those clichés about a mother’s love are mostly true. 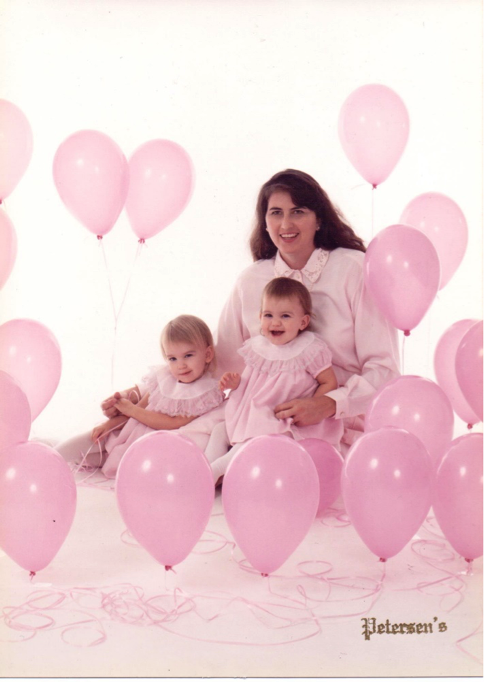 These are the angels I tend to think of from thirty years ago, but I do vaguely remember it wasn’t all pink balloons and pretty dresses.

Callister now answers most questions with a response of, “No!” Even when it’s something we know he loves like cookies, watching Toy Story, or going swimming, he has a negative automatic response. It’s taken me awhile to catch on and quit asking if he wants to do something if the topic is not actually open to debate. Last week when we were going to the Y to swim, he said no. I loaded him in the car and when we got to the pool, he was thrilled to get in. Don’t always trust a two-year-old’s words. Sometimes they do actually mean the “No” response, but sometimes they are just enjoying the verbal pushback.

According to The Bump , this is a completely normal development for a 31 month old (we’re still counting in months?!), and they had some good advice. This is what they have to say about it- “Saying no. Two-and-a-half-year-olds are notorious for saying no to just. About. Everything. Try not to pose questions with yes or no answers. Instead, give your kid two choices you can deal with, and let him pick.” This seems like a good idea, and I’m trying to remember to put it into action when I’m taking care of my grandson.

This weekend when we had Callister for our monthly sleepover, we tried to alter our pattern. Instead of giving him open-ended choices, we gave him two acceptable options, “Do you want to have pancakes or waffles for breakfast?” When it was time to do things he doesn’t like to do, like pick up toys before bedtime, we didn’t pose it as a question but merely said it was time to pick up toys. If there is no choice, don’t ask.

Another thing I thought about this weekend was how often we say no to him. Kids are great at mimicking, so maybe we could model better use of our words by rephrasing things? Of course, the word no is sometimes irreplaceable and unavoidable, but it would be good to work around it sometimes so they don’t hear the word no so often. Instead of saying, “No, don’t jump on the couch” we could reframe it in a positive mode such as “Couches are for sitting on, let’s cuddle up and read a book.” It’s a possibility I’m going to try.

It helps to know this is an important stage which serves a purpose. Two-year-olds are learning independence and desiring more control in their life. For the first time, they are realizing they are separate entities and they have a voice. It’s not always easy for the parents and grandparents, but it is an essential stage in the journey between infancy and adolescence. They are honestly not out to make your life more difficult, it’s just a bonus for them. Don’t worry, this too shall pass. We already see the “Land of Whys” is the next stop on our grandparenting trip. 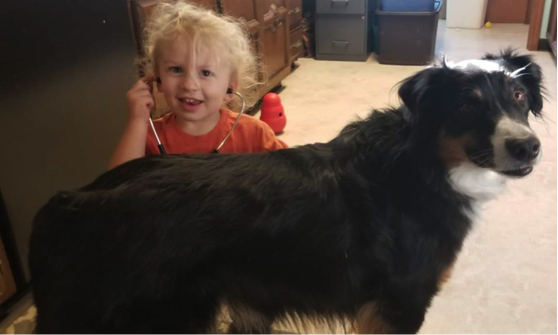 Why does the dog have bones? Why does he have hair everywhere? Why, why, why? 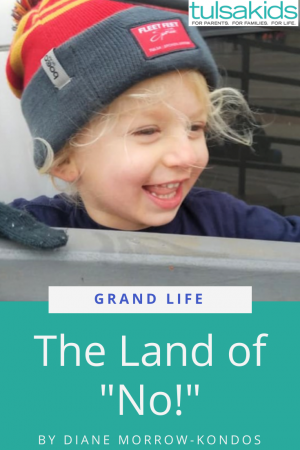