The Cutest Card Games for the Young and Young-at-Heart

My favorite card games that are both affordable and adorable.

I‘ve had a stack of card games sitting on my desk at work for awhile now. So in the name of office cleanliness, I’m going to finally write a blog post about some of my favorite cute card games! While I don’t play card games that often, I did start a small collection recently. This is because I realized that

Quick Digression on Playing Games with a Young Child:

Playing games with Joss is something I look forward to, but right now his favorite game to play is Hide ‘n’ Seek, which goes like this:

So I cover him up with the sheet on our bed, leave the room and count to ten, and return to find him jumping around on the bed, cracking up.

An alternate version is:

So it will be awhile before he can tackle a more complex game, like, say, War or Go Fish. (*insert loving eye-roll here*)

But when the blessed day comes that we can actually have a passable Family Game Night, here are some of our options: 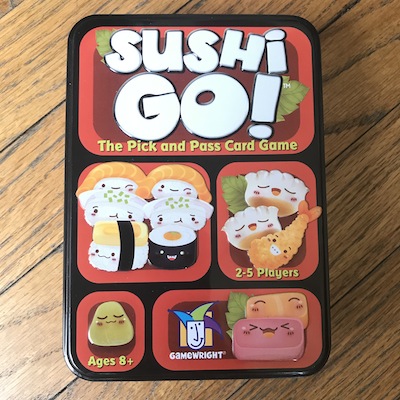 Sushi Go! is a 2-5 player game best for ages 8+, and, incredibly, the cuteness of the cards is matched in quality by the game play. In this game, everyone is dealt a hand. Each person chooses a card from their hand to keep, then passes their hand to the player on the left. This repeats until all the cards have been used. Each type of sushi or sushi accessory (wasabi, chopsticks, dumplings and pudding) has a different point value, often depending on how many you collect. 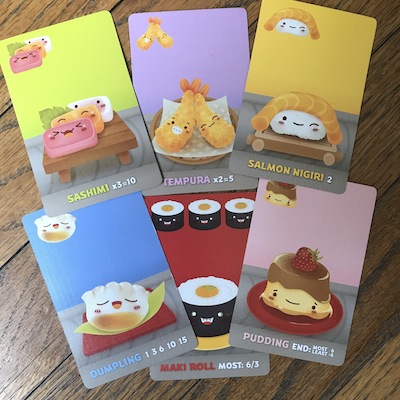 Another nice thing about these card games is that they require minimal brain-power, another plus when you’re a parent winding down at the end of a long day. 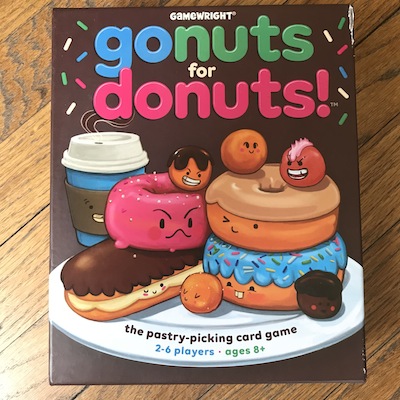 At first, I was afraid Gonuts for Donuts! (2-6 players, ages 8+) might be too similar to Sushi Go!, but I had to put it on my wish list because the cards are also irresistibly cute and–hey, donuts! But actually they are dissimilar enough that I’m glad to have both. While Gonuts for Donuts! is a 2-6 player game, certain of the cards are only to be used when you have a larger number of players (4-6 people instead of 2), so I’d recommend playing it in groups of varying sizes so you get to experience all the cards!

Let’s pretend you have three players. Each player gets handed four number cards (1, 2, 3 and 4). Then you turn over four donut cards. Each player decides which of the donuts they’d like to keep and, when the time comes, places down the number card that corresponds to the placement of the donut card they desire. If Player 1 plays his “2” card, indicating that he wants the second donut in the lineup, and Player 2 plays her “3” card, then they each get to keep their respective donut. If, however, they both choose the same donut, no one gets it. The donut cards are similar to the Sushi Go! deck in that each variety of donut has its own perks and points system. 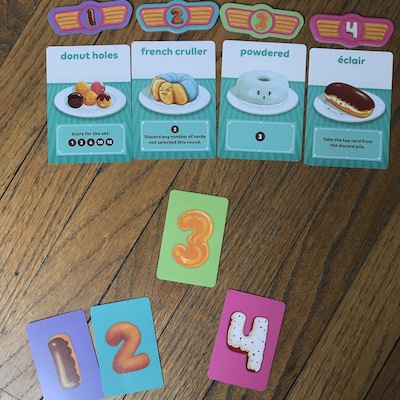 Both Sushi Go! and Gonuts for Donuts! are produced by Gamewright(R), who also produces popular kids games like Rat a tat Cat and Wig Out! 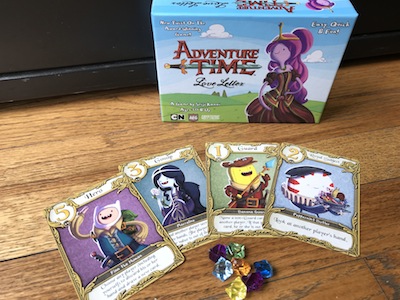 Best for ages 10 and up and 2-4 players, Love Letter is another fast but fun game to add to your card game library. Daniel and I have Adventure Time Love Letter, which…if my Amazon searching is not failing me, is selling for way more than purchased it for ($80?! I think not!)! As far as I can tell, Adventure Time Love Letter has very little to do with actual love letters, and I don’t know if the standard version does or not, but it’s still fun.

I don’t know how well I can explain Love Letter, as the rules are all in the cards. Each card has a different character (although there are some duplicates), with different perks or penalties attached. Whoever wins a round gets a sparkly plastic jewel (aka “token of affection), and whoever gets the requisite number of tokens first wins the affection of Princess Bubblegum, and therefore the game as a whole. 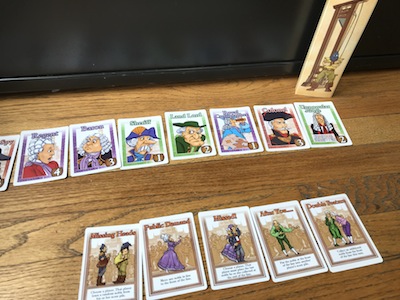 Although “The revolutionary card game where you win by getting a head,” aka Guillotine, may sound macabre, this is a silly, lighthearted game that is far less dark than the name suggests–plus, bonus points for a historical tie-in. Guillotine consists of two decks of cards. The first consists of nobles, each of which is assigned a point value (for example, the Countess is worth 2 points, the Master Spy is worth 4 points, etc.). Certain of these cards have additional instructions attached to them: as another example, while the Countess is normally worth 2 points, if you also end up with the Count at the end of the round, she is worth 4 points. At the beginning of the game, you line up 12 noble cards in front of a cardstock guillotine (see picture above).

The second deck consists of action cards. These cards allow you to rearrange the noble cards, which is important because the object of the game is to collect the noble cards with the highest points value. At the end of your turn, you get to keep whichever noble is closest to the guillotine. Each player only has five action cards at a time, meaning that while this game certainly requires strategy, there’s not so much going on that you can overthink it too much. 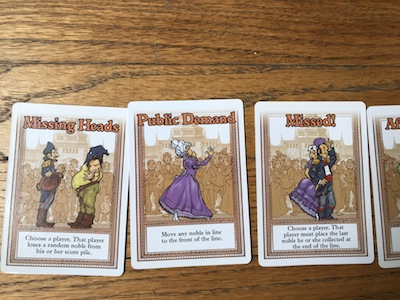 So there you have it! And please let us know: What are your family’s favorite card (or board) games? Bonus points for cuteness!