A Fun Weekend of Games, a Puzzle and Exploring Tulsa!

We’ve been enjoying some quiet weekends at home lately. But this past weekend, I wanted to get out and explore! We balanced our out-and-about time with playing some new games and tackling a 1,000-piece puzzle! Keep reading, and you may discover some new places to visit and things to do.

The first place we visited on Saturday was the new Dutch Bros. Coffee at 51st and Yale. We’d talked about it at the office last week. A coworker compared the drive-thru line to Chick-fil-a. It’s an accurate comparison! There is a two-lane drive-thru, and you give you order to an employee who walks up to your car with an electronic notepad. The two lanes zipper in to the pick-up window, although in our case, another employee brought our order out to our car, so we were able to bypass that. 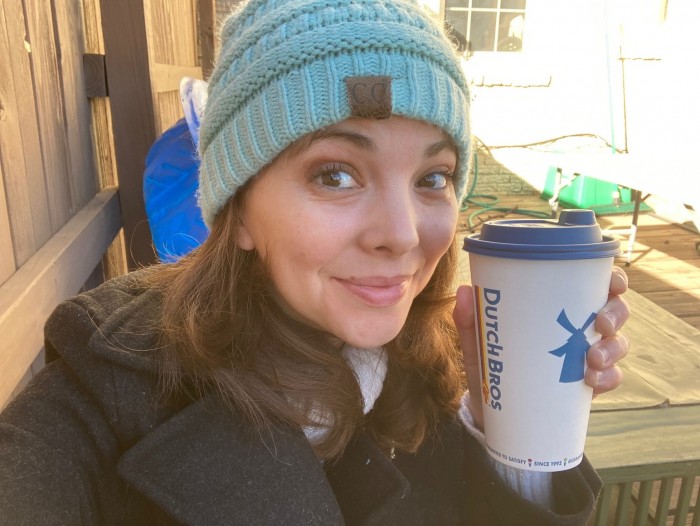 Ended up with a mocha. It was fine, but very milky.

I was not prepared for our first trip to Dutch Bros., as I was counting on being able to peruse the menu while making my order. So when they walked up to our car, I was caught off-guard and felt pressured to order ASAP, so as not to annoy the growing car line behind me. My advice to you is to browse the menu before going, so you know exactly what to order once you’re there. There’s also a park-and-walk-up window, which may have been a nice option. 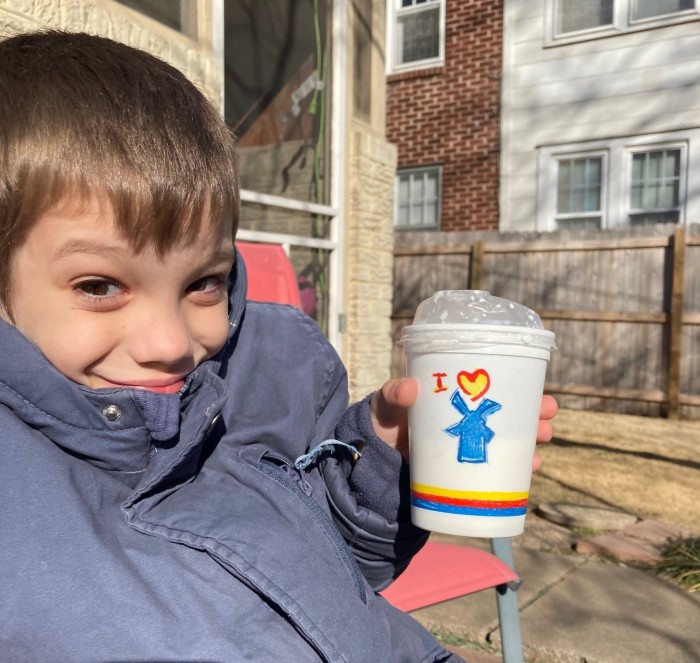 Bōn Broth Bar opened recently at 81st and Lewis, which gave me another reason to travel that direction – now that Lavender’s Bleu’s bookstore is closed. Nancy A. Moore interviewed owner Ali Hanson about her bone broth business for our Feb. 2021 issue. So I was excited to visit her new storefront a year later! 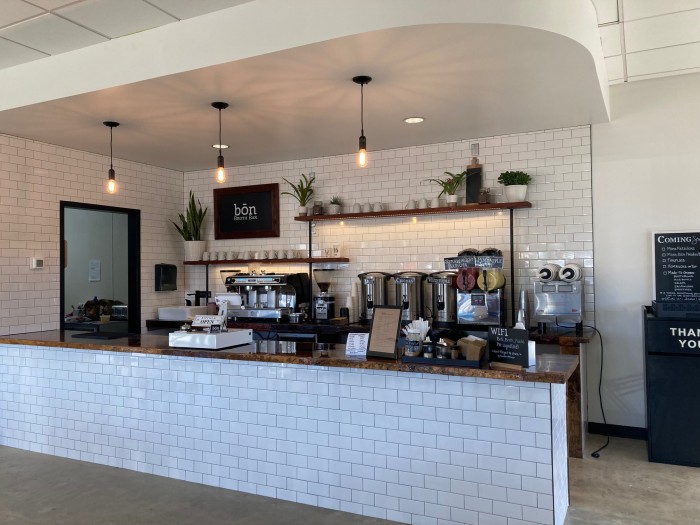 It’s a beautiful space, nice and light and very clean. And not only can you walk up to the bar to order bone broth to-go (or espresso drinks!), you can also shop the retail section. It’s full of local, healthy options like honey, nuts, frozen bone broth, meat etc. 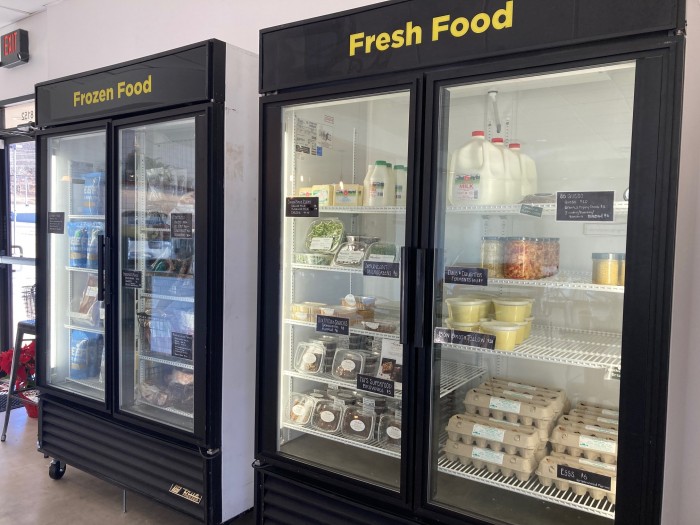 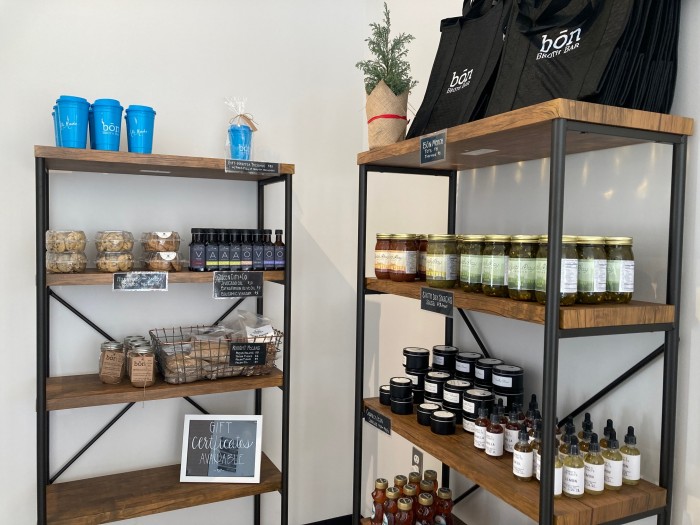 I ended up ordering a cup of the veggie broth, and Joss got a strawberry-banana smoothie. I’ve bought many a cup of coffee to go in my time, but this was my first time to buy sippable broth! It was really good though, with a very rich, complex flavor. And of course, I had to sneak a few sips of Joss’s smoothie, which was delicious. They also offer some food options, with more to come. 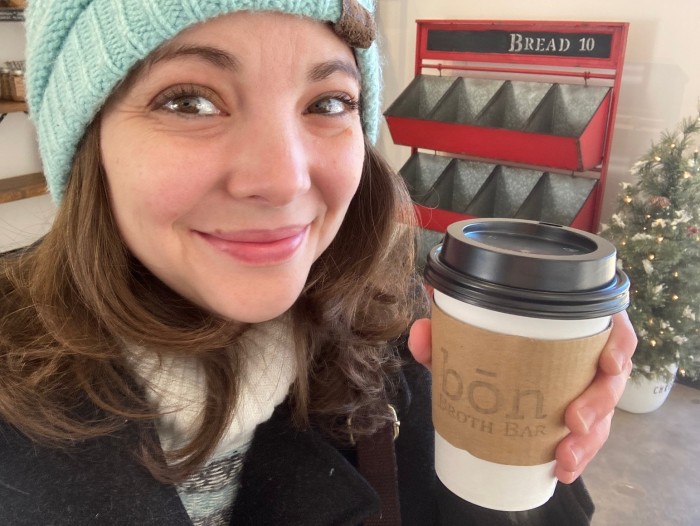 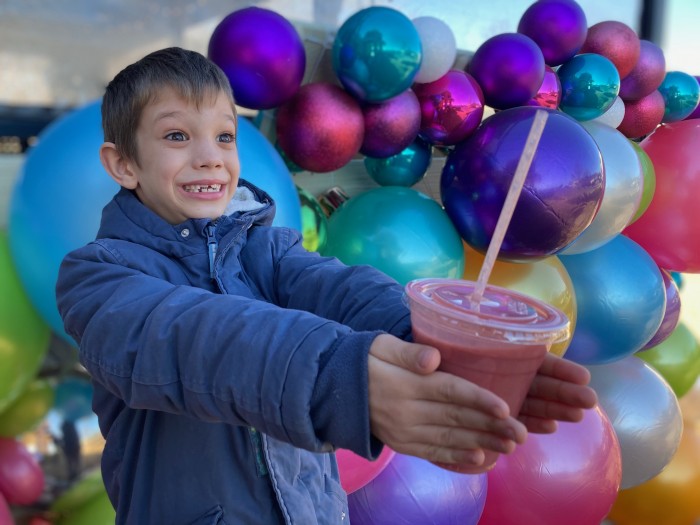 Check out the Bōn Broth menu and hours at bonbrothbar.com.

Thanks to a friend for introducing me to Southwest Trading Company, a new native-owned store on Route 66 (11th and Peoria). According to route66news.com, the owners are David Bible and his daughter Ashley, “citizens of the Muscogee (Creek) tribe in Oklahoma and of the Hopi tribe.”

Southwest Trading Company offers a variety of Native-made/handmade products, including beaded jewelry, the softest robes and blankets, clothing, art, pottery and other gift items. Learn more at @SouthwestNativeGoods on Facebook. 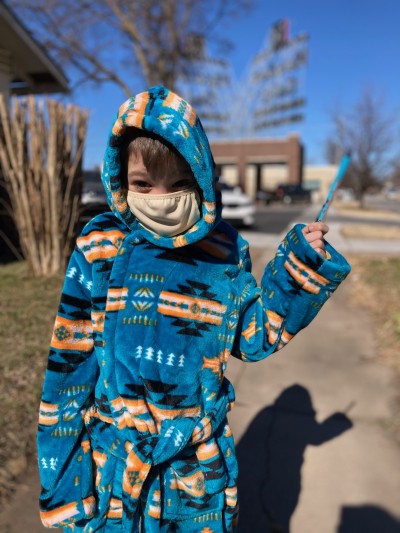 Joss got a new robe recently, but fell in love with this one at Southwest Trading Company. I couldn’t resist because honestly, although I also have a nice robe at home…these ones are soooo cozy! I wouldn’t mind having my own.

Whitty Books recently moved to a new location, just down the street from their former location. We were excited to see the new space, which is just around the corner from Circle Cinema. I didn’t get any pictures, sadly. But I remember them posting on social media that they’re excited to expand their children’s/YA offerings. Which is fantastic! Anyway, the new space is bright and colorful, and a lovely place to shop.

I limited myself to just one book, but caved when Joss asked for a sushi puzzle. (They have several nice puzzles and games available.) I didn’t realize just how daunting a 1,000-piece puzzle was going to be! 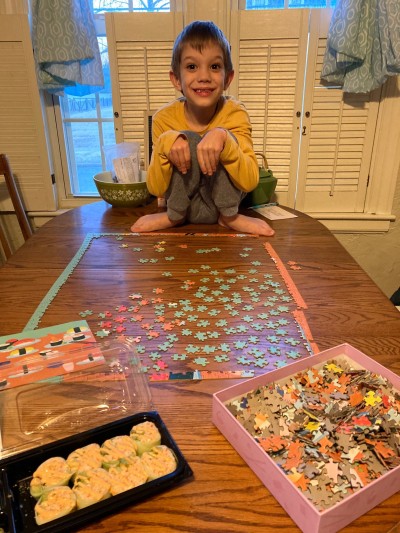 Thankfully, Daniel stayed up late Saturday night and spent a good portion of Sunday working on it, so instead of taking us a week to put together – it’s done! 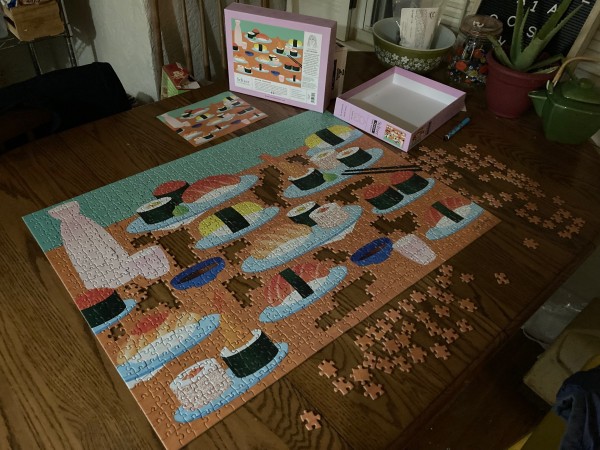 Thanks to the puzzle and some new games (not to mention the adventures), we spent very little time on screens this weekend! Joss had received Pokémon Battle Academy from my brother for Christmas. He’s starting to get excited about Pokémon, but we didn’t know how to play the game. Pokémon Battle Academy comes with three pre-made decks, plus instructions for how to play and a nice board to lay everything out on. So now I can say: I know how to play Pokémon! We still have to tackle the advanced instructions booklet, but the easier version was easy to pick up. Plus, Joss trounced me our second game because I couldn’t get the cards I needed! So there was a nice, level playing field. 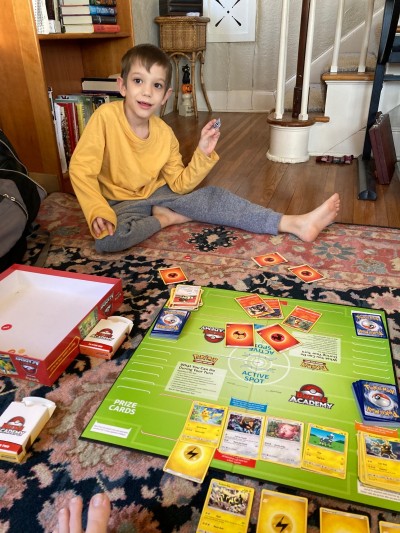 Additionally, Joss and I spent some time at Philbrook on Sunday. Thanks to our Cat Trophy Scavenger Hunt success, we had a $50 Philbrook gift shop gift card. It truly is the best gift shop. Of course, I had to buy this “Fly Widow” game, which is basically Old Maid, but with “murder, intrigue…and flies!” 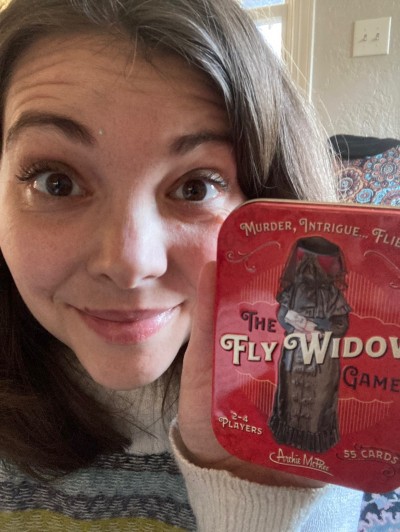 Honestly, I don’t know if I’ve played Old Maid before. I’m sure I have, but it’s been awhile. Joss and I played one round, which mainly taught us that, although it can be played with two people, more would make it much more interesting. Also, I probably should have remembered that Joss has been scared of bugs lately before inviting me to play it with him. #fail

The other game I found at Philbrook was Eidos. I had to buy this because it’s basically an art-lover’s version of Spot It!, which Joss played for the first time in a recent therapy appointment. It can help with focus and paying attention. So finding a version at Philbrook meant I didn’t have to order it elsewhere! There are multiple variations, but the easiest is for each person to turn over a card. On each card are several images. For each pair of cards, exactly one of the images will be present on both cards. So the first person to find the double shouts, “Spot it!” and gets to collect the cards. It’s very simple. Also a good opportunity – as I learned at his appointment – to work on sportsmanship (saying “Good job!” even if you don’t win), and following directions. Aka, making sure to yell “Spot it!” when you win, and not “I found it!” or something similar.

Anyway, it was a fun weekend! What new businesses have you visited lately? Any new games to recommend? Comment below! 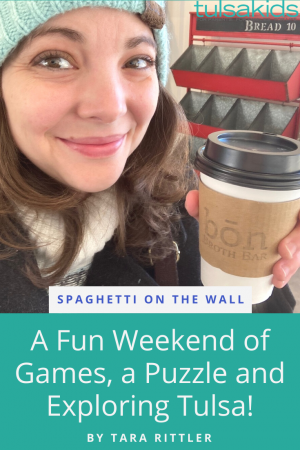