Thanksgiving – Time to Pass the Matriarch Crown to My Daughter

I‘ve turned the matriarch crown over to my oldest daughter, and I couldn’t be happier! My younger daughter and I discussed it, and we both felt like Alexandra was the natural choice to take over the duties. She is organized, gets things done, loves to plan and cook meals, and as the oldest child, she has natural leadership qualities. No, I did not say bossy. I said leadership. It may be a little soon, I’m not dead yet, but I am more than ready to pass on the crown, or in this case, the apron.

I’ve never been especially domestic, although I think my daughters will attest to the fact I gave it a valiant effort for the eighteen years they lived at home. I wanted my kids to have healthy meals, and I liked the ritual of family meals, so I sucked it up and cooked. When they left for college, I had the kitchen remodeled, and thereafter it became known as the coffee-making room. I liked my new no-cooking lifestyle, but my family had other thoughts. Caroline, the youngest daughter, came home from college for the summer, and Alexandra stayed in Stillwater. I overheard them talking on the phone, and Caroline said, “Don’t worry, you’re not missing anything. Mom doesn’t cook anymore.” I can’t pretend she was wrong. I had faked being Susie Homemaker for 18 years for the sake of my kids, and it was time to shed the disguise.

My domestic rebellion had early roots during my high school days in the dark ages, the 1970s. It was an era during which girls and women were fighting, and still mostly losing, against a male-dominated society. Girls in high school in Tulsa, Oklahoma, were expected to take Home Economics. I had already fought and won the battle to be on the boy’s Varsity swim team (because there wasn’t a girls’ team), so I decided to take on the authorities about the misbegotten idea that girls needed to learn to cook and sew. I went to the counselor and argued my case to NOT take Home Economics. Somehow 16-year-old me convinced the school counselor that it was my right to refuse to be enrolled in the class. Looking back, I’m kind of impressed with my nerve. I have no regrets.

I do have regrets when it comes to the phase when I was a full-fledged adult, yet I showed up for holiday meals at my parents’ house with a token contribution of a bottle of pop or a store-bought pie. I took my parents and their hospitality for granted. I didn’t realize the energy, the work, the money it took to host a big family meal. I was thoughtless.  I’m much less impressed with that version of my past self. It was only after my parents died and I became the family matriarch that I realized how much work goes into being the person who organizes holiday get-togethers.

I might be a little more inclined to enjoy cooking if we didn’t have such diverse dietary restrictions in our family. With three vegetarians, a vegan, and a gluten-free person, the menu and cooking become complicated. I’ll just tell you there have been more than a few vegan, gluten-free disasters that I have ended up throwing in the trash. It’s a waste of time and money. My daughter Alexandra and her husband enjoy the challenge of cooking vegan and gluten-free. I don’t understand that love of cooking challenges, but I sure appreciate it! If you have guests with varied dietary restrictions attending your holiday gathering, maybe you can relate?

Now, with my oldest daughter being the newly appointed matriarch, we will more fairly divide the tasks. She’ll tell us what to do and what to bring, and we’ll comply.  The Thanksgiving meal will be at our house because we have the biggest kitchen, but we’ll share the work so we can all enjoy the holiday. Food is a major focus, but Thanksgiving is about the joy of being with people you love. Last year, we didn’t get together because of Covid. This year there will be twelve of us together to share our gratitude for another holiday shared with family and friends. I’ll make sure I contribute more than a bottle of pop, but I’ll also be thankful that I no longer wear the crown or the apron of the matriarch of our clan. All hail Queen Alexandra!

I hope your meals are delicious, your family dramas mild, and your team wins the game! Happy Thanksgiving to all! 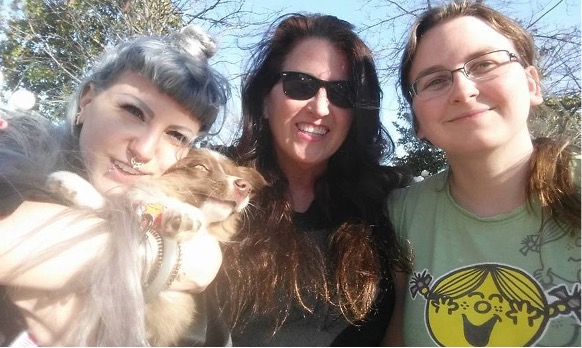 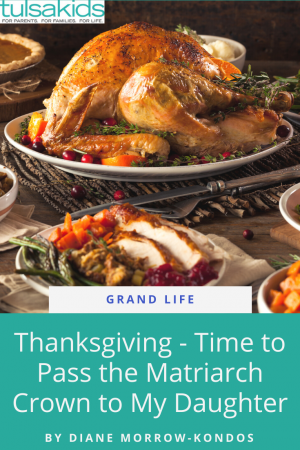