In an effort to keep their respective robotics programs afloat, students and teachers from throughout the Tulsa area are working to raise enough money to bring a FIRST Robotics regional competition to Tulsa.

Although the Oklahoma City-based regional has existed for the past 10 years, it’s the only in-state option for Oklahoma’s robotics students. As a result of being unable to afford the travel cost, some Tulsa schools have had to drop their robotics programs.

“It costs $4000 to register, and that’s not even including the hotels and the travel costs,” Jenks High School Senior Lily Tennekoon said. “Having a competition in Tulsa would not only allow our teams to stay at home, but it would also support Tulsa by having teams from outside areas come to our hotels and eat at our restaurants.”

The movement recently gained some traction with a $25,000 contribution from Williams. According to a teacher associated with the cause, there are several other companies that are looking to help, although they can’t officially provide funds until their next fiscal year.

“With Tulsa being so prominent in engineering and with all of these companies around here who are looking for students who are going to be engineers, it’s going to be great motivation for them to invest in this and get their name out there,” Memorial High School Senior Chase Parker said. “On top of that, it will just bring a bunch of new talent to see the Tulsa area.”

It isn’t all about engineering, though, as Tennekoon stressed that virtually any type of company could benefit from supporting this cause.

“While engineering plays the biggest part in this, we have students who are interested in business, medicine, and law,” she said. “First and foremost, what we have are creative, hardworking, passionate students and what we really want to do is express that to companies who are able to help.”

Although the Jenks senior said she is generally optimistic about her school’s support for STEM education, her team has seen its fair share of shifts throughout the past two years.

“A couple of our mentors weren’t able to continue with us and our lower levels of the robotics program have been cut,” Tennekoon said. “Of course, we’re working to make sure that that doesn’t happen at the high school, but it definitely has been a struggle.”

That said, these students’ aspirations extend beyond just sustaining their own programs.

“After this first year with the regional, we’re definitely going to be raising awareness for other teams that may be struggling and maybe they can seek similar sponsors,” Parker said. “Also, I’m sure word is going to spread about that, and this will lead to the regional happening year after year because we’re accumulating more sponsors.”

Additionally, having one more competition grants opportunities for teams across the world to travel to Oklahoma, including teams from Mexico and California who regularly attend the OKC regional.

“For me, this program is about learning real-world skills that I’m going to use at my job,” Cascia Hall Senior Julian Zanders said. “Our community is one in which we help each other, but to do that, you need to plan, anticipate outcomes – so many real-world skills can only be learned by doing them.”

Tennekoon celebrated FIRST Robotics’ unique approach to learning, as well as its ability to break boundaries among fellow students.

“I’ve met so many people from around the world with different skill sets, ideas and backgrounds that I wouldn’t have known otherwise,” she said. “There’s a magic to this program – nothing tops it.”

Even beyond education, though, these competitions have showcased a refreshing degree of sportsmanship.

“When you see these sports teams come out and trash talk the other team – FIRST is the opposite in that it’s always about ‘Hey, it’s randomized teams of three, so you never know whether these guys can help you out and lead you to victory,” Parker said. “You build relationships with all of these teams and I feel like – more than working with the team of people at your school – it’s about working with a team throughout all of Oklahoma.”

According to Zanders, some teams will even dedicate some of their members to helping other teams program their robots “just so that they can have a better day.”

To support this cause, visit the Green Country Regional page at https://oksef.org/green-country-regional. 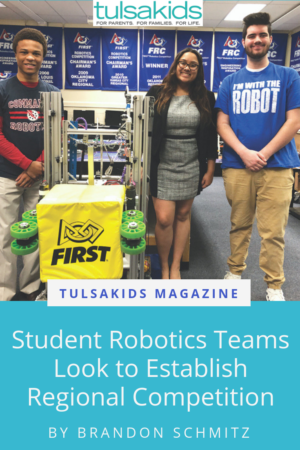