Stop What You’re Doing and Join a Buy Nothing Group

If you read my blog regularly, you know that we moved across town last week, which I never, ever, ever want to do again.

The only thing worse than packing everything you own up, loading it onto a trailer, and unloading everything is unpacking all of it.

You start off with good intentions. After all, moving is a fresh start. It’s a chance to make sure everything has its own perfect little place. This time, it will be different, you tell yourself. This time, socks will be bundled neatly in a KonMari-approved method, and kitchen utensils will be organized in accordance with Stewartian law.

But the weirdest part about moving is that in the process of individually touching everything you own, you get to take a sort of inventory. Nothing formal, of course. But somehow through the process of unpacking, you realize you’ve been hanging onto doubles, triples, even quadruples of things simply owing to the fact that you couldn’t find the item in question when you needed it and necessarily picked it up again.

I’m convinced the Millennial obsession with tiny homes is just another manifestation of the generation’s fantastical ability to spin straw into gold–we spent a short period living in a fifth wheel with the kids while caring for my mom on hospice, and it was such an unpleasant experience no one speaks of it. It’s just something we all silently acknowledge and try not to think about.

Our former home was no tiny house, but it was significantly smaller than our new place with minimal storage space. No amount of Pinterest could help us get organized with three kids, and every storage solution required a fair amount of improvisation and compromise, which meant no one knew where everything was and we frequently ended up with redundant purchases.

Unpacking our new place has been a stunningly revelatory experience. That’s how I learned we had a play tent to create a cozy little reading nook in Arthur and Lucy’s room. Where did it come from? A mystery. I uncovered several diaries from my tweenage years, where I rediscovered apparent obsessions with the Gulf War, Arsenio Hall, and shipping my best friend Miranda with her on-off boyfriend. 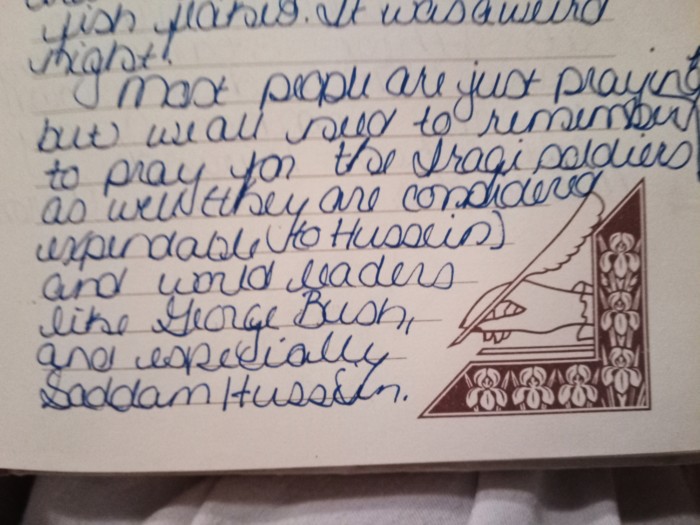 I also rediscovered my habit of shoving things in boxes and forgetting about them for years. That’s how I found these treasures, among others:

Many folks would toss these fine items right in the garbage with no thought of concern for the landfill where they would go to rest indefinitely, or at least until a zombie survivor’s group builds them into the walls of their trash fortress.

But I knew just what to do with them.

You see, I’ve been active in the Buy Nothing Project for a few years now as part of our family’s commitment to moderate voluntary simplicity.

How the Buy Nothing Project Works

What is the Buy Nothing Project, you ask? Begun about six years ago, it’s a movement to create a locally-based gift economy. I was originally part of an earlier variant on this called Freecycle. Freecyclers commit to reducing their consumption by regifting their items to their community. Buy Nothing is in a similar vein with the added goal of getting people connected with their local community. If Freecycle is Altavista, Buy Nothing is Google.

People use Buy Nothing for different reasons, like these examples:

Buy Nothing Groups are found on Facebook and based on where you live.

These are the basic rules:

Justin and I originally signed up when we lived near the Hills, and we were active in our South Tulsa/Jenks group for a long time. Once we moved, we had to leave our old group and join our new one, Buy Nothing East Tulsa.

One thing I noticed immediately is that each group seems to have its own culture. At first, this was a little jarring for me, but I quickly realized that’s part of the community basis of the project that makes it cool. I’ve lived back on the east side a week and I’ve already had several people friend me and invite me over to craft or drink wine. This is especially cool as I gain my footing and learn about all the things people do with kids out here and get a feel for the community.

Typically, folks in my new group will list giveaway items and let them simmer for a few days then pick which of the folks showed interest to gift the item to. This gives everyone a chance to see the post and gives the gifter an opportunity to make sure you don’t have everything going to just the same person every time.

It’s up to the gifter entirely to decide the terms of the gifting.

With all the things I need to gift, I posted a “Flash give.” I listed many items in a single thread and immediately granted the items to the first person to pipe up showing interest. Usually when someone is coming by, I will place their items on my front porch for them to grab since I’m pretty busy glued to my computer all day and don’t have time to chat.

I’ve already given away quite a few things, especially early reader books my kids have outgrown.

When we got here, we needed a new mattress for Arthur. While not everyone is this lucky, I was offered a twin mattress, box springs, mattress pad, and headboard within a few hours of posting the request.

I’ve also taken a few items others have posted. One group member offered a bag of whipped and miscellaneous yogurt, telling me that her mother has groceries delivered to her home but doesn’t always pick things she likes. Lucky for us, my kids could eat yogurt all day.

I also got a really nice white table lamp that came with an invitation to a party.

As I was passing through my living room this morning, I realized that several of our furniture pieces are secondhand items we got as regifts either through Buy Nothing or other resources. That includes a beautiful large glass shelf inside our entry door and both our sofa and loveseat.

In many ways, the gift economy improved our family’s life when we were at our financial lowest, and we’ve tried to return the favor. When an older veteran in my old group kept repeatedly asking for basic necessities, I connected with a group of friends I knew IRL to gather several bags of groceries and toiletries for him. I’ve never had a lot of financial resources or material wealth, but I’ve always been great at rallying my connections, and I try to use that to help others whenever the opportunity arises.

Take a look around your home. Chances are there’s something you really need that someone else might have just lying around taking up space. It’s not just a handout–you’re helping someone else clear out space and make an environmentally sound move.

Chances are just as good you’ve got something lying around that you’re hanging onto and you don’t even know why. You might think, “Who in the world could want this creepy old porcelain doll?” or “Surely no one needs a set of mismatched plastic kids’ cups.”

I promise, somewhere in your community someone would love nothing more than to use that doll as a kitschy decoration. Someone else is starting over with nothing, and those plastic kids’ cups would be a blessing to them.

Are you convinced yet? 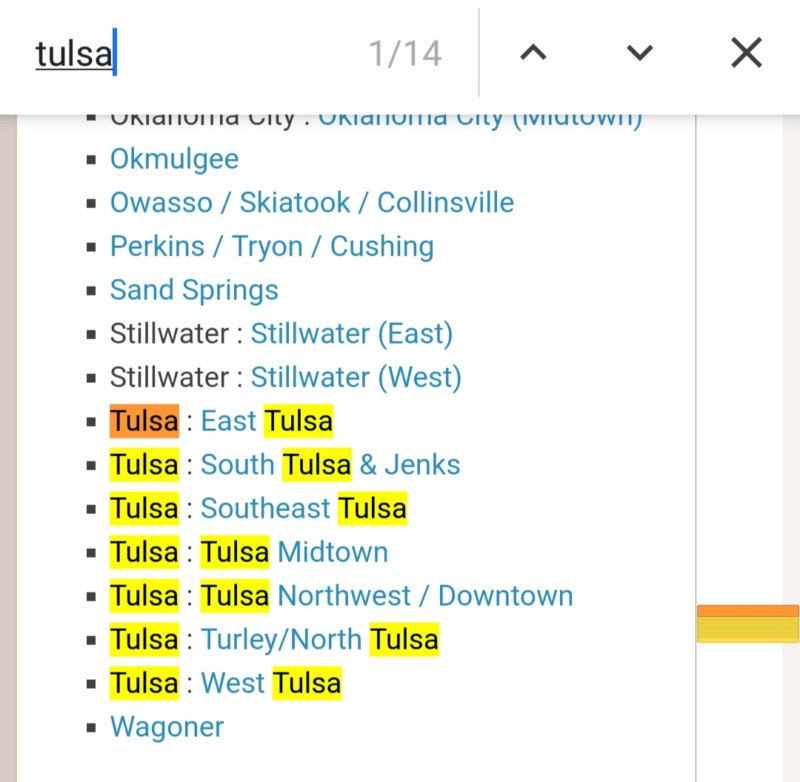 Go on The Book of Faces and join your local Buy Nothing group and then let me know in the comments! Visit me on our TulsaKids’ FB and let me know all about your gift economy commerce! And remember, kids, if you come across any Star Trek toys, send them to our TulsaKids office ℅ Kristi Roe Owen of the Coffee Nebula.

Thanks for reading as usual and have a beautiful week. 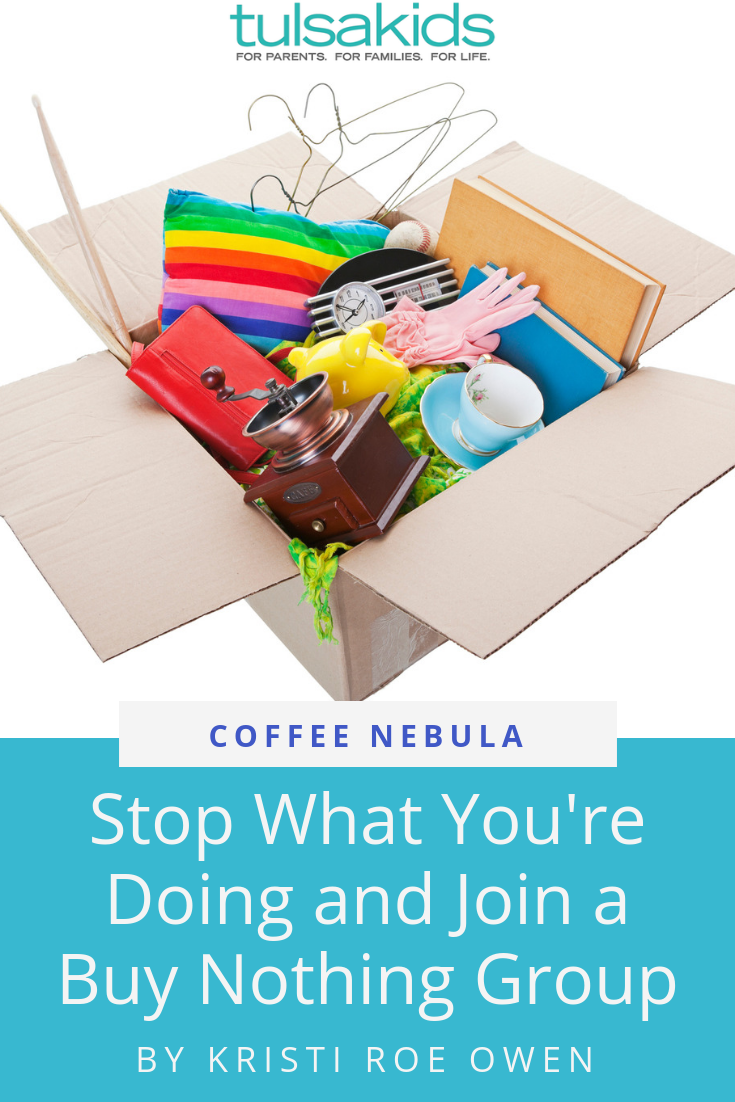