Special Needs Focus: Who Knew Bathrooms Could be Such a Problem? 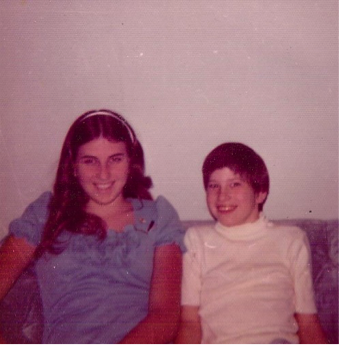 As a young teenager, all I longed for was to fit in or realistically, to just fly under the radar. Yet, with my younger brother attached at the hip to me, it wasn’t possible. We were noticed and usually not in a good way. My brother looked “normal,” and his appearance was part of the problem. Because he didn’t have any of the readily identifiable features generally associated with people who have special needs, his behavior and speech were unsettling and unexpected.

The bathroom situation was one of my most dreaded issues as a sibling who often had responsibility for my brother. When out in public with my brother the need often arose for him to use a public restroom. This was in the ’60s and ’70s, long before such a thing as the family restroom existed. I was faced with a dilemma, did I let a ten-year-old boy go into a men’s restroom on his own or take him into the women’s restroom? He was able to go to the restroom alone, only needing assistance with zipping up afterwards, but he was vulnerable to possible taunting and teasing prompted by his strange noises and behaviors. My imagination was probably going wild as I imagined predators lurking in wait, but I always chose to take him into the women’s restroom with me, often getting very strange looks and comments. I was embarrassed, but my brother was safe, and that was my priority.

My brother is now 56 years old and when I take him on outings, I look for family restrooms, but they are still rare. I no longer take him in the women’s restroom, but instead I opt to stand outside the men’s restroom looking like a strange creeper. My brother’s disabilities have become more visibly obvious through the years, and I’m less afraid by the thought of predators, as he’s thrown a few hard punches to people who have threatened him. Yet, I still worry. He has also developed obsessive-compulsive disorder and despite being on meds for it, he will sometimes get caught in a loop of handwashing or door touching that needs to be broken by verbal prompts. So, there I am, standing outside the men’s bathroom occasionally pushing the door open a crack and calling in to him. When he exits, I ask, “Did you flush and did you wash your hands?” And always the reminder to zip up. 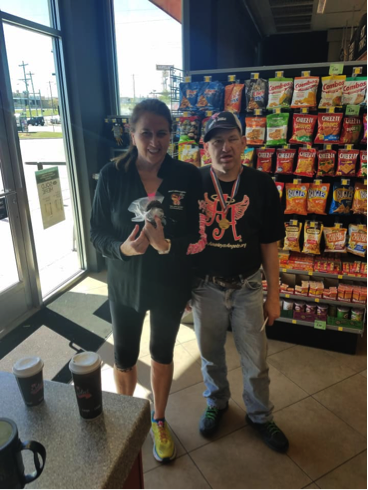 Donuts with my brother after a recent Ainsley’s Angels 5k run.

Yet, I also am so incredibly grateful my brother is physically and mentally able to go to the restroom fairly independently. I know many people are in a much more difficult situation. We need family restrooms, and in addition, we need these family restrooms to have adult changing tables! Very few places have adult changing tables, making outings almost impossible for those adults with special needs that include the use of diapers.

Changing tables designed for babies normally have a weight capacity of fifty pounds, making them unusable for adults with special needs. I know several people who have been forced to use a dirty bathroom floor as a changing table for their loved ones. When we say accessible for all, we need to think beyond wheelchair ramps and low sinks. It may be a fact we don’t like to think about, but for many people, the need for adult changing tables is a reality of life. Arizona recently passed a bill requiring all new or renovated government buildings to have adult access changing tables. I know the Tulsa Zoo has an adult changing table, what other places in the Tulsa area have this?

Representative Mickey Dollens has initiated a bill called Max’s Law in Oklahoma that would require adult changing tables in new or renovated buildings that serve 1500 or more people a day. It’s a start towards true accessibility and inclusion for all. Family bathrooms and adult changing tables may not be on the forefront of most people’s minds, but for a family with adults with special needs, it can make the difference between being out in the community or staying homebound.

The embarrassment I felt as a teenager having to take my brother into the women’s bathroom has turned into frustration with the lack of family bathrooms. For now, I’ll continue to be the weird woman people stare at when I poke my head into the men’s bathroom saying, “David, flush the toilet, wash your hands, and zip your pants,” and feel grateful that he can. 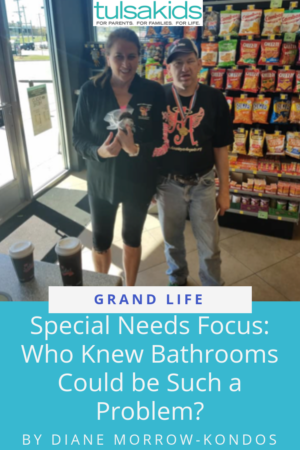