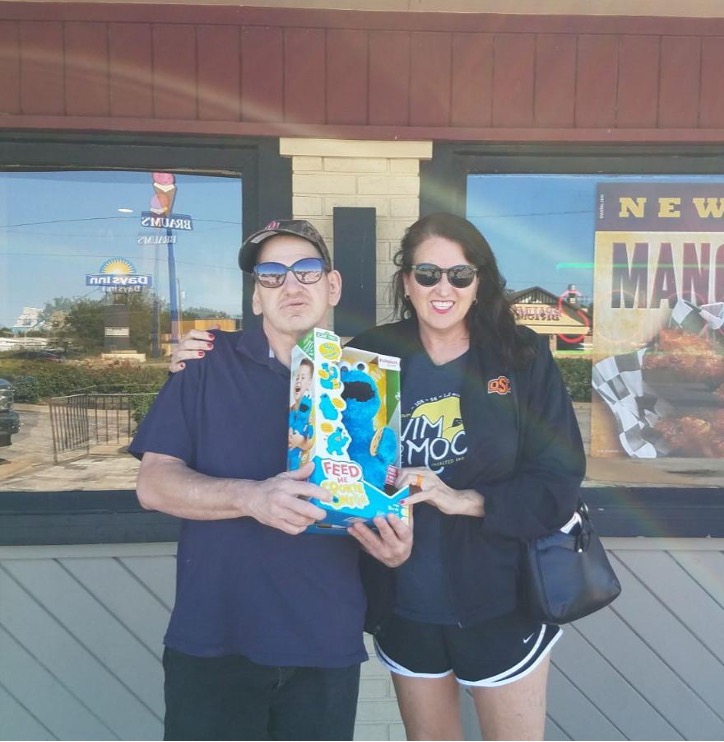 He’s able to make his love of Sesame Street and Mazzio’s well known!

When I first started working at a hospital straight out of college (about 40 years ago – yikes!) I remember being told to always assume the patient can hear and understand you, even if they appear to be non-responsive. I also remember responding affirmatively and politely but thinking, “Well, duh, why wouldn’t you?” I had been practicing that skill since my brother was born. My brother has limited ability to communicate effectively, but he appears to understand almost everything. It’s hard to imagine the frustration the gap between understanding and being able to communicate must cause!

My brother never ceases to amaze me. OK, if I’m honest, it’s not always in a positive way, but that’s a story for another day! My brother is intellectually disabled, and because his speech is difficult to understand, I sometimes underestimate him. Then he does something to remind me he is taking in way more information than he can express. We were recently watching his favorite movie, Smoky and the Bandit, a movie we have been watching since it first came out in 1977. We are now at approximately the thousandth viewing mark, and that may be a low estimate. I knew he could recite many of the lines by heart, but this time we let the credits roll all the way to the end. While I was looking for the remote control, he read off every single name! Not just Burt Reynolds and Sally Field, but every single name! I sat there shocked. It wasn’t the first, and it probably won’t be the last time I underestimated my brother’s abilities.

I know my brother isn’t the only one to have a large discrepancy between what he understands and what he can express. Although my brother is intellectually disabled, there are many reasons for language expression difficulty. Expressive language disorders can be linked to autism, genetic issues, developmental delays, brain trauma, or stroke. If you have a child who isn’t hitting the expected language milestones, check with your pediatrician about getting an evaluation. Early intervention is essential! Click on this link to learn the normal range of expected language milestones in the first five years. Another excellent local resource is Sprouts, a child development team that does developmental screening and therapies.

When my brother and I talk on the phone, the conversation is almost always the same every night. If you listened in, you would hear what sounds like a list of one-word demands from him. There’s not a conversation in the sense that most people use that word. Our nightly talks consist of him listing things he wants – candy, Coke, notebooks, pizza, a cowboy hat, and money. I sometimes make attempts to expand the conversations a little, but he usually resists. As we’ve grown older, he has given up on attempting to talk much because he has realized most people don’t understand what he’s saying. That has to be so discouraging. I think about how I felt when my husband and I got lost in the rain while riding mopeds in the Italian countryside. We stopped in a few places and tried to get directions, but no one could understand us. It was a frustrating experience, but it was one day in our lives. Not being understood is an everyday occurrence for David and many other people.

What should you do when talking to someone who has difficulty with language? Always give people the benefit of the doubt, assume they understand you. Speak directly to the person, not to their parent or friend, or caregiver. Be patient and slow down. If my brother knows the listener is attentive and patient, he is much more likely to try to say the words. Using context is helpful. I know what my brother likes to talk about, making it easier to figure out some almost indecipherable words. He does occasionally stump me, like last year when we were talking about his birthday present requests. He kept saying the same two words over and over. Fortunately, he was patient, as I kept guessing. Finally, I figured out he was saying Andrew Jackson, and as the superior sister-detective I’ve become, I realized he was asking for a twenty-dollar bill! I do know my brother loves money! Like I said before, if I take the time to listen, my brother will surprise me with what he knows. Above all else, be empathetic and always be kinder than necessary! We all want to be heard. 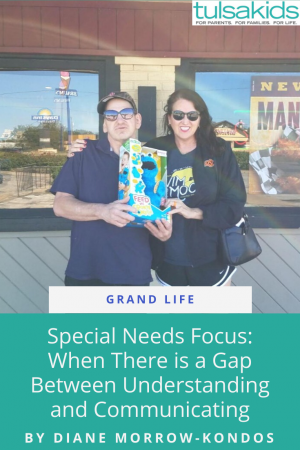