Special Needs Focus: The Meaning Behind the Medals 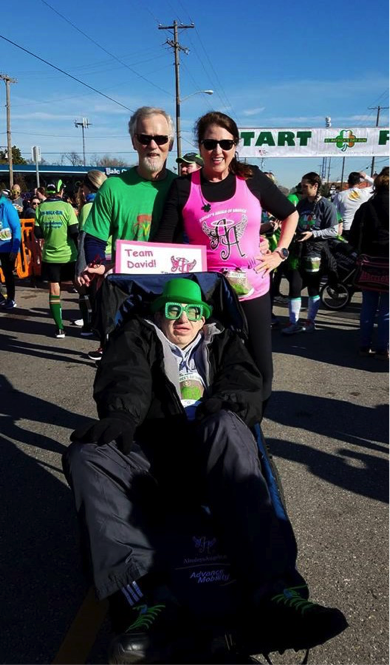 I should have known better. I think I’m a fairly insightful person and I think I know my brother well, but somehow I missed the important role Ainsley’s Angels has in his life. Ainsley’s Angels is a group of runners who push people with disabilities in racing wheelchairs. It’s a nationwide organization, and Tulsa is lucky to have a well-organized and active group!

Because I’m involved in the triathlon community, I kept hearing about Ainsley’s Angels and seeing Facebook posts about many of my acquaintances being Ainsley’s Angels runners. It looked like so much fun, but I didn’t think it was anything my brother would be interested in. At one time he had loved being active, but now he was a 56-year-old, sedentary man with painful scoliosis and limited vision piled on top of his intellectual disabilities. After some persuasion from Jana Rugg, the local coordinator, I decided to ask David, fully expecting a negative response. Instead, I got an enthusiastic “Yes!” from him.

Our first race was the St. Patrick’s Day race in March of 2019. In preparation, I bought my brother a St. Patrick’s day hat and sunglasses, which he was excited to wear. We loaded him up in his Ainsley’s Angels “chariot,” and off we went for a 5k jog on a beautiful sunny day. My husband did most of the pushing because he’s much more fit than I am and my brother isn’t exactly a small guy. Each “chariot” has a sign with the name of the rider, so bystanders and other runners were calling out his name, which made him smile and clap his hands with glee. He waved to the crowds like a small-town queen riding on a homecoming float.

It was a great experience, but I didn’t give it that much thought until a few months and a few races later. For years I had tried to convince my brother to let me decorate his room, but every time I hung posters on his wall or put up family pictures, he tore them up and threw them away. Ever the eternal optimist, I created a bulletin board with his Ainsley’s Angels racing bibs and pictures from the races, his medals hanging on the corner of the board. Miraculously, the bulletin board stayed put! Except for the medals because he wanted to wear them all the time. It was apparent the medals meant something big to him, but I still didn’t totally “get it.”

Meanwhile, although I enjoyed the Ainsley’s Angels experience, I viewed it as simply pushing people in a 5k, a mere athletic event followed by our now-ritual stop at QuikTrip for coffee and doughnuts. It’s fun, my brother loves it, so we kept signing up for more. Not that big of a deal, right? 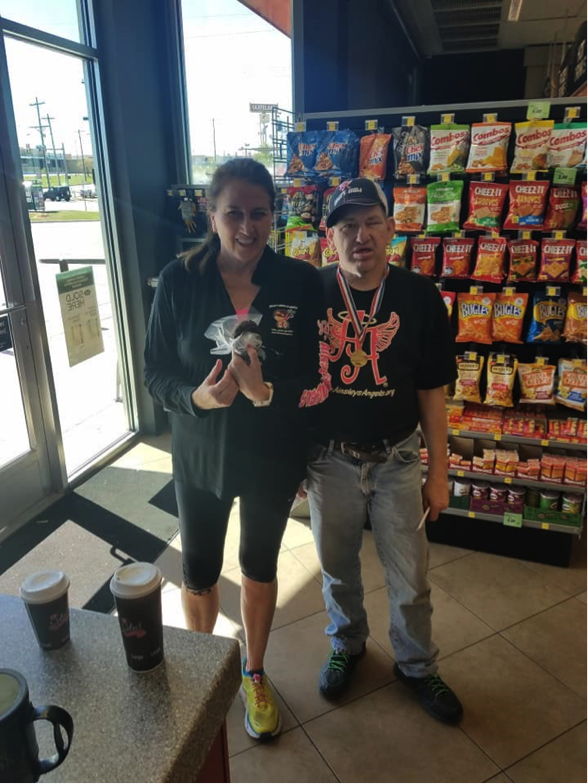 The post-run stop at QuikTrip has become part of our ritual.

But this past weekend at Night to Shine I had an epiphany. A startling moment of clarity brought on by a pain in my brother’s leg. Let me explain. We were in line for the red carpet at Night to Shine, the annual prom for people with special needs. My brother, who rarely complains about pain, kept grabbing his leg in pain, saying, “My leg, my leg.” He has limited communication skills and couldn’t tell us what was wrong, but he could barely take a step without severe pain. He managed to get down the red carpet because nobody wants to miss that moment of glory, and then collapsed into a nearby seat.

My brain went into high gear, trying to figure out what could be wrong all the while envisioning a trip to Urgent Care. When I knelt beside him to try to calm him, I noticed his pants pocket on the afflicted leg was bulging full. He has obsessive-compulsive disorder, and picking up trash is part of his routine, so I assumed it was trash. I asked him to empty his pockets and it was a moment of wonder, like when the magician pulls out the scarf and it just keeps going and going.

The first thing that came out confirmed my suspicions, a rock hard, moldy green, half-eaten Sonic hamburger. But that was only the beginning. What came out next was all of his Ainsley’s Angels medals, a few of them sporting sharp points that had been poking his leg with every step. It took a little persuasion, but he agreed to entrust me with his medals for the evening. He got up and walked off pain-free to enjoy the evening with his buddy. 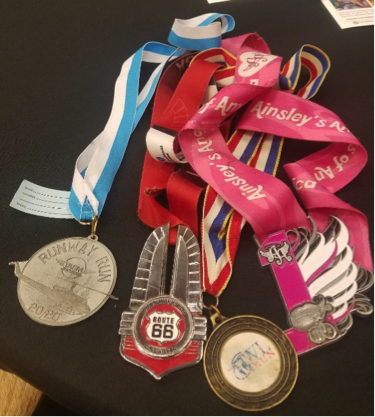 He pulled all of these medals out of his pocket. No wonder his leg hurt!

As he spent the evening dancing, I sat in the caregiver’s room reflecting on the significance of my brother having all the medals in his pocket. It was so ridiculous I had to laugh, but it also touched me on a deeper level. These medals were not just shiny objects on pretty ribbons, they represented something important to my brother. The medals say he is part of something bigger, he is part of a team, he is an athlete.

The things I have always been able to take for granted in my life have been denied to him. He always wanted to be an athlete and because of Ainsley’s Angels, he now sees himself differently. His self-esteem is improved, and he feels accepted. It’s a lot to come from a simple run, but now I see it’s not just about the running or even his beloved medals. I finally understand. It’s about inclusion in the community, it’s about empowering people to be their very best, it’s about relationships and respect. Go Ainsley’s Angels, go Team David! 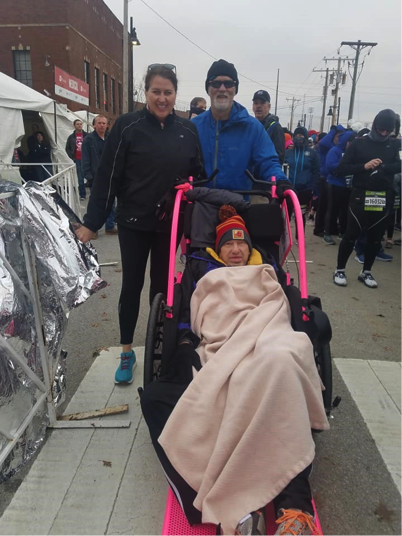 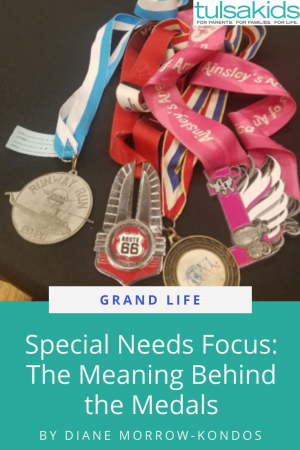