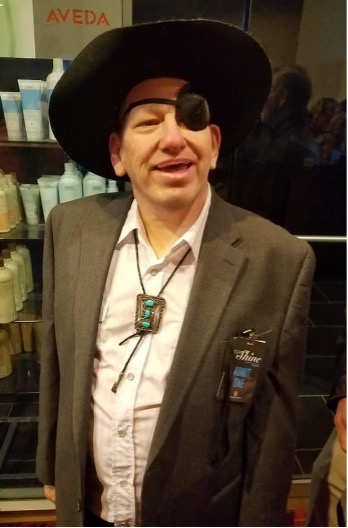 Last week my four-year-old grandson was over for a Fall Break Bonus Sleepover. As we always do on sleepovers, we conducted a science experiment. We’ve done this one before, and it’s a favorite because of all the fizzing frenzy. It’s called the lava lamp experiment, and here is the link in case you’re interested.  After we were finished, he accidentally knocked the big glass over. The oil, water, and food coloring poured all over him, the chair, and the kitchen floor. It was a shock, and my usually happy, easy-going grandson burst into all-out sobbing. I stripped him down, wrapped a towel around his slippery oil-coated body, and my husband carried him to the tub. Callister was still crying, but as the warm water enveloped him and I attempted to scrub the oil off, we started talking about how everyone occasionally has accidents or makes mistakes. Then we started laughing about the absurdity of the entire experience. We found a way to make jokes out of a messy situation.

Finding the humor in situations has helped me survive many less-than-great episodes in parenting, grandparenting, and being a sibling to a brother with intellectual disabilities. It’s a skill I had to learn as an adult because I certainly didn’t possess that ability as a child growing up with a brother with disabilities. I grew up in the ’60s and ’70s, an era when disabilities were rarely discussed openly. I heard the term “mentally retarded” used about my brother, and I knew he had problems communicating, but my understanding of the situation was limited. I often wondered if perhaps I was also “retarded” (mentally retarded was the medical diagnosis and proper term at the time)? Like my brother David, I also had speech issues that required years of therapy, and no matter how hard I tried, I could not understand the math lessons taught at school. As we got older, it became apparent my brother’s issues were more severe.

I was often embarrassed by my brother’s behaviors in public. David flapped his hands, made strange screeching noises, bit his hand until it bled, and even banged his head against cement sidewalks when he got mad. I was a shy child, unsure of my abilities, and I had no emotional resources to deal with my brother’s actions and my correlating embarrassment. I did the best I could, providing care for him, taking him places, and dealing with the outbursts and public stares. My only tactic was pretending to ignore the stares and comments, but that strategy proved ineffective.

It took me years to find a better way to deal with my less-than-perfect feelings about my brother’s appearance and behaviors in public. After our parents died eleven years ago, I became David’s guardian. Thankfully, my brother was already well established in a home, and although we both grieved for the loss of our parents, the transition was made smoother by my parents’ planning. The change to me being “his person” came with some adjustments for both of us. My mother had been an amazing caregiver to my brother. Almost too good. She never said no to him, and it didn’t take long to realize her clown-sized metaphorical shoes were way too big for me to fill. I didn’t have the money, time, desire, or the emotional energy. I had to find a balanced place with my brother, and part of that search was resolving my complicated feelings about what it meant to be David’s sister and guardian.

The pivotal moment for me came about a year after our mom’s death. My brother and I were doing our typical visiting day, making the rounds of Wal-Mart, Mazzio’s Pizza Buffet for lunch, and Braums for dessert. I must pause the story here to describe my brother, and I need you to try to visualize along with me. At this point, he was in his early fifties, a little overweight, and burdened with painful scoliosis that caused him to walk somewhat crooked. That day he was wearing his beloved denim overalls and two cowboy hats. Yes, you read that right. He had two cowboy hats placed, one on top of the other on his head. If one is good, aren’t two even better? Oh yes, he only has one eye, which is a tragic story I will spare you at this point, but a feature that almost always causes people to stare. David had made hasty work of his banana split, and we had cleaned up the table the best we could, so it was time to leave. I got up and started walking towards the exit, turned around, and David was gone! I panicked for a second and scanned the restaurant until I spotted him underneath a table on his hands and knees! My brother has obsessive-compulsive disorder, and he cannot leave a piece of trash anywhere, so he was on his hands and knees underneath the table picking up trash. It was quite the sight! 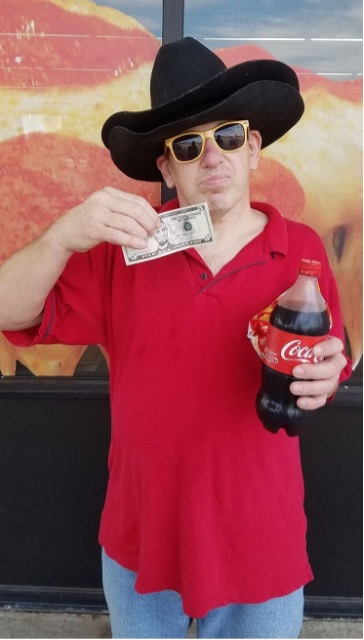 David rocks the two hats look minus the overalls this time.

I will never forget that moment. As I said, it was a pivotal moment in my role with my brother. I could choose to be embarrassed and scold my brother for actions that were really out of his control, or I could choose to find the humor. The scene was so absurd that I burst into laughter and went over and helped him clean up the scraps of trash. Were people in Braums staring at us and judging us? Probably so, but from that point on, I decided to care more about my brother’s feelings and experiences than what others think. As long as his strange actions aren’t affecting another person, I will embrace the humor. I will accept my brother for exactly who he is, a one-eyed intellectually disabled man with obsessive-compulsive disorder who wears overalls and two cowboy hats! His disabilities are not funny, but the situations we find ourselves in often are humorous. When there’s a choice between laughing or crying, I’m always going to go with the laughter. The journey assigned to my brother is not always easy, but laughing together makes life so much more fun for both of us! As Jennifer Jones said, “If you could choose one characteristic to get you through life, choose humor!” 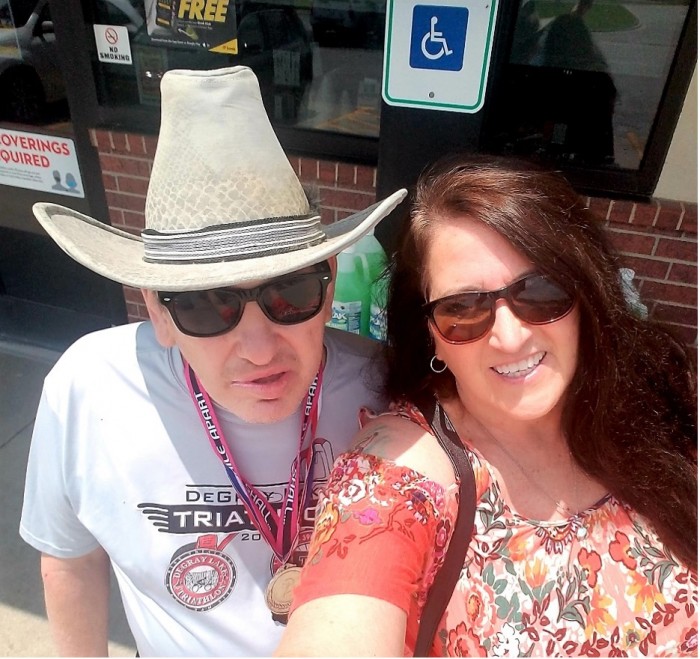 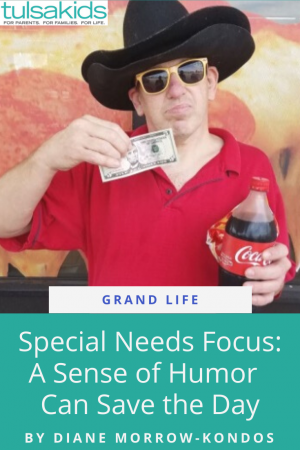