Guidance Over Violence: Why Spanking is Not Good for Your Child and What You Can Do Instead

I was spanked, and I resent my parents for it to this day,” Tulsa mother and grandmother Rhonda Reid said. “I only spanked my own son a couple of times, and will never spank my grandchildren. Hitting doesn’t prove anything and only serves as a substitute for real parenting. Discipline and spanking are not the same thing, and I prefer guidance over violence.”

Reid’s assertion comes from experience, but her experience is now backed by piles of research on the subject.

The American Academy of Pediatrics (AAP) recently strengthened their long-held statement against spanking. The current official statement is as follows: Aversive disciplinary strategies, including all forms of corporal punishment and yelling at or shaming children, are minimally effective in the short-term and not effective in the long-term. With new evidence, researchers link corporal punishment to an increased risk of negative behavioral, cognitive, psychosocial, and emotional outcomes for children.

The AAP cites multiple studies that show spanking is not an effective way to teach children right from wrong. It may provide an immediate desired result but may also likely have long-term results of increased aggression and defiant behavior.

The studies cited by the AAP show that spanking produces results that are similar to children that are physically abused; corporal punishment has also been linked to actual changes in the brain. There is some evidence that young adults who experienced harsh physical punishment are at a greater risk for reduced gray matter volume in the prefrontal cortex, the area that plays an important role in social cognition. In a small study group, those participants who were physically punished also had a lower performance I.Q.

Ashleigh Kraft, LPC and clinical director at The Parent Child Center of Tulsa, a child abuse prevention agency, says that one of the dangers of spanking is that it can sometimes escalate to more abusive behavior.

“The Parent Child Center strongly supports the recent stance the AAP has published about the negative effects of spanking,” Kraft said. “At best, spanking is a missed opportunity, and at worst it is tremendously harmful. We work with both parents who have been abusive, and children who have been abused. Parents are often frustrated and angry when their child misbehaves. When you combine those intense negative emotions with spanking, there is just too much risk of a parent going too far. This risk increases when parents use implements to spank such as switches or paddles.”

Like many parents, Tulsa mom Jennifer Meyers was spanked as a child, and spanked her own children, but none of them remember it as being a serious event.

“I was spanked,” Meyers said, “but not often enough to take it seriously. I did spank my own kids. I think it broke them out of the moment of disobedience, if that makes sense. It put an immediate stop to the behavior, and let them know I meant business. When they became teens, they confessed that most of the time the spankings didn’t hurt and they would actually chuckle when I left the room, so I don’t think they were exactly traumatized by it. My husband was much more patient (most of the time), and he would spank them, then sit down with them and talk about what they’d done, pray with them, and usually encourage them to apologize to whoever they’d hurt by their actions.”

While spanking may stop the immediate behavior, Kraft says it doesn’t allow parents to use discipline strategies that develop a child’s character and values.

“The parent forfeits the ability to use a strategy that teaches the child about how to behave, why people behave in that way, and how their misbehavior may have harmed the child or someone else,” she explained. “A primary goal of parenting is for children to be able to make wise, safe and kind decisions independently across settings. The children must internalize norms and values that guide their behavior.”

Alternative discipline methods require that parents make a commitment to have a discipline plan in place and to control their own anger. It also helps to approach the child from a place of empathy and respect, and to know something about child development. Tulsa mom Hope Jordan and her husband take a long-term view of how gentle discipline techniques will benefit their child’s emotional growth.

“I was hit as a child, as was my husband,” Jordan said, a “We do not spank, not only because our child is a person, and no person deserves to be hit, especially our smallest and most vulnerable, but also because it doesn’t teach them anything in the long run. Gentle parenting takes so much more time and effort, but it is what is best for our small humans.”

Discipline literally means “to teach” and involves the thinking part of the child’s brain. To discipline a child requires the adult to show and explain the desired future behavior. This is best done through role modeling, positive words and positive reinforcements. Punishment is fear-based and focuses on inflicting pain for past behavior, which negatively impacts the emotional part of a child’s brain.

If a child is in frequent fear, his or her brain produces a high amount of the stress hormone cortisol which provokes the fight or flight response, leaving the child’s emotional brain in charge. Parents use physical punishment because it does achieve some level of short-term success, but the child may pay a big price long term. If a child’s brain stays in the fear mode for extended periods of time, the results may eventually be anxiety, depression and post-traumatic stress disorder.

While parents like the Jordans have made a conscious choice to use alternatives to physical punishment, other parents feel that spanking is an integral part of their belief system and their biblical values. One study showed that 85 percent of Evangelical Christians practice spanking as a form of discipline for their children.

Many Christian parents find biblical support for physical punishment, with Proverbs 13:24 being the most often quoted: “He that spareth his rod hateth his son: but he that loveth him chasteneth him often.” This verse is usually paraphrased “spare the rod, spoil the child,” but another version of this verse is “whoever spares the rod hates his son, but he who loves him is diligent to discipline him.”

A Tulsa mom who responded to a question about spanking on TulsaKids’ TulsaParents Facebook page used Proverbs 22:15 from the Bible as her reason for spanking: “Foolishness is bound up in the heart of a child, but the rod of discipline will drive it far from him.”

Not all Christians, however, adhere to those biblical interpretations. Thomas Haller, an ordained minister and parenting and relationship expert, has studied the biblical perspective on spanking. Haller spent eight years studying Hebrew and Greek to enable him to understand that Bible in its original language. He interprets Proverbs 13:24 as a verse imploring parents to guide their children. Haller says the Hebrew word for rod (shebet) was most often used in reference to the stick shepherds used when tending their flock, but it was used to gently guide their sheep in the correct direction, not to hit them. Haller says the point that God is making in this verse is to ask parents to hold their children accountable for their choices and actions, but he emphasizes that physical punishment does not need to be part of teaching accountability to children. Haller also reminds us of a verse admonishing parents, Ephesians 6:4 “Fathers, do not embitter your children, or they will become discouraged.”

Spanking and other forms of physical punishment have been shown to be potentially physically and psychologically harmful, but that doesn’t mean there should not be discipline. Tulsa’s Parent Child Center offered this advice: “Discipline is most effective when it is kind, clear and consistently applied. A strong relationship between a parent and child is the most effective tool a parent can have when trying to discipline a child.”

The staff at The Parent Child Center of Tulsa teaches parents to match discipline to their child’s developmental age. When parents have unrealistic expectations of what their children can and should do at various ages, it can result in overly harsh discipline.

For example, most children do not potty train by age 2, but they may be curious about the potty. A parent may assume that curiosity means that the child has complete control over his or her bodily functions at age 2. It is important for parents to understand what is developmentally appropriate for children at different ages.

“When parents expect the child to be able to have that kind of control necessary for potty training, they become frustrated,” Kraft said, “However, what is most appropriate in this instance is for the parent to adjust his or her expectations of the child.”

For very young children, discipline techniques largely involve redirecting the child’s attention from one item to another, removing unsafe or off-limits items from reach, and providing appropriate supervision and containment.

Consistently reinforcing positive behavior is an effective discipline technique for children of all ages.

“Toddlers and older children respond well to specific praise for desired behaviors, such as ‘Thanks for putting your plate by the sink, Luke’,” Kraft said. “We know this increases the likelihood that Luke will put his plate by the sink again. Children want to please their parents, so pairing praise for desired behaviors with ignoring undesirable behavior can be effective.”

Another positive technique is to use rewards as children work toward agreed upon goals.

“Children respond well to being offered goals to work toward,” Kraft said. “A parent might have a chore chart for a child and when they earn 5 stars, the child gets a reward such as 30 minutes later bedtime, extra screen time, or an item from the dollar store.”

Other discipline methods that the Parent Child Center staff teaches are time in (as opposed to time out), offering choices, and showing parents how to set up appropriate consequences for misbehavior.

Some may argue that many generations were spanked without harm, but the evidence doesn’t support that belief. As L.R Knost, founder of Little Hearts/Gentle Parenting Resources, said, “Discipline is helping a child solve a problem. Punishment is making a child suffer for having a problem. To raise problem solvers, focus on solutions, not retribution.”

It’s important that your expectations for behavior are developmentally appropriate and that your child knows what is expected. Keep the rules clear and be consistent with enforcing them. Each child may respond to a different form of discipline. Here are a few suggestions: 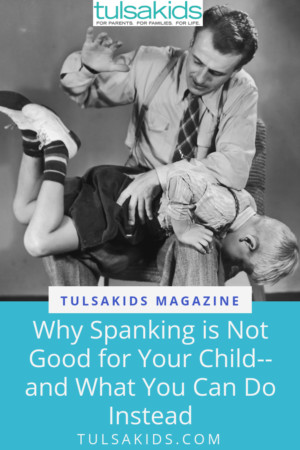