Something to Live Up To…

Anna America,
SHARE:
All in all, I’m a pretty good person. I pay my taxes, don’t litter, volunteer regularly, go to belong to a church, use my turn signal, and do all the other things that would garner bonus points if you were playing a board game called “Are YOU really a good person?”
I’d like to think I’d be JUST as good of a person if I didn’t have kids. But that would be lying, something which I try not to do – at least not in front of my kids.
Because as familiar and beloved as they are, I’ve realized that in some ways, how we behave in front of our kids is how we behave in front of guests – most of us try to do things like eat healthier food and drink less, be more polite and less profane, and all in all, act like the kind of people we’d like them to grow up to be.
(Kind of like how when you have company, you pretend the cat isn’t allowed to walk on the table and the dog doesn’t lick the plates clean. Oh, you aren’t pretending? Uh, yeah, me neither!)
Or like a few weeks ago when I baaaaaarely just slightly accidentally scrape another (yes, fine, PARKED!) car while I was parking at my son’s football practice, and my 9-year-old daughter, who was with me says, “Can’t we just leave?”
At another age, in what seems another lifetime, I might have been tempted. OK,  I WAS tempted. But it’s not just me fleeing the scene, now it would be her. So I explain that that’s not what we do, that that would leave someone just like us else to deal with the problem we created, and we instead decipher the various bumper stickers to figure out whose car it is. And despite her embarrassment, I bring her along as I track down the right dad and admit my teeny-tiny transgression (although I leave her home when later, I deliver a not-so teeny-tiny check to pay for the damages).
And when my 7th-grade son, who is battling a challenging HS-level Algebra course, voices the lament of generations before him: “WHY do I have to show my work? I KNOW how to do the problem!” Instead of saying, “I know, right! That drove me crazy, too!” I patiently explain how this is how the teacher knows he understands the concepts, and makes sure he’s ready to move on, blah blah blah. (I also play along with the pretext that learning cursive is good for him, too!)
Sometimes, I wonder if THAT’S the species-survival point of having and raising kids. I know there are plenty of childless folks who are upstanding  citizens, and unfortunately, too many parents who don’t bother to try to be someone to be lived up too, but for an awful lot of us, seeing ourselves through our kids’ eyes is all that allows us to patiently wait our turn at a 4-way stop or leave the last cookie for someone else.
As a favor – because, after all, it’s the kind of things a really GOOD person would do – if you don’t have kids of your own to sit in judgment of you, I can let you borrow mine if you want to work on some character development for yourself.
(Oh, and don’t worry, if you come over to my house to get them, and I offer you some food, I promise I will serve you from the special plates the dog NEVER licks clean!) 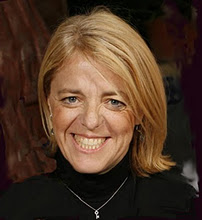 I’m a mom in Tulsa, OK, striving to be someone my kids can be proud of without losing my sense of humor.
Read more from Anna on her blog, From Little Acorns.
Categories: Guest Blog