One pair of socks. One book each and one flashlight,” I directed the kids. “Go, go, go.”

They shuffled off, arriving back in front of me momentarily with the prescribed items, which I in turn sorted into their individual backpacks. I confirmed that everyone had packed their toothbrushes, but because I know my family well, I slid an extra fiver of dollar-store toothbrushes into the mix.

After a quick final check, I chunked each backpack unceremoniously into the massive black contractor bag on my floor, already half-full of pillows and sleeping bags and shoes.

“Shouldn’t we use luggage?” Lucy asked.

“Luggage is for airplane trips and fancy people who don’t sneak candy into the movies in big purses,” I explained.

“But purse snacks are the best,” Arthur interjected wistfully.

I fielded questions as I dumped item after item into the Official Family Trash Bag. Where would we sleep? On our gear on the floor. Would there be snacks? Yes. Would we see animals? Definitely. Where were we going again?

“For the third time, husband, we’re going to sleep over at the zoo.”

Year of the Rat

We pulled into the parking lot exactly on time, no small feat for this group. We were ushered into the auditorium and directed to place our things along a wall. After dragging our bulging twin contractor bags into an outlet-adjacent position, the kids took a minute to exchange salutations with some neighboring children before it was time to get started. 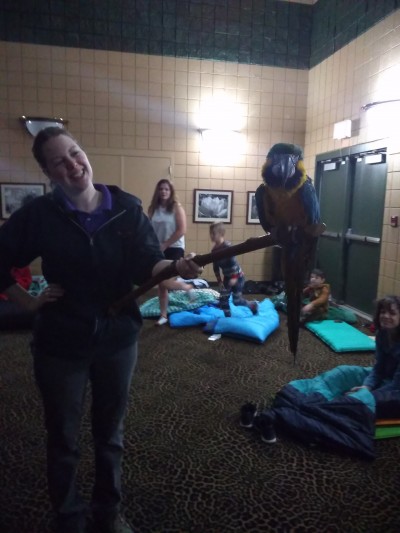 Arthur was pretty jazzed when he recently declared to me that this was his year on the Chinese Zodiac, so he was predictably stoked to hear the sleepover theme was the Chinese New Year. The evening kicked off with an introduction to the story of the 12 zodiac animals while the kids colored sheets with their individual animals. A quick scan of the tables for rabbits, rats, and boars told me a few kids of the 14 or so kids at the event were about Lucy’s, Arthur’s, and Noah’s ages. 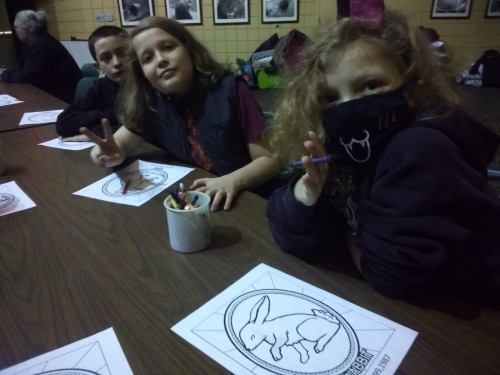 Next, our zoo hosts passed tablets around for an activity where the kids worked together to come up with a list of items describing each zodiac animal in turn. As they submitted each adjective, it appeared on the projector screen in a piece of ever-expanding word art describing the animals, which was peppered with clever puns and emojis from the older tweens of the group. With the words on display, our hosts described the traits of each critter according to the Chinese zodiac and then asked the kids to compare them. 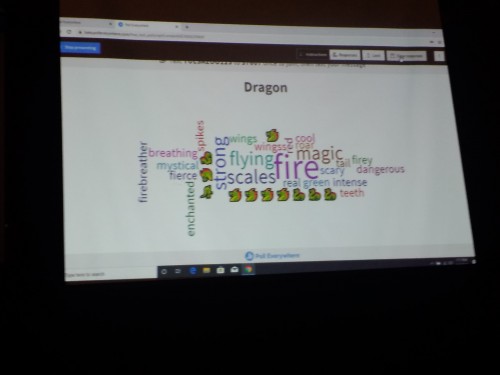 Soon, it was time for our first animal encounter with a sweet little rat friend. After a quick convo about respect for our animal friends and each other, the kids filed into queue and took turns petting her with the help from a docent. The animal encounters over the course of the sleepover were one of the best parts. Besides their rat friend, the kids had the chance to interact up close and personal with a few Chinese zodiac friends: a shy ball python, a sunshine-yellow bearded dragon, a cantankerous parrot moonlighting as an alarm clock, and an energetic Guinea hog named Hamilton. 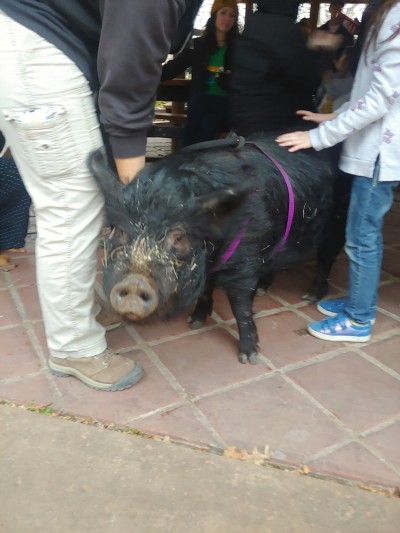 After our introduction to the zodiac critters, we traveled down the hallway to the education center, where interactive activity stations were set up for each of the zodiac friends. The kids split off with their families and worked their way through each station in shifts. At one, we tried to engineer our own humane rat traps using a variety of materials given to us. At another, we played a lilypad game where we traveled across the river with our pack. 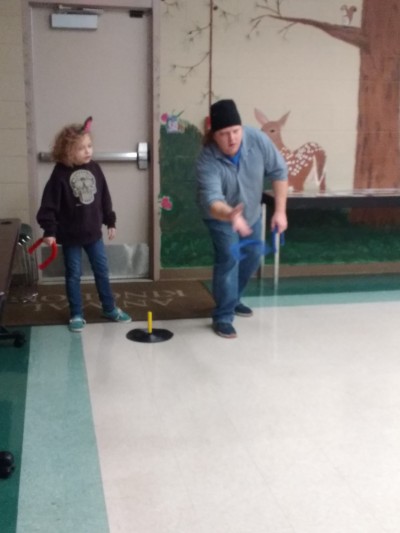 There was plenty of dragon drawing, snake camo hide-and-seek, and raft-building to keep the kids engaged and bring the family together with nary a black mirror in sight. At each station, we were learning animal facts together while engaging in high-quality family time that’s rare in the daily grind of afterschool activities and homework. 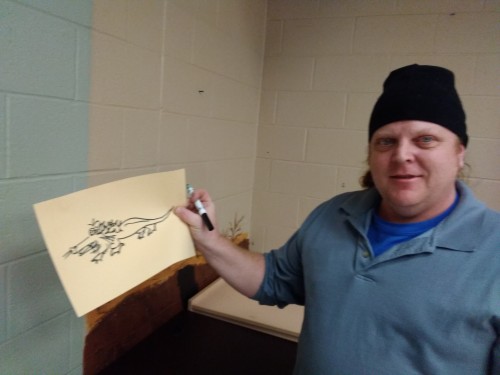 Of course, no good camp would be complete without arts and crafts. To keep up the Chinese New Year theme, we made paper lanterns and lit them with glow sticks, which we would need shortly. 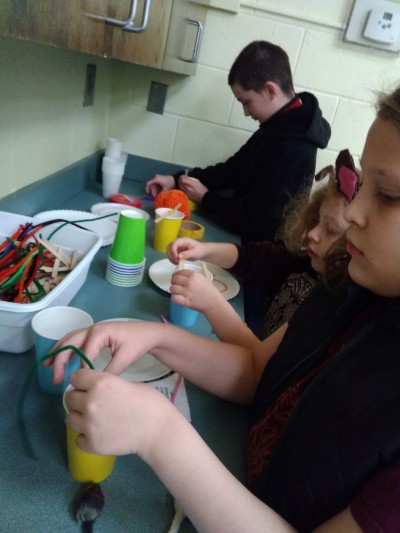 The next leg of the adventure was our family’s favorite: walking through the zoo after dark. The red panda is one of my favorite animals in theory, but I’ve never actually managed to really get a good look at him because he’s nocturnal, so he’s usually passed out like a college student after midterms. But that dude was up and ready to party when we passed by. It was super dark, but our zoo hosts brought red flashlights that would not disturb the animals. 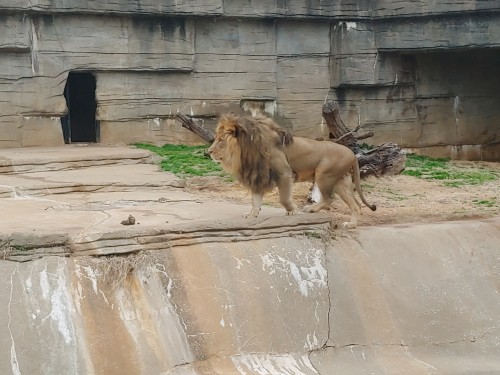 Perhaps a blessing of the Rat, two turns of good fortune bestowed on us an especially enchanted walk. First, it was a cool night but not a bitterly cold one or especially windy one. But the weekend also fell on the Snow Supermoon—the first full moon in February when the moon is closer to Earth—bathing the zoo grounds in a dreamlike silvery light. There’s nothing quite like the sounds of children whispering giggles in the light of a magic moon, glowstick lanterns bobbing and dancing along an empty zooscape.

After firing up some Smoreos in a couple of fire pits, we shuffled our sticky-faced children in to get ready for bed. Imagining my trio, who often stay up past midnight on the weekend, would have a hard time falling asleep in a roomful of people at ten at night, I told them they could each bring a book and a flashlight and read under their blankets the way their dad and I did when we were kids. But they fell asleep almost immediately even as a few other kids were still going a bit sleepover crazy. 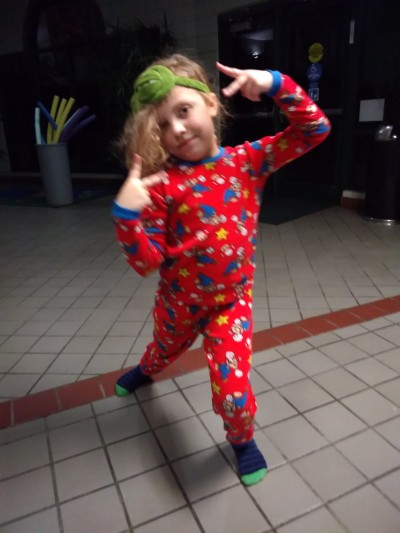 Sleeping on an air mattress in a roomful of sleepover campers brought back a flood of memories from every overnight camp I ever attended as a kid.

The next morning, the kids had the sweetest wake-up call. One of our zoo hosts brought a parrot friend around and gently called from the foot of everyone’s sleeping roll in turn to come and meet a new pal. Before long, the kids were all talking over each other giddily and ready for more animal adventures.

We packed up our things and ate breakfast. There was plenty of coffee for those of you who may be concerned about such matters. Breakfast offerings included a range of cereals, muffins, and convenience store-type pastries served with orange juice.

The final event was an early morning hike through all of the zoo pavilions. The zoo opens at 9, so once again, it was like having the zoo all to ourselves, an experience that my husband remarked he had never had in his lifetime of going there. 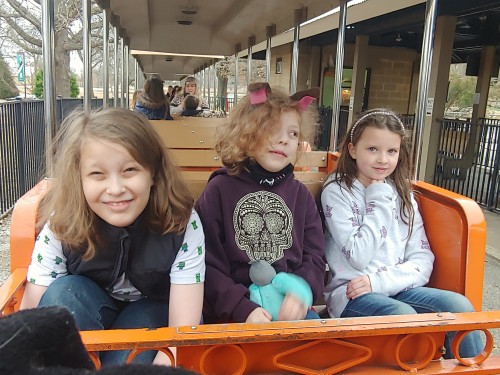 For one final bit of fun, we all piled onto the zoo train and rode it back to the entrance. The sleepover includes admission to the zoo for the afternoon as well, but we were a bit tuckered out after all of the zoo excitement.

All in all, the zoo sleepover was an incredibly fun and importantly unplugged adventure for our whole family to enjoy together. These overnight family adventures, AKA Snooz-a-pa-ZOO-za events, are open to families with kids ages 6 to 17. You can learn more about upcoming events by contacting education@tulsazoo.org.

Although the Chinese New Year sleepover was great for little ones through tweens, some of the Tulsa Zoo’s Learning from Nocturnal Adventures or LUNA Group sleepovers are tailored for different age groups if you’ve got a scout troop or other group of kids you’d like to schedule. This could also be a fantastic event to schedule for a birthday group or family reunion with a lot of kids. There are also evening programs available.

I strongly recommend packing a good pair of earplugs, a sleep mask, and an inflatable air mattress if you’re middle-aged parents like we are. But I guarantee sleeping in the zoo with your kids is one of the most magical experiences you’ll ever have, and I know Team Nebula will remember this one for the rest of their lives.

Thanks so much to Tulsa Zoo for sharing this fantastic adventure. To learn more, visit the Tulsa Zoo online or contact (918) 669-6600.

Do you have any questions for me about our zoo adventure? Hit me up in the comments. Thanks for reading, and have a beautiful, zoo-tiful week! 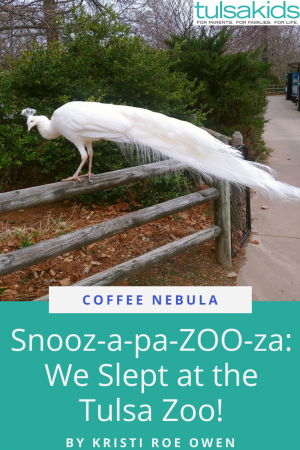