If you are a parent of more than one child, you have almost certainly witnessed the phenomenon referred to as “sibling rivalry.” It often begins soon after the birth of the second child. It can be hugely disappointing to parents who were picturing a close and loving relationship between brothers and sisters. Parents may actually experience a sense of loss as they begin to realize that what they were envisioning is not going to be the reality.

The perpetual bickering, jealousy and competition can be exhausting to parents. It often produces a lot of disharmony within the family and can be exasperating. It’s important to understand that this doesn’t mean you are doing something wrong as a parent, and it doesn’t mean something is wrong with your children. Sibling rivalry is common. It may last throughout childhood, and it can even extend into adulthood.

Sibling rivalry can take many forms. Some of the most common include tattling, hitting, poking, lying, throwing things, blaming and name-calling. There are many additional ways that siblings strategically plan to antagonize one another.

There are a number of things that can lead to sibling rivalry. The older child has been accustomed to receiving all of the attention from his parents. His world changes abruptly when his baby brother or sister is born. Newborns require almost constant attention from parents. This can lead to resentment by the older child as he necessarily receives less attention than before. I remember my older son being so excited about the arrival of his baby brother. It didn’t take very long for the excitement to fade away as the reality set in. He was now going to share my attention, and he didn’t like it.

Parents may notice that sibling rivalry intensifies during periods of transition. The birth of another child, one child beginning school, divorce, and even a new marriage may increase struggles between siblings.

Children who live in a small home and have to share a room may have more issues due to their close proximity.

These stressors can lead to increased rivalry. Parental stress can mean less time and attention to devote to the children. When children are stressed, their fuses are short and they lose their tempers more easily.

Parents must realize that they will not extinguish sibling rivalry. The goal must be to reduce it. There are some things parents can do to help minimize sibling rivalry. Because these rivalries often stem from seeking parental attention, parents should try to spend some quality time with each child every day.

Children often seem to start fighting and bickering when they are tired, hungry or bored. Parents may wish to pay attention to these factors in order to determine how they are affecting their families. Minimizing the contributing factors can lead to more family harmony.

Parents need to be careful to avoid the appearance of playing favorites. Comparisons should be avoided. Refrain from making statements like, “I don’t know why you can’t make good grades like your brother.”

Encourage your children to engage in cooperative play rather than competitive play. Some video games allow for cooperation. Some board games and card games require teamwork. It may be helpful to have the children work together as a team instead of being opponents.

Children are individuals, and they have their own unique strengths and talents. Let each one know that she’s valued and appreciated for her uniqueness.

You may be surprised to learn that there are some potential benefits to sibling rivalry. Children learn to be assertive and stand up for themselves. They also learn how to resolve disagreements and manage conflict. Children eventually learn the skills necessary to compromise and negotiate.

Sibling rivalry is very common. It doesn’t mean that there is something wrong with your parenting skills. It doesn’t mean that anything is wrong with your children. It’s also perfectly natural for parents to experience a sense of loss when they realize that sibling rivalry interferes with the vision they had for their family. You will not be able to eradicate the rivalry in your family, but there are things you can do to mitigate it. Although it’s frustrating for parents, remember that there are actually some benefits to this experience.

A couple of my favorite resources which address sibling rivalry are, “I Love You the Purplest,” by Barbara Joose and “Siblings Without Rivalry: How to Help Your Children Live Together So You Can Live Too,” by Adele Faber and Elaine Mazlish. The first is a terrific choice to read with your children.

Don’t give up all hope. Not all stories of sibling rivalry have unhappy endings. Many siblings develop very strong ties. My brother is one of my closest friends, and he has been so for many years. 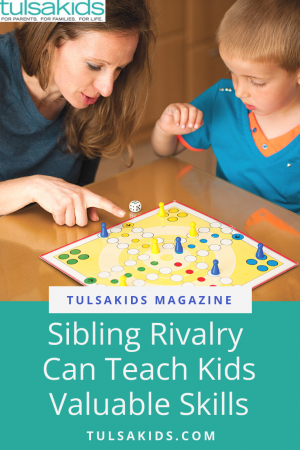