TulsaKids Magazine is partnering with Tulsa Global Gardens and other organizations to invite Tulsans to engage in a community-wide effort to gather around the table. Whether your goal is to eat more healthy foods, to cook more, or to sit down at the table and make time for conversation with family and friends, we’re going to give you ways to pursue those changes.

TulsaKids has invited two families to make over their dinnertime by committing to sit down and eat together at least four times a week. Research shows that families who dine together are less likely to have children who participate in risky behaviors such as drug and alcohol abuse. We’ll follow the families through blogging and social media during November, and then follow up with them in December.

In our November issue, we’ll have a feature that will give you tips, recipes and advice from the experts on how to make your dinnertime into a healthy, meaningful habit that the entire family will look forward to. If you have specific questions for our experts, email me at editor@tulsakids.com  — Betty 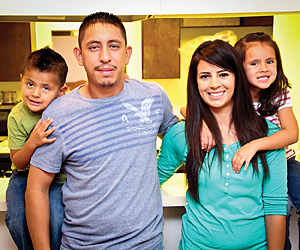 Obstacles: Eating Together, But Not Communicating; Meal Planning

Vanesa says her family’s current habits are eating together every day for dinner. While she does cook every day except Saturday and Sunday, she says her children can be picky, but she and Marco expect them to eat whatever is being served.

Vanesa’s biggest obstacle at dinnertime is deciding what to prepare. She doesn’t want to make the same thing every week. Another, more recent, obstacle is that Marco has been working later, so she cooks dinner at the regular time, lets the kids eat while she sits down with them. When Marco comes home, the two of them eat together.

Vanesa says that she would like to change the way her family interacts at the table. Rather than communicating with one another, she and Marco are on their cell phones. Vanesa says they would like to talk to their kids more about their day and have more interaction. She would also like to put together a menu for the week rather than having to pull something together at the last minute. 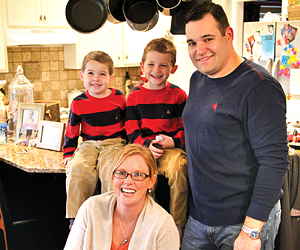 Obstacles: Not Eating Together; Too Much Kid Food; Meal Planning

For Maura, a busy working mom, and Collin, a dad who travels several days a week, a proper family dinner only happens a couple of times a week. “Many days it’s just an exhausted mom and two wild boys running through the back door ready to chow down!”

Maura admits to many evenings of turning on the TV to pacify the boys while she “hunts through the fridge for something that isn’t expired.” Maura says she frequently gives in to “the incessant begging for cheese pizza Lunchables or Kid Cuisine frozen meals.” Cooked meals for the family are typical kid food such as turkey dogs, mac-n-cheese, spaghetti and peanut butter and jelly.

Complicating mealtime is Aidan’s food allergies and the fact that he is a very picky eater. “The kid has been known to flush food he doesn’t like or feed it to Hattie [the dog], then proudly announce that he’s consumed it and ask for a cookie!” Maura finds herself making two or three different dinners. Or kids will be eating on the couch while mom sorts through the mail in between bites at the kitchen counter.

Despite the difficulties, Maura does insist on a couple of dinners together a week, but fighting often erupts at the table. Their most interactive and easy times are eating at a restaurant where they can focus on each other.

Maura admits that her biggest obstacle to family mealtime is making excuses. “We’re tired, lazy, hungry and who has time to map out meals!?” She says it’s easier to go through a drive-thru, grab a pizza or eat in the car on the way to flag football practice than to sit down together. She says she’s like so many other families she knows, but not at all like the family she grew up in. “Mom made it look so easy.” Even now, Maura says her mom sometimes brings over a Tupperware container full of whatever she made for dinner.

Maura’s goals for Set the Table, Tulsa are to “change everything.” She says she wants to provide well-balanced meals that the entire family can enjoy and to make the most of family time when Collin is home. She would like to eat together as a family five times per week. Maura’s personal goal is to plan and shop for dinners ahead of time and stick to the plan. “If I could learn how to defuse occasional uprisings at the table, that would be cool, too.”