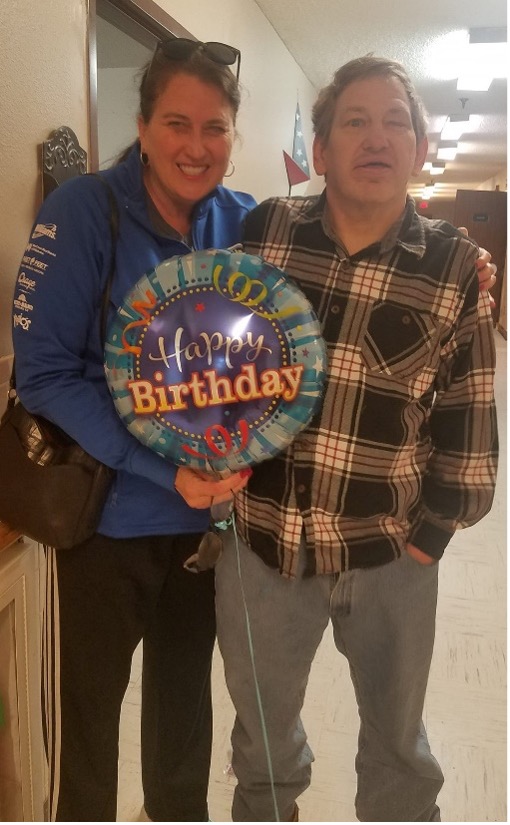 My baby brother turned sixty this week. I know that’s not earth-shattering news to the world, but it’s a special milestone birthday that means a lot to him and me. Unlike most people, my brother loves getting older. David doesn’t moan about his advancing age and long for his lost youth but eagerly anticipates every birthday. He especially enjoys the big ones that begin a new decade.

David has intellectual disabilities and lives in a home about an hour away from me. We talk on the phone every night, I visit frequently, and he comes to spend a weekend with me every few months. Three hundred and forty-three days a year, we talk about Christmas. Then we have a twenty-two-day reprieve between Christmas and his birthday when we talk about his birthday. My brother primarily communicates in one-word statements that might be difficult for a stranger to understand. Knowing what he likes to talk about helps me understand his language. I know that 75% of the time, he talks about food, and the other 25% is divided between cowboy hats (mentioned at least once a day), cowboy boots, money, and occasionally a random word that forces me into detective mode. Never does a conversation go by without us both saying, “I love you,” and on days he’s feeling really affectionate, he might string together an entire “I love you, honeybunch!” Earning a four-word sentence from him is rare but treasured!

For me, there’s a certain bittersweet feeling about his birthday. The gap between his mental abilities and his age widens as the years go by. In so many ways, he is forever a child. He loves stuffed animals, Smokey Bear, and Sesame Street. When he spends the night with me, he snuggles into bed, eager for me to read all his old favorite Dr. Seuss books until his eyes grow heavy with sleep. Yet, he’s also a grown man who wants to dance with the pretty women at the annual prom for people with intellectual disabilities. He often begs me to buy him a cigar and likes the thought of drinking a cold beer (thank goodness for non-alcohol beer that won’t interfere with his medications)! This week there was an instant that I glanced at him, and he looked old, on the cusp of what we think of as elderly. I hated that glimpse into the future.

The last few years have aged him. He survived COVID twice thanks to the excellent nursing care at his home. But he seems old now in a way he didn’t before. The years catch up with all of us, but somehow it doesn’t seem right that my brother should have gray, thinning hair and wrinkles. I try to live in the moment and not borrow worry from the future, but it’s painful to watch David show signs of aging.

Did you know that people with intellectual disabilities develop dementia earlier than the general population? That’s a sad fact that I wish I didn’t have to know. When I saw my brother appearing to be forgetful recently, I did a little research. I discovered that in people with intellectual disabilities, the onset of dementia is approximately ten years earlier than in the general population. I know that no one promised life would be fair, but this seems like an unduly harsh sentence for people who already have had more than their share of challenges. I want to speak to the manager about this injustice.

I would never claim to know what it is to be a parent to a person with disabilities, but as time passes, I think I understand my mother better. She worried about her son. She was an outspoken advocate for his well-being and would have fought a bear (and won!) to protect her son. Although I’m his sister, not his mother, my role has begun to blur in the decade since my mother died. I find myself echoing some of the emotions I heard her express but didn’t fully understand at the time.

Like many parents of people with intellectual disabilities, my mother dreaded leaving David behind when she died. As I age, I begin to think about the same issue. David is in a safe home and well taken care of, but if I die first, who will he talk to about Christmas and cowboy hats every night? Will somebody else know that when he says he wants Ulysses S. Grant, it means he wants a fifty-dollar bill? Maybe it’s egotistical to think I’m that important, but since I became his guardian twelve years ago, we’ve bonded and formed our rituals that bring us both comfort. He’s my brother, but somehow he is also my child. The role may be blurred, but our love is certain and strong. I hope we have many more birthdays to celebrate together, complete with cupcakes and cowboy hats!

My Brother, My Child

He is my brother
He is my child
Years of hard living deeply etch his face
Wisps of gray hair stubbornly fight a losing battle
Crippling scoliosis bends his back in an unnatural curve
He shoves the pain aside to ride his beloved bike
Ice cream melts away memories of cruel taunts
He loves Sesame Street
He begs to smoke cigars
He snuggles his stuffed teddy bear
He longs to ride a motorcycle
He has so much he wants to say
His words come out garbled and indecipherable
Strangers see a scary man who isn’t quite right
I see a human struggling to fit into a complicated world
He is sixty. He is six
He is a man. He is a boy
He is my brother
He is my child 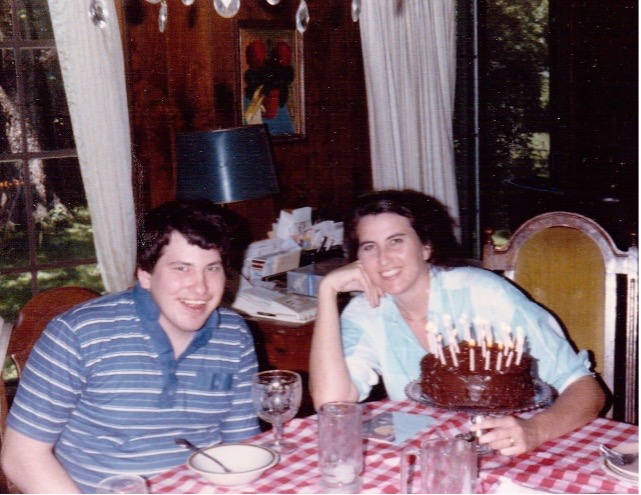 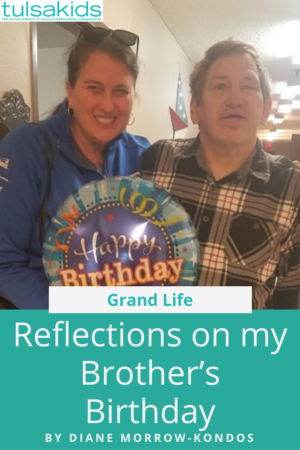