With an emphasis on water safety

My kids could not have been happier as they splashed in the water, playing with their friends.

I felt like I was going to throw up.

I’d dropped them off at their first day of summer camp that morning, thrilled to have four hours to myself. When I’d enrolled them in the camp run by the gym where I work out and teach group fitness, I asked about the ratio of adults to kids in the pool. They told me it would be two adults with a maximum of 15 kids, plus a lifeguard.

“Isn’t that kind of a low ratio?” I’d asked. The camp was for kids ages two-and-a-half and up. The pool has an infinity edge that gradually extends to a depth of three feet. The camp director, a mom herself, assured me they’d always done it this way and it had been fine. She encouraged me to sit by the pool and watch if I wanted. Perhaps I was being overly protective, I thought. Obviously, the other parents didn’t seem to have a problem with it.

My kids are three and five years old, and neither of them can swim well. Though I pride myself on being a pretty hands-off (read: lazy) parent, when it comes to water safety, I don’t take chances. On the first day of camp, I sat poolside and watched during swim time. My initial feeling of, “I can’t see how this is going to work” progressed to, “Oh my god, this is a total disaster” to, “I don’t know how much longer I can watch before I start hyperventilating.”

There were 13 campers, many of them under 5 years old, two adults, and zero lifeguards. Plus there were kids with their parents who were not attending camp swimming. I could hardly keep my eyes on my own two kids through the sea of people. At times, one camp staffer would take a kid to the restroom, leaving one adult in charge of 12 kids.

I waited for them to blow a whistle and have the kids buddy up like we used to do at summer camp when I was a kid. That never happened. I waited, my eyes darting wildly to keep track of my girls until finally, they took the kids out of the water. At that point, I gathered my things, went to the locker room, sequestered myself in a bathroom stall and exhaled. Tears of frustration and anxiety spilled out while I choked back a little sob.

Was I overreacting? I didn’t think so. But when I brought my concerns to one of the administrators of the gym, they were brushed off. I was offered only reassurance that the staff was extremely responsible. “I’m sure they are,” I countered. “I just don’t think there are enough of them for all of the kids to be safe in the pool.”

Does the camp have state licensure?

While the ACA accreditation is a valuable credential, it is no replacement for doing your homework. According to Becca Mack, the executive director of camping at Colorado’s Boulder Valley YMCA, ensuring that your child’s camp follows state licensing guidelines and provides adequate staff training is just as important as the ACA stamp of approval, if not more so. Whether or not they’re accredited by the ACA, camps must meet certain minimum standards set by their state.

There are a few states that have adopted the same standards as the ACA. An index of resources for each state compiled by the ACA is available at https://www.acacamps.org/resource-library/state-laws-regulations. While some states’ websites are very transparent about their staffing ratios, including specific requirements for aquatics (Maine is a great example), others, like my home state of Colorado, are clear as mud.

In Oklahoma, Oklahoma Admininstrative Code 340:110-275, says that camps and childcare facilities must adhere to specific ratios dependent on the children’s age. In mixed age groups, facilities are to honor the guidelines for the youngest child in the group. Three-year-olds should have 1:6 supervision, 4- and 5-year-olds should have 1:7 supervision, and children age 6 and older should have 1:10 supervision. These regulations do not apply when children are in a swimming lesson with a certified instructor. Additionally, the law states parents must grant permission for school-age children to participate in swimming, and children must be supervised at all times. Additionally, there must be a lifeguard and a staff member who are trained in CPR/first aid present.

Is the staff well-trained?

Mack recommends parents talk directly to camp administrators to find out how they train their staff to manage swim time and make sure they know and adhere to their state’s licensing standards.

Sarah Kinnison Clavin with Miller Swim School in Tulsa and Jenks, which has been teaching swim lessons and promoting water safety for over 40 years, says that Red Cross Lifeguard regulations recommend a 25:1 lifeguard to swimmer ratio.

“However,” Clavin says, “25 novice or beginner swimmers can be quite overwhelming. As a parent myself, I would feel much more comfortable with a lower ratio, knowing that even an experienced swimmer is not exempt from a water accident. For water safety experts, the general rule of thumb is the more eyes on swimmers in the water, the better.”

What are the camp’s swim safety policies?

While the ACA standards dictate that camps must institute a system to quickly account for all campers involved in aquatic activities, it is at the camp’s discretion to decide which system to employ. While there is an app for nearly everything, they still haven’t come up with one to replace the Buddy System, a common water safety check that has not changed much, if at all, since my youth, whereby the lifeguard blows a whistle signaling campers to pair up with a pre-designated swim buddy.

There are other safety measures that parents should consider regarding water safety.

Clavin recommends that parents not only ensure that their children have a solid foundation in swimming and water safety skills, but should be aware of where the children will be swimming – a pond or lake is much different from a pool.

“For camps, there should be no distractions,” Clavin says. “Water Watchers should be pre-designated and have eyes on the water only – not be distracted by other counselors, phones or activities.”

Clavin would also look for camps that separate the experienced swimmers from the novice swimmers, and that they allow for separate swim times, which makes it easier for lifeguards to know what type of accident they may be seeing.

“Obviously,” Clavin says, “creeks and lakes should be checked for exposed branches, tree limbs, rocks and other hazardous materials. Since these waters are darker, a limb hidden under the water’s surface can pose deadly dangers.”

Beyond my casual questions about the swimming situation at my kids’ camp, it never occurred to me to explore my state’s licensing requirements or other water safety concerns until I witnessed the swim program firsthand. I admit, my main camp selection criteria were convenience and price. After my poolside near-panic attack, though, my concern was safety.

And rightly so, according to experts like Dr. Sanjay Gupta, senior medical correspondent at CNN Health. In an article posted there, he says toddlers are at a relatively huge risk of drowning, even in water as shallow as one inch, due to their top-heavy bodies: “Children 4 and under actually have the single highest drowning death rate according to the National Safety Council.” And according to Alan Steinman, MD, former director of health and safety at the U.S Coast Guard, drowning is a highly inconspicuous event. It happens quietly, without any arm flailing or cries for help.

Though I hated to break my kids’ little hearts, I felt I had no choice but to pull them out of camp. And next time I have to make a choice about camp, I know what questions I’ll ask ahead of time. 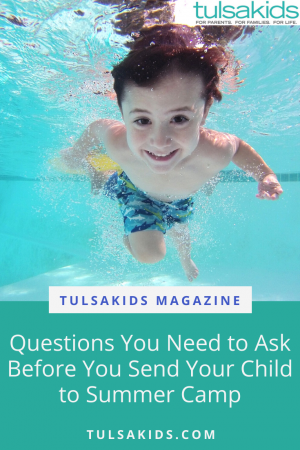