My daughter is the pregnant one, so why am I the one all emotional and teary? Ever since I found out my daughter is expecting another baby, I’ve been feeling tender and overly sensitive. The truth is, I’m always a bit of an emotional sap: I cry during the SPCA commercials, I mourn the deaths of strangers, I get overwhelmed with joy when all my kids come for Sunday dinner. Yeah, I’m not ever an example of emotional fortitude, but in the last six weeks since she announced her pregnancy, I’ve been precariously carrying around a basket full of overflowing feelings and occasionally spilling them all over anyone in range.

Thinking about adding another person to our family has me thinking about the cycle of life: the generations before and the generations to come. It has me reminiscing about my own childhood and my relationship with my grandparents, and then my children’s lives and their connection to my parents. In the blink of an eye, I’m the older generation. Although I love being a grandmother, there are times I have almost a mental whiplash. I went from being a child, to a mother, to a grandmother faster than a Ferrari on the Autobahn. I love this stage, but I want it to slow down. 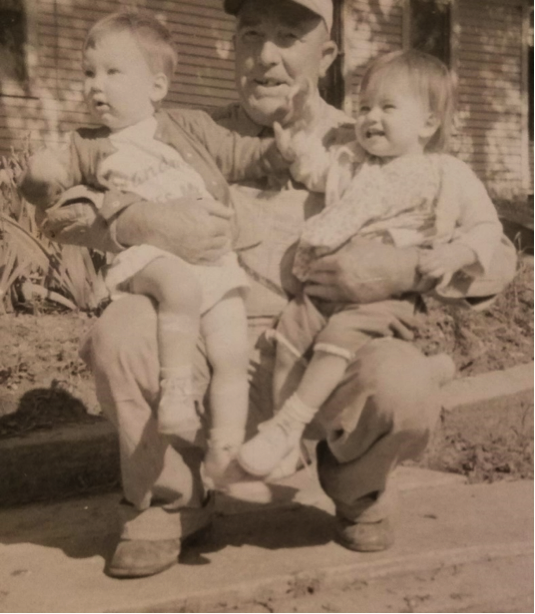 Wasn’t it just yesterday I was a toddler on my grandfather’s knee?

I decided to torture myself by watching Nichole Nordman’s video, Slow Down. If you enjoy a good cry, watch this video. I’d seen it several times when it first came out, but decided I needed to watch it again since it had been approximately an hour since I’d cried. By my internal watch, I was long overdue for more tears, and they came freely as I watched the video. I thought about the lightning speed of my own kids’ childhoods, how fast my grandson is changing and soon, a new grandbaby will be in our arms. After I cried, I felt compelled to send the link to my daughter so maybe she could join my in my emotional indulgence. Ever the practical woman, she immediately texted back, “Why mom, why would I want to watch this?!” 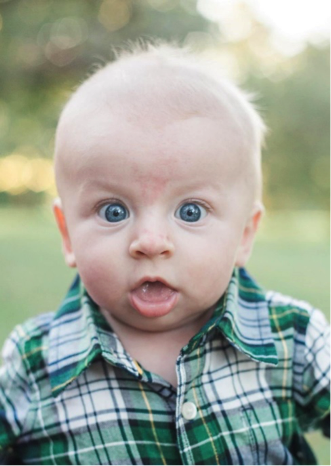 Callister at four months. Was he really ever this little and this bald?

Could I be experiencing vicarious pregnancy hormones? My daughter has always been a rock. She’s calm, logical, and rational. I have no idea where she attained those admirable qualities, but it’s obviously not a genetic thing. Watching her as a mother to my grandson has been a pleasure. I’ve seen her become more sentimental and softer, but still a strong woman in control. Maybe I feel the need to make up for her calm by being overly emotional, but according to my daughters, I’ve always been a little “extra” when it comes to sentimentality.

I’m not the only one who is feeling out of sorts because of my daughter’s pregnancy. Her five-year-old Australian Shepherd is feeling discombobulated also. He’s always been a nervous boy, afraid to go down stairs and in constant need of affection and reassurance. He is the definition of a “momma’s boy,” snuggling up to my daughter every chance he can get. Since she became pregnant, he has been feeling extra needy and nervous, hovering around her and monitoring her every movement. Poor guy, it’s going to be a long pregnancy for him, and then he’ll transfer his worries to taking care of the new baby. 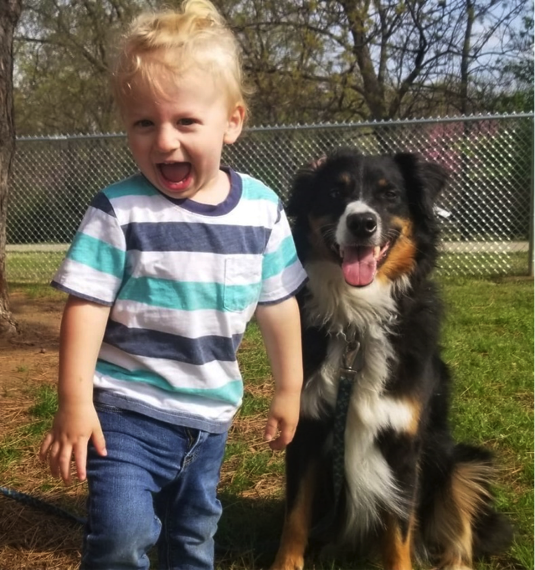 The dog takes his responsibilities seriously, maybe too seriously?

Like her overprotective dog, it looks like it might be a long five more months of pregnancy for me. I eagerly await news from each of her doctor’s appointments and follow along the pregnancy through the Bump application on my phone. I can’t wait to find out the sex so I can begin buying “necessities” (cough, cough). I may be a little too excited about adding a new bundle of love, but this is most likely going to be the last grandchild, so I want to celebrate every step of the way while maintaining appropriate boundaries (I’m trying, I promise!). I do know, despite my sympathy pregnancy hormones, it’s their baby, not mine. Now, could someone please run to the store and get me some rocky road ice cream and a jar of pickles?

Thirty-two years ago, the week before I have birth to my oldest. My pregnancy hormones mostly manifested in nausea. 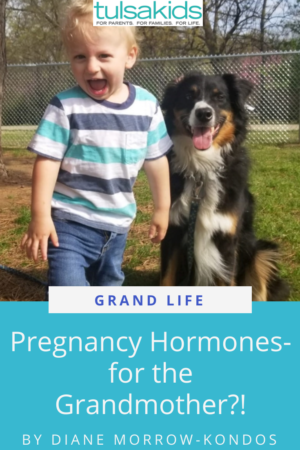