It’s something Whitney Downie has heard many times over the years in the parenting classes she teaches.

“My parents spanked me, and I turned out OK.”

Her answer to that: But it was unnecessary. A better approach: Parenting with love and kindness, committing to consistency and parenting with intention.

It’s understandable how parents fall into bad parenting ruts. We do what we know, we slide into some of the poor patterns of our own parents, and we take the easy way out.

Sometimes that means yelling, using sarcasm or threatening a spanking.

When you’re running late for a dentist appointment and can’t get your crying 5-year-old to put on his shoes after an epic meltdown, you may find yourself yelling. And you might regret it later, knowing there was a better way to handle it.

The ideas of positive discipline and parenting with kindness aren’t new, but they are becoming increasingly important to a new generation of parents.

Downie, chief program officer at Family and Children’s Services, has had many discussions with parents about how to parent with consistency and intention.

She says parents need to fill their toolbox with new tools. Those new tools may include taking a parenting class, reading a parenting book or joining a group. It also includes using natural consequences.

It’s something Downie – and many other parents – were doing before it had become a parenting buzzword.

Downie remembers when her now grown son was 2 and wouldn’t get dressed in the morning. She had to get to work and get him to daycare. So what did she do?

“I stayed out of power struggles,” she said. “I decided I can’t be managed by a 2-year-old.”

She gave her son the natural consequence, buckling him in his car seat without his clothes on. By the time he got to daycare, he was cold and was ready to get dressed.

No yelling. No spanking. Maybe some inner frustration. But he was none the wiser.

This didn’t happen just once, but many times. And while it may feel counterintuitive to not raise your voice or tell your child he’s bad, letting the natural consequence work for you is often a way to let children discover for themselves and to deepen the trust they have for you.

Downie knows there are situations when stress is high, particularly in families with a high degree of conflict. But even then, she says, it’s important to be consistent and to never hit.

“That’s just a big person hurting a little person. This is one of those things I’m black and white about,” she said.

As a new generation of parents examine how they were raised and what might be best for their families, the authoritarian style of parenting may not be as strong as in the past.

A recent study from the National Institutes of Health showed that 6 out of 10 U.S. children develop secure attachments to their parents. Harsh parenting styles may contribute to the lack of a bond between parents and children in the other 4 out of 10 kids. Parents who cause additional distress to their children are less likely to have a secure attachment, the study said.

This strong attachment is important for coping with life’s challenges, including poverty, family instability and everyday stress.

Downie cites an acknowledgement of past parenting wrongs as one reason for a shift in perspective on how children should be raised.

The more society talks about issues that were once not talked about – child abuse, domestic violence, suicide, mental health – the more open the discussion can be.

“In the last 10 to 15 years, we’re talking about the trauma and crisis that’s happening in our families and our communities,” she said.

It’s important to remember the age of the child being disciplined.

Downie says parents often think kids understand more than they do. For instance, a young child who touches a hot oven isn’t doing so out of disobedience, but out of curiosity. So rather than yell at or hit the child who touches the stove, show the child how dangerous it can be and how it could burn, talking about what that might mean.

“Kids are curious about their environment. It’s their developmental job,” Downie said.

Choosing when to discipline also comes down to picking your battles. Is a clean bedroom important to you? If so, set boundaries about what that means, whether it’s making the bed each day or taking cups and trash out of the room each night. If it’s something that’s not hurting them and you don’t care about, let it go.

Parents who practiced attachment parenting with their babies and young children may find themselves in a new realm with teens.

It’s something discussed on the site Conscious Parenting Revolution, where Katherine Winter-Sellery talks about the importance of maintaining the parent-child bond through love and respect, sensitivity, constant loving-care and positive discipline.

Talking openly with kids and teens – speaking with respect and care rather than cynicism and sarcasm – helps to secure that bond.

No parent is going to get it right 100 percent of the time. But striving toward parenting with love, kindness, positivity and consistency is worth the effort.

“You’re not going to be perfect. But you can apologize, and you can get help,” Downie said.

Here are some practical ways to incorporate positive parenting into your family life. 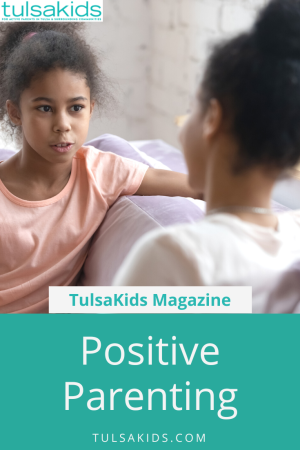