Favorite family films, plus activities and snacks to round out your Family Movie Night!

I‘ve been trying to introduce Joss to some Christmas classic this year. Movie nights are just what I need in 2020. So I thought it would be fun to think of some movie + activity pairings for some of our favorites, to help you plan your next Christmas movie night! Kristi Roe Owen already did this, pairing geeky holiday TV specials with required snacks. So definitely check her post out if you’re looking for some more options!

What’s your favorite Christmas movie? Let me know in the comments! 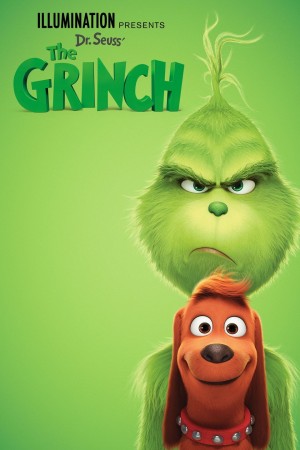 I already shared a tutorial for making your own “Give a Gift to Baby Grinch” game. Other Grinch-themed activities:

If you have some green face paint in a couple different shades, you can try doing your own Grinch look 😉

Another healthy option is the Grinch Kabobs I shared last year. We’ve made these several times since then!

And, since it’s a movie night, here’s a recipe for Grinch Popcorn. It’s so green, it almost glows! 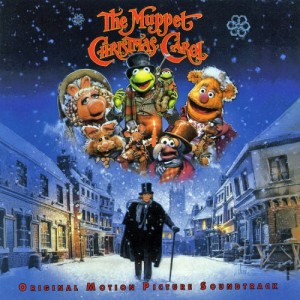 I watched a couple Muppets movies growing up, this being one of them. But I don’t feel like they were a significant part of my childhood. However, I’m part of a couple geeky Facebook groups, and the Muppets love over there made me want to revisit this movie with Joss. He got a kick out of it – we’ve watched it twice, and he’s been asking for a third viewing. The music is great. His favorite part is the narration by Gonzo (as Charles Dickens) and the rat. Their antics throughout the film had him rolling with laughter.

We followed this up with Mickey’s Christmas Carol. A much shorter version of the story, so might be better for younger kids. My favorite part of this one is Scrooge McDuck’s accent.

Here’s a cute tutorial for making your own felt Muppet Christmas Carol ornaments: https://www.tulsakids.com/christmas-crafts-and-other-festive-diys. And of course, another activity you could do together is read the original book!

As far as food, you could go all out of course with some roast goose! Reallifedinner.com also recommends some gold coins – of course! 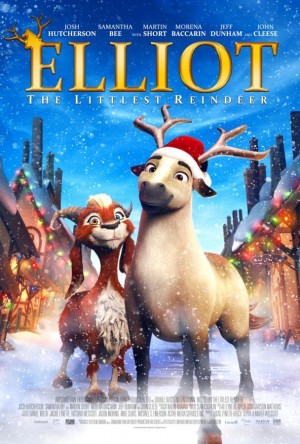 Joss’s study group friends brought this up one day, and although I’d seen it on Netflix, we’d never watched it. It’s the story of a miniature horse who dreams of being one of Santa’s reindeer. With the help of a goat, he attends the reindeer try-out games and uncovers a fiendish plot to get the reindeer out of Santa’s employ for good!

Since this one’s all about the reindeer, you could try making some reindeer crafts:

Food-wise, make some reindeer chow! The main antagonist’s name is Lemon Drop, so of course you could also serve up a side of sour candies. 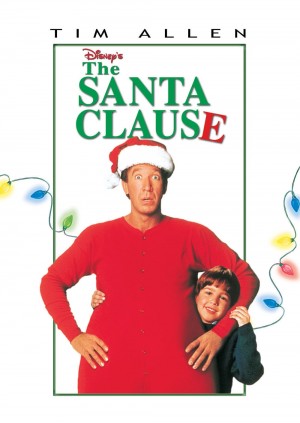 This one, I did watch quite a bit as a child. I had a big ol’ crush on Bernard the Elf for, too. And after our recent visit to see The Wienermobile at Gathering Place, where Joss received his very own weenie whistle, I figured it was time to introduce him to The Santa Clause.

The main food items that stick out to me from this movie is Judy’s recipe for hot cocoa and, of course, Denny’s. So whip up some breakfast-for-dinner and a pot of homemade hot cocoa! And you can’t forget about Santa’s favorite: milk and cookies!

As far as crafts and activities, you could write letters to Santa and research the history of Santa. And don’t forget to read “The Night Before Christmas”!

We love 2020 film Jingle Jangle! Joss calls it “Jolly Jangle.” If you haven’t seen it yet, it’s gorgeous and empowering. Just listen to “The Square Root of Possible.” Not only does Madalen Mills have a wonderful voice, her character Journey is a girl who finds inventing and calculating more fun than typical childhood socializing. In this song, she vows that “nothing’s going to slow me down…finally I see, it’s all possible. Watch me rise high above my obstacles. Watch me become who I’m supposed to be!”

For an activity, have your kids dream up and draw their own toy invention! Or have a family sing-along or lip-sync contest. The soundtrack is so good, you could listen to it on repeat just for fun.

Our friends over at MetroFamily in OKC shared the following meme recently – and you know, it’s true! 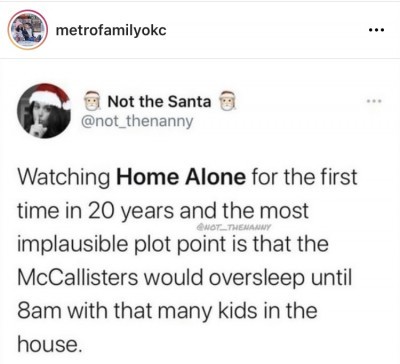 Joss loves the “making traps” aspect of this movie. If you’re into that sort of thing, you could make your own Rube Goldberg-style machine. Don’t hurt anyone, but that would definitely be in the spirit of the movie!

You could also have a McCauley Culkin “scream” photo contest. Who can do that classic hands-on-the-face look of terror the best?

For food, order some cheese pizza and set up a build-your-own sundae bar. 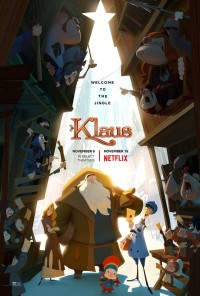 How have we not yet re-watched Klaus this year? It became an instant favorite last year.

Since it’s all about letters to Santa, this would be an excellent activity to do for a Klaus movie night. It’s also about feuding neighbors learning to be kind to each other – so a great opportunity to go do an act of kindness for someone in your neighborhood!

There is also a scene with a lot of  dead fish up for grabs, so…fish could be on the menu. However, the movie doesn’t make it look appetizing! Maybe some Swedish fish instead. 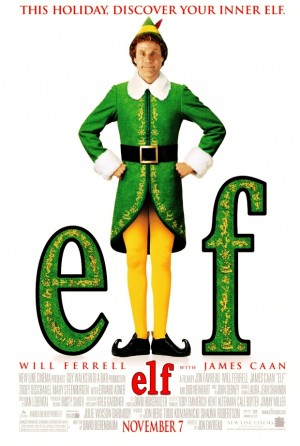 A list of family friendly Christmas movies wouldn’t be complete without Elf. As soon as I found it streaming, Joss and I watched it. I knew he’d love it, but it hadn’t been on Netflix or anything, so we hadn’t gotten around to it. He’s a big fan of buddy.

In preparation for an “Elf” movie night, you could always do some extreme Christmas decorating!

Here are some other craft ideas

And for food…spaghetti and syrup, anyone? Or maybe just stick to stacks of pancakes and a pancake bar.

Obviously, this isn’t a comprehensive list of films that would be perfect for Christmas movie night. These are mostly the ones Joss and I have watched recently or for the first time this year. Other suggestions include:

What is your favorite family Christmas movie? Did I miss anything painfully obvious? Feel free to suggest some other holiday movie-themed activities/foods in the comments! And enjoy your Christmas movie night!

This article was originally published in Tara Rittler’s Spaghetti on the Wall blog in Dec. 2021. 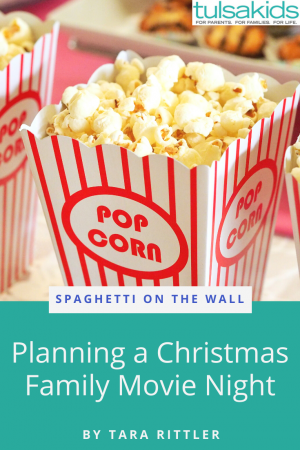