Christmas Crafts and Other Festive DIYs

I didn’t intend to deck the halls quite so early this year – after all, it’s not even (quite) Thanksgiving! But I intend to share a stay-home activity every day on TulsaKids’ social accounts leading up to Christmas. Which means – the pressure is on to do some Christmas crafts!

As a preview, here is what I’ve tried so far. If you have a favorite holiday activity – it doesn’t have to be a craft, but it should be something a family could do at home – feel free to share in the comments below. Or, email a photo and description to tara.rittler@gmail.com so TulsaKids can share it!

Personally, I miss the simple advent calendars we grew up with where you opened the door to reveal a picture behind it. Now, all the cheaper ones are filled with waxy chocolate. And you can of course spend big money on, for example, a Lego or Playmobil advent calendar.

But there are also many options for making your own Christmas countdown calendar. I chose this one because it was SO EASY. Here are some other ideas from CountryLiving.com. 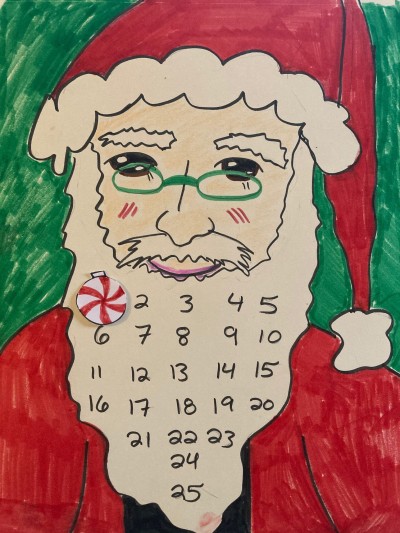 For this, all you need is a large piece of paper, preferably on the thicker side. Draw a Santa face on it, making sure he has a nice, bushy beard! Write the numbers 1 through 25 on the beard, leaving space in between the numbers. 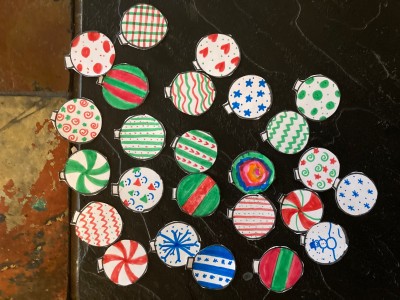 Now, you have two options: Either glue a white puff ball to the beard each day leading up to Christmas. Or, cut out some round ornaments or white circles that can be taped to the beard on the same schedule. I chose to make ornaments because decorating them gave Joss more to do. Also, I wrote some easy Christmas activities to do on the back of each ornament. If you go this route, keep it simple! My activities are: read a Christmas story, do a craft, watch a holiday movie, etc. The idea is that you’ll do whatever activity you choose on the day you choose that ornament. So make sure it’s nothing that would be a burden to do on a busy day. 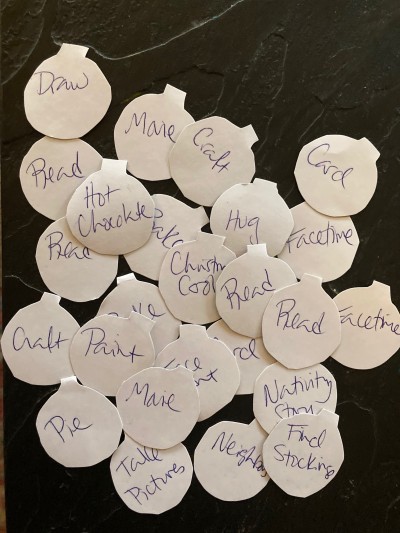 Give a Gift to Baby Grinch Game 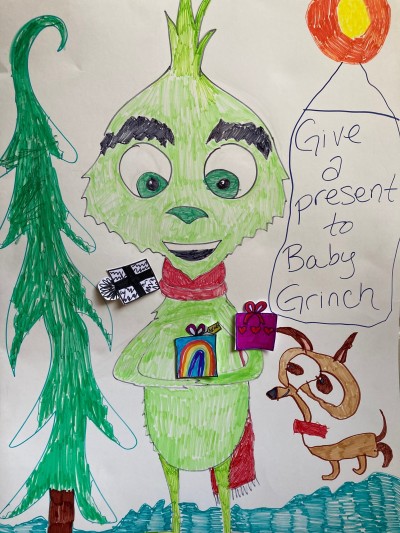 This started off as a “Pin the Heart on the Grinch.” However, when I was researching Grinch pictures to copy onto my poster board, Joss wanted me to draw Baby Grinch. He loves the Benedict Cumberbatch version. In that movie, the Grinch was an orphan who hates Christmas because he was alone on the holidays growing up. So in our version of the game, baby Grinch gets plenty of holiday love!

It’s self-explanatory, but draw a Grinch on posterboard. Your kids can help color it in. Joss also enjoyed adding his own version of Max the dog. Each child can draw and decorate a gift to give the Grinch. I just drew some basic presents, but Joss wanted to give him dog bones and a dog bone launcher so Grinch could play with Max. So this is an extra way for kids to get creative and think about being generous over the holidays.

Of course, it’s funnier to pin a heart on a grumpy Grinch, so go for that if you need some extra laughs! 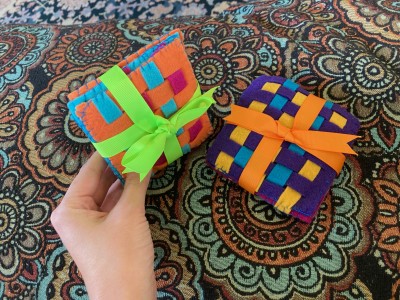 I’m aware that the coasters I made are garish as all get-out. But this is a fun idea if you’re looking for some homemade gift items that aren’t full of sugar. I liked the idea of making four complementary coasters and then tying them together with a note/ribbon.

1. Cut two squares of felt. (I just traced the outline of another coasters to determine the size. But it was about 4-5″) 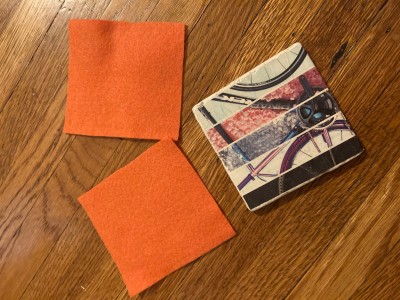 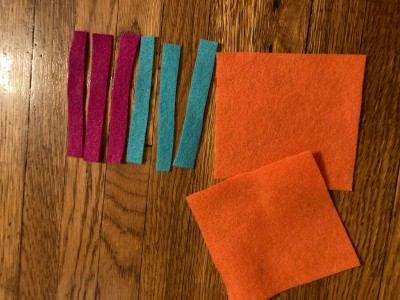 2. Fold one of the squares in half, and cut equidistant slits across the fold, stopping about 1/2 inch from the edge. 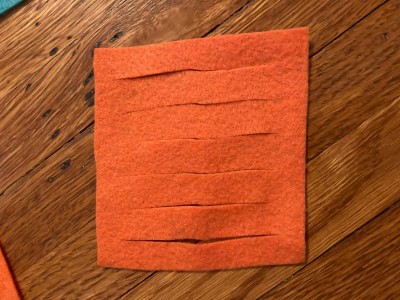 3. Using the other colors of felt, cut skinny rectangles that are slightly longer than your felt square. This is to make sure they don’t end up being too short. I was able to fit 4-5 rectangles of felt per woven coaster.

4. Weave a felt rectangle through the square with the slits in it. Repeat until the pattern is complete.

5. Put the other square under the woven square, and sew them together with a blanket stitch. Make sure to catch the woven strips with the needle as well (trim them first if they’re too long so that they don’t overhang too much.) 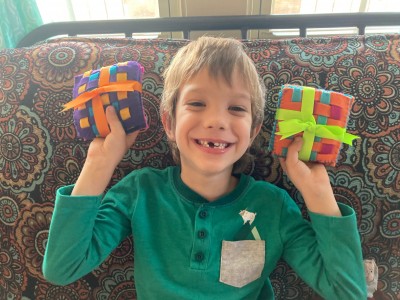 Joss has lost three teeth in the past month or so!

I shared a tutorial for making tassels previously, when I got into making tassel earrings for a bit. But this is an easy project the whole family could work on together. When you’re finished, string it up along the mantel, in your Christmas tree, wherever your house could use an extra festive flourish!

1.Wrap yarn around a small book, cardboard square, etc. about thirty times. The size of the item you wrap around will determine how long your tassel is. I chose a small book that was about 2 inches wide, and maybe 1/2 an inch thick. 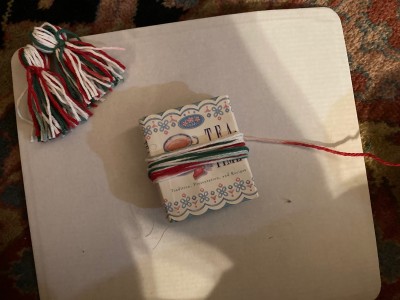 2. Cut off yarn, and remove the looped yarn carefully. Cut a length of yarn, and tie it around one end of the loop. 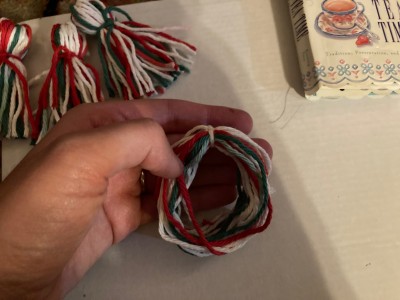 3.Snip the yarn loop in half opposite the side you tied together. 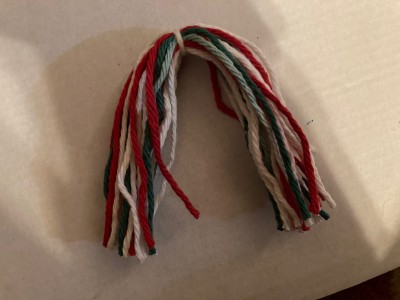 4. Cut another length of yarn, and tie it around the top of the yarn, about 1/4-1/2 an inch down from the top tie. Once this is done, trim the ends of the yarn so that they’re all about the same length. 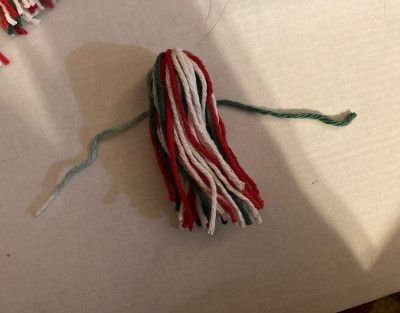 5. Repeat until you have the amount of tassels you want. Then, cut a long length of yarn and start stringing the tassels on it! They’ll pretty much stay in place without having to do any extra knots or anything. I saw a tutorial where it had you thread the loose yarn through the tassel loops using a crochet hook, but I didn’t have one. Instead, I just kind of pushed it through using a pencil. 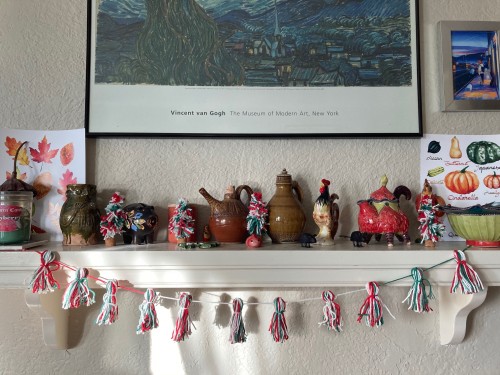 What Christmas crafts are you planning to do this year? Tell me about them in the comments so I can give them a try! 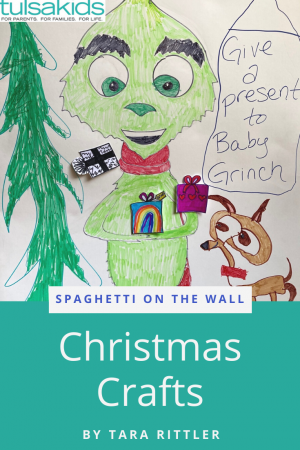