Parents! Do You Talk to Your Kids About Sex?

When one of my daughters was in sixth grade, we went to a sex ed class together. Kids (male and female) and parents sat around a table while an educator (who was a nurse) talked about contraceptives, STIs (Sexually Transmitted Infections), body parts, hormones and emotions. I know I learned a lot – who knew there were so many types of contraceptives? It was a good mix of practical and emotional. Contraceptives were passed around for kids to inspect. We also discussed feelings, hormones and how to have a plan before you’re in the heat of the moment. There were some scary stats about STIs (when you have sex with someone, you’re having sex with every partner that person has ever had! Yikes!). And there were snacks. This was probably the most important aspect for my daughter. In fact, the kids could write anonymous questions at the end of class to be answered at the next gathering, and I always knew which question came from my daughter. It wasn’t about sex or relationships, it was a suggestion for snacks: Could we have Oreos at the next meeting?

Maybe my daughter was a little immature for the class, but it did give her an opportunity to learn and ask questions, and it also let her know that I was open to having a conversation about sexual health. That can be a difficult place for many parents – it isn’t easy to talk to kids about sex. But a local campaign is giving teens, young adults and parents information and resources to have an honest, respectful and open conversation about sexual and reproductive health. The Talking is Power Campaign is an initiative of Power to Decide, an organization that provides information and resources for young people to plan or prevent pregnancies.

And, you can help them by filling out a survey. The organization is trying to find out how parents talk to their teens and young adults about sexual health and relationships so they can help provide classes, workshops or information that local parents need. I took the survey and saw some definite deficits in my own approach. Having access to more reliable information and ways to present it certainly would have helped me!

Laura Bellis, executive director of the Take Control Initiative in Tulsa, says that it is “critical for parents to engage with their youth about healthy relationships. Parents are the key for their teens to access health care. We want to help people feel empowered to have that conversation.”

“That’s just one touch point, though. It needs to be a continuous conversation,” Bellis says. “Sometimes kids have needed that conversation earlier than seventh grade. It’s important that parents be the go-to person. You don’t have to be the ultimate expert. Just be open to the conversation. You can say, ‘I don’t know, but I’ll find resources.’”

The Tulsa Campaign to Prevent Teen Pregnancy website, tulsacampaign.org, has toolkits and lists of suggested, age-appropriate books and resources for both teens and parents.

Talking to teens about sexual health and contraception has paid off in lowering teen pregnancy rates. The Tulsa Campaign to Prevent Teen Pregnancy started work in 2010, and by 2017, teen pregnancy rates in Tulsa County had dropped by slightly more than 53 percent. Oklahoma has the third highest teen-pregnancy rate in the country, so there was much work to be done, and much work remains to be done.

Even though teen pregnancy is down nationally because of funding for pregnancy prevention initiatives, getting teens the information about sexual health is now more difficult. The Trump administration cut funding to the Department of Health and Human Services’ Teen Pregnancy Prevention Programs, leaving health professionals dangling.

Most of the programs were aimed at high-risk communities where the teen pregnancy rate was still relatively high.

She also says that teens want their parents to talk with them, and the survey will give Bellis and her team the information they need to help parents do just that. Go to the short survey that will ask you about how you talked with your kids about sex and reproductive health. The survey results will be used to help formulate classes or sessions for parents to learn ways to talk to teens about healthy relationships, sex and reproduction.

“We need to learn enough (by doing the survey) to give parents what they need,” Bellis says.

Update: The Survey is now closed. 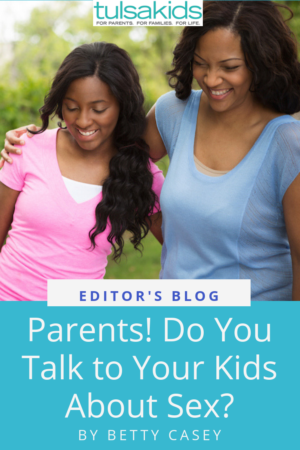