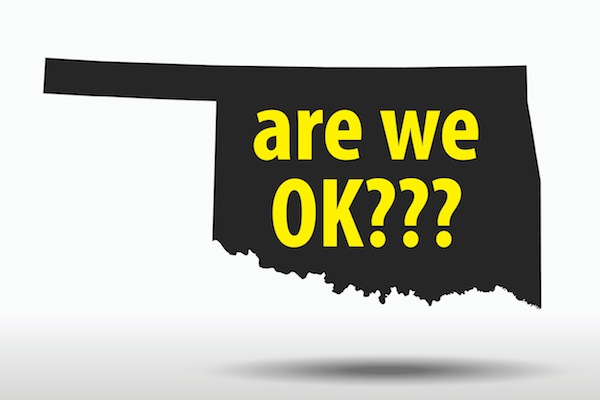 Tomorrow is the last day of session for the Oklahoma State Legislature. The Senate approved the $6.8 billion budget, and it now rests with the House to approve the proposal so lawmakers can start their summer vacation. While the budget doesn’t add to the cuts already imposed on education, most other government agencies and services take a hit. With one exception – the Legislature.

That’s right. The Legislative Service Bureau, the state agency that provides research and computer services to legislators, received a 184 percent funding increase from $4.8 million at the beginning of fiscal year 2016 to approximately $13.8 million for fiscal year 2017. Huh? So, while lawmakers are asking parents to send their kids to overflowing classrooms, asking superintendents to trim teachers, administrative and support personnel and forcing schools to cut class offerings such as languages, music, art and AP classes, the Oklahoma Legislature is making sure that salaries of staff members and legislators can be kept fully funded. That $9 million could go a long way in helping children, the elderly and struggling families in Oklahoma.

If you’re an Oklahoma parent, you probably won’t find much to like in this $6.8 billion budget.

While schools were somewhat spared in the sense that they didn’t receive the draconian cuts that were predicted, the draconian cuts had already happened and school funding has been in a strangle hold for years, so there’s not much to cheer about there. If you have a child in public school, you already know what you’re dealing with. I just hope we don’t become accustomed to overcrowded, substandard schools and begin to accept them as the new normal.

Because Oklahoma has stubbornly refused to expand Medicaid under the Affordable Care Act, Oklahoma is essentially turning down federal funds (our tax dollars) for medical services. This hurts the poor, including children, who depend on these services. This is especially detrimental to rural hospitals. NewsOn6 reported last night that Eufaula’s only hospital closed and will become an urgent care facility, open only during the day. Too bad if you’re having a stroke in Eufala. You’ll have to drive 30 minutes to a hospital. But, be comforted in knowing that the Legislature has kept its staffing services in place!

While the Legislature could have suspended an income tax cut trigger for the wealthiest Oklahomans back in January, it chose not to, which is part of the reason we’re in this mess now. Instead, they took away the Earned Income Tax Credit that allows struggling families at the bottom of the economic ladder to keep more of their income. Most of the 330,000 families who are impacted by the cut have children.

According to an Oklahoma Policy Institute blog, the budget will “leave DHS 4 percent below its 2016 funding level” to the tune of $103 million in the hole. This may be the cruelest cut of all because it truly hurts Oklahoma’s most vulnerable citizens – those who can’t advocate for themselves. Adults in nursing homes, those with developmental disabilities, children in subsidized childcare and staff for the ADvantage program that helps elderly people stay in their homes rather than go to nursing homes. The safety and security of old people and children is at stake with these cuts. Is this okay for Oklahoma?

With major slashes to the higher education budget, you’ll most likely see some negative effects if you have a child in an Oklahoma college or university. It will be up and down – and not in a good way. Tuition, fees and class size may go up. Course offerings and student services will probably go down. So much for making sure more Oklahoma students graduate from college and are prepared for careers. It would be nice if policy makers would put their money where their mouth is.

Those are just a few of the hits families will be taking with this budget. It’s especially disingenuous that lawmakers ask government agencies and schools to look at waste, to trim to the bone, to cut services, while they are unwilling to do the same and, in fact, provide themselves with a several million-dollar increase. We can and should do better. Once these services are cut and the services decay, it will be difficult to ever recover.

There’s still time for lawmakers to come up with better budget options.