Oklahoma Schools Near the Bottom

Sadly, according to Education Week’s “Quality Counts” report card released today, Oklahoma’s education system ranks 48th out of the 50 states and the District of Columbia in quality of education. Our letter grade was a D+. States ranking lower than us were New Mexico, Nevada and Mississippi.

Oklahoma’s “chance-for-success” index, which measures the impact that education (or the lack thereof) has on people, was low as well. We ranked 43rd. No surprise there. If we are not supporting and investing in education, we can’t expect to have successful citizens.

If you’re interested to know the top state, it was Massachusetts.

OK, so the information is there and it looks pretty bleak for our state. My fear is that Oklahoma policy-makers will use this report as a rhetorical sledge hammer to shove more money into high-stakes standardized tests, more data mining just for the sake of gathering data, and more shifting of funds to charter schools without investing any more dollars in public education. According to Quality Counts, Oklahoma was 45th in per-pupil expenditures.

I wish our lawmakers would listen to teachers such as Karen Hendren and Nikki Jones, the two Skelly Elementary teachers who showed the common sense, professionalism and the courage to stand up to say that all the mandated high-stakes tests were not only eating away at valuable instruction time, but actually harming their students. Here is their letter to parents.

Today (in between stories and pictures of Garth Brooks), the Tulsa World reported that the CEO of the company (Tripod Education Partners) that created the student surveys that Karen Hendren and Nikki Jones found particularly objectionable spoke to a TPS task force of 20 teachers and two administrators. The task force is studying the use of the surveys with children in second grade and younger. Many teachers besides Hendren and Jones found the surveys to be developmentally inappropriate for young children.

Maybe it’s just me, but I found this quote from CEO Rob Ramsdell particularly objectionable. He is quoted in the article as saying; “The only way to provide educators with real, valuable feedback is to gather it from multiple sources multiple times over multiple years. If we learn more about our students’ experiences, it can help us improve as educators.”

Hendren and Jones have a very good handle on each one of their young students. I would bet they know a lot more about each child’s family than the Tripod test could tell them. I’m sure they know about each child’s strengths and weaknesses academically, but I’m also sure they can identify each child’s unusual quirks, emotional strengths and weaknesses and learning styles. Good classroom teachers know this and don’t need a survey filled out by a 5-year-old to tell them.

Why not spend the $250,000 that we’re using on this test to hire more teachers. Or maybe some reading and math specialists to work with small groups of students? With Oklahoma’s low pay, we could get, what, eight or 10 classroom teachers? And maybe the administrators – principals, assistant principals, site superintendents – could spend more time going into the classrooms to evaluate and provide support for the teachers. Those evaluations from administrators and mentor teachers could be the “multiple sources” that Ramsdell refers to. Class sizes could be reduced so more effective, innovative methods could be used by teachers such as Hendren and Jones who want to provide creative and interesting environments for their students. I’m just asking for a little common sense. Does EVERYTHING have to have a data point attached to it? 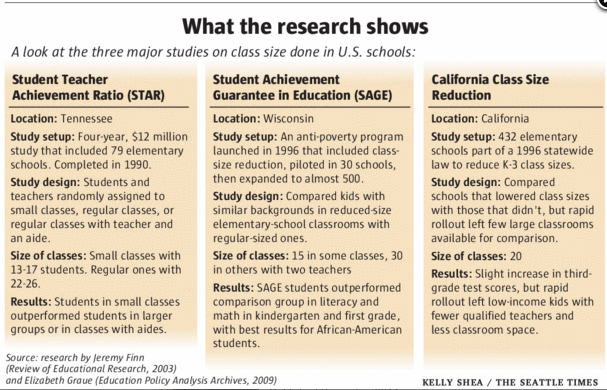 Let’s just look at one aspect facing Oklahoma’s public schools – class size. I know there’s sort of a myth out there that says class size doesn’t matter. It depends on the research you’re looking at. Here’s a quick table that originally appeared in the Seattle Times on the three major studies done on class size. Smaller class size has the least impact when teachers don’t take advantage of it (in other words, they didn’t change their teaching style with the smaller class), and when inexperienced teachers are put in the classes rather than teachers with more years of experience. But the studies show, even in those instances, students in small classes do better than their peers in large classes, if for no other reason than they become more engaged in learning. So, knowing that, why aren’t we lowering our class sizes and using experienced teachers to not only teach, but to develop methods that they could use to train inexperienced teachers? I’ll answer my own question – because it’s easier and less expensive just to give a few hundred thousand dollars to testing vendors.

Research does not show that mandating more and more standardized high-stakes testing improves educational outcomes. It gives politicians and testing vendors with financial interests some numbers to throw around, but let’s put the kids first for once. And let’s ask the professionals – the teachers and administrators who are working with our kids every day – what kind of support and supplies they need to educate our children. And let’s include parents. They are their children’s first teachers. How can we support them in giving their children the best start in life to go to school ready to learn? We won’t all get everything we want, but can’t we at least have the conversation?