I am now into Week II of my October Unprocessed Challenge. For some background on this, go to www.eatingrules.com/october–unprocessed. This is Andrew Wilder’s website where I found out about the Challenge.

Starting out on this, I really felt that I was a conscientious label-reader. I’m not obsessive about things, mind you, but I do like to eat food that isn’t loaded with chemicals and sugars. Since I buy the groceries and I’m the cook in our house, my husband has to depend on me, too. This is a guy whose mother used to have “tea parties” for him after school with Fritos, cream cheese and Coke. My husband was the third of four boys, so that could’ve had something to do with it. Anyway, don’t worry. I don’t think my husband or my mother-in-law reads my blog. And if you are reading — love you!

Back to the grocery shopping. My husband likes to have cereal in the morning. If I’m not having my typical smoothie after I run (recipe in a previous blog), I have steel-cut oats. I know they take a long time to cook, but you can always make it the night before and heat it up. My husband likes a certain kind of cold cereal that has a super healthy-looking box. Don’t be fooled by packaging. This cereal had about three kinds of sugar in it. I think I told you last week that I had to switch cereals on him. There really are cereals out there with three ingredients. Add fruit to it. Or if you have to add sugar, at least you’re adding it so you know how much you’re eating.

The other thing you can do is make your own granola. I’ve used several recipes, but I found one in Bon Appetit that everyone on my family really likes. My daughter Anna likes to make it — it’s very simple. It does have a little brown sugar and some honey, but not too much. I’m going to make it next Tues, on KTUL Channel 8’s Good Morning Oklahoma. I’ll give you the recipe in my blog next week.

Today on Good Morning Oklahoma I made chicken fajitas. They’re so easy. You don’t need a recipe and you can whip them up in a flash so that dinner can be on the table in less then 30 minutes. They also fit my October Unprocessed Challenge. However, I did have to cheat a little on the tortillas. I use wheat tortillas, but in addition to the whole wheat flour, water and salt there were a couple of ingredients that I didn’t recognize. They seemed to be minimal, and I couldn’t find any without a couple of extra ingredients, so I chose the brand that had the fewest unrecognizable additives. You could make your own tortillas, but of course that would take a little longer. I’ll include a recipe below.

The insides of the fajitas are simple. I used chicken, but you could use steak (flank steak is probably best) or a combination. The quickest thing to use is boneless, skinless, no added hormones or other stuff, chicken breasts. How much depends on how many people you’re feeding. This is a good meat stretcher recipe because you’re also including vegetables in the mixture.

Slice the chicken breast into thin (about 1/4-1/2 inch) slices. You could do this the night before and marinate the chicken in a zip-lock bag with lime juice, chili powder, cumin, fresh chopped cilantro and chopped garlic.

If you’re doing it at the last minute (which is what I usually do) put the cumin (at least a tsp or to taste– I love cumin, so I use a 3 or 4 tsps at least) and chili powder (1 Tbls or to taste) in a large skillet and let it cook for about a minute to release the flavors, put a little canola oil in the pan and add the chicken, a little salt and cook until cooked through. (Don’t use Taco flavor packets for the seasoning — read the label. What is that stuff?)

Remove the chicken from the pan and add a little more oil. Thinly slice green bell pepper, onion, red bell pepper and chop garlic and add to the pan. Stir and cook until soft. You can also put in a fresh, chopped jalapeno pepper or a pablano pepper. Add a little more chili powder and cumin to the vegetables.

When they’re about done, add the chicken back in to heat and mix together. Squirt some lime juice in at the end and add some fresh, chopped cilantro (optional).

The amount of chicken, peppers and onions that you use depends on how many people you’re feeding, so adjust accordingly. Put fajita filling in warm tortillas and enjoy! You can add avocado, sour cream, grated cheese or salsa, depending on your taste. Serve the fajitas with a simple side salad of greens, tomato and green onions dressed with lemon juice and a little oil  and salt, and a side of black or pinto beans. Dinner is served!

The nice thing is that green and red bell peppers are on sale right now. Reasors had green peppers 2 for a $1 and red peppers were 77 cents each. Some of you may have some bell peppers growing in your backyard (I have green), so this is a good way to use those. Here’s my garden now. It looks crazy I know. I had lots of tomatoes and the plants have produced a second time! I planted zinnias where the radishes and lettuces were and you can see my basil has taken over. There’s oregano and a couple of pepper plants in there somewhere. I’m making cheese tortellini with walnut pesto tonight to use some of that basil. 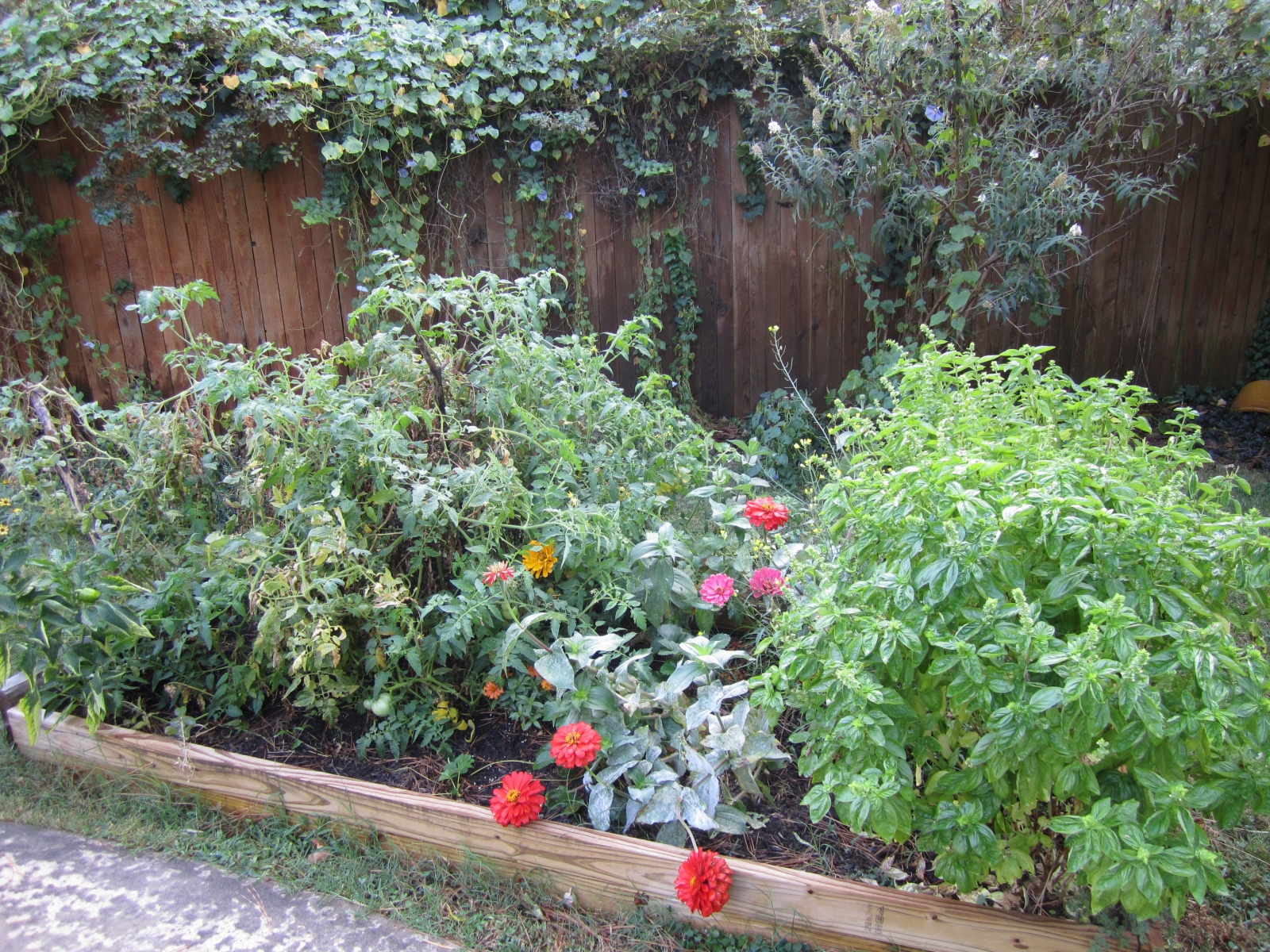 OK, if you want to make your own tortillas, mix two cups of masa with 1 1/4 cups water or enough to dampen dough. Mix with your hands, then divide the dough into about 16 balls. Cover the balls with a kitchen towel and let rest for about 30 minutes. Flatten the balls into a tortilla and heat in a skillet over medium high heat for about 30 seconds on one side and about a minute on the other.

So far, so good with the Unprocessed Challenge. Are any of you doing it?