My Morning at Luke’s Diner

I never get up at 6 a.m. and immediately jump in the shower. Not without at least three cups of coffee first. But this morning was different. It was the birthday of the “Gilmore Girls,” or at least the celebration of the first show, which aired on Oct. 5, 2000.

Here’s a little trip down memory lane for you fellow fans. I used to watch the show with my two daughters, and we’re all hooked. Come to think of it, that may be why they’re so hooked on coffee.

As a fitting tribute to “Gilmore Girls” day, coffee shops across America became Pop-Up Luke’s Diners, which is the reason that I popped up at 6:15 a.m., much to the surprise of my husband and my dog, jumped in the shower (okay, full disclosure, I did have a cup of coffee from the day before ready to go in the microwave so I wasn’t completely caffeine-free), got dressed and headed to 918 Coffee on 11th Street, making it just in time for the 7 a.m. opening. (If you’re a Gilmore Girls fan, you will understand that you will need to read that paragraph really, really fast).

I had to park about five blocks away and was positioned about midway through the line behind two TU students who had 8 a.m. classes and a couple of young women behind me who were dressed as Sooki. Up ahead, a “Luke” in plaid shirt and backwards baseball cap, explained that he had brought his girlfriend as a surprise. She was thinking that maybe it was a trip to Florida, but it was a trip to a coffee shop. It was sweet. I’m not sure he understood her devotion to the show, but any guy who is willing to dress like Luke and plan a surprise for his girlfriend like that is pretty great. 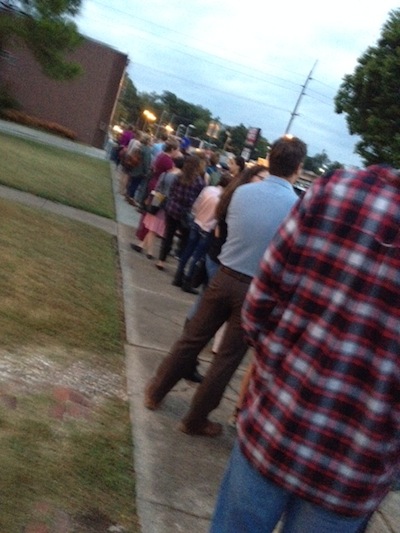 After an hour of waiting, I nearly missed getting my free coffee in a cup sporting a quote from Lorelai from Season 1, episode 2 (“This is a jumbo coffee morning. I need coffee in an I.V.”)  and a sleeve with a Luke’s Diner logo. One of the Sookis behind me swore that she would keep hers “forever,” and the TU students ahead of me felt that it would be okay to be a little late to class, especially considering it was a women’s studies course. 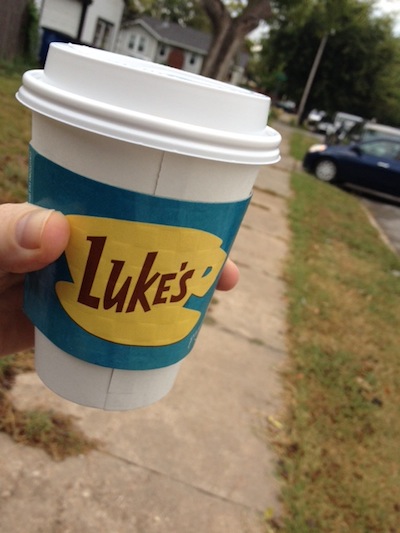 What is it about the “Gilmore Girls” that attracts such fandom? There’s the list of quirky characters: Kirk, Sooki, Miss Patty, Mrs. Kim, Taylor Doose, Paris, Michel, Lane… There’s the sweet relationship between Rory and Lorelai. And the boyfriends – Dean, Jess and Logan. And, of course, the sexual tension between Lorelai and Luke. And the town – who wouldn’t want to live in Stars Hollow? And there’s the Carol King “Where You Lead” theme song. Did you see the episode where Carol King did a cameo? What about Madeleine Albright?

My personal love for the show is that it was a show for smart girls. I loved watching it with my daughters. It wasn’t a show about girls being mean, or going to malls or wearing sexy clothes. Rory’s main goal in life was to go to college – and she had cool friends like Lane, a drummer in a rock band. We still use Gilmore Girl references all these years later. If I say that one of my daughters has a friend like Paris, she knows exactly what I mean.

I can’t wait for Nov. 25, when the cast returns for four shows on Netflix. I wonder what Rory’s doing now that she’s out of college? Any guesses?

If you haven’t seen the “Gilmore Girls,” there’s plenty of time to binge watch before November.