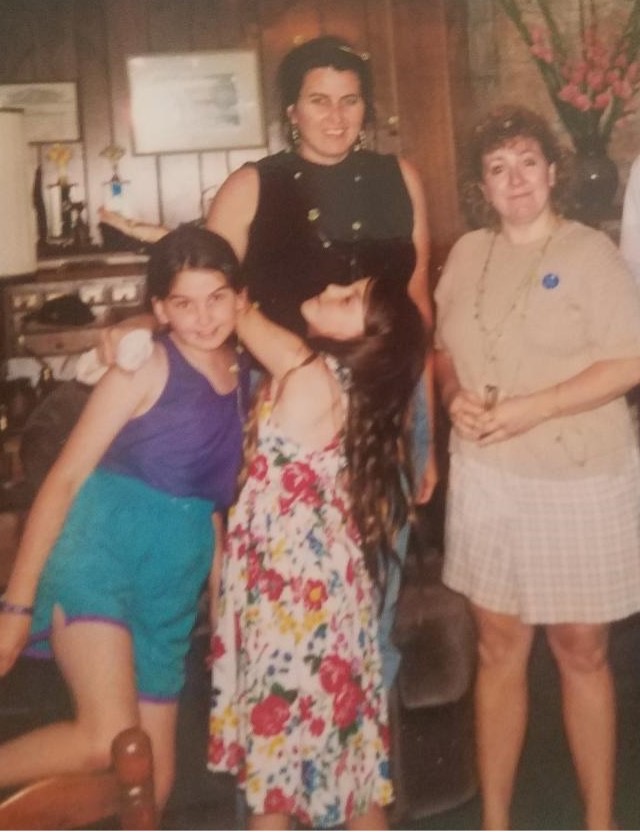 Katie, on the right, visited my daughters and me in the mid-’90s during one of her cross-country trips.

One of my best friends died last week. My heart is breaking, the tears are flowing freely, and there is a visceral pain each time I use the past tense about her. Katie and I had been good friends since junior high. Using the term junior high instead of middle school should give you a clue how long we’d been friends, over fifty years! Fifty years of friendship that had ebbs and flows, ups and downs, but through every stage of life, our relationship was one of the constants in my life. Her absence will be a sore spot I test over and over, like a tongue seeking the gaping hole created by a missing tooth. As I age, I am losing more friends, and it’s painful. Ecclesiastic says, “For everything, there is a season, a time to be born, a time to die.” It’s true, but that doesn’t mean I have to like this season of life.

My friendship with Katie began when we were twelve years old. Together, we stumbled our way through the awkward early teenage years of trying to survive the social torture that was junior high. We became wild teenagers in the ’70s, wearing bell-bottoms, hot pants, and halter tops, cruising the “restless ribbon,” and testing our parents’ patience. After high school, our journeys started taking diverse paths, but we always came back together for holidays and summer breaks.

As we grew older, our lives went in completely different directions. I had children and began a more traditional life. She continued a somewhat nomadic lifestyle, letters and postcards alerting me to her whereabouts. She would make surprise visits on my doorstep as she crisscrossed the country, pulling up in a beat-up old car filled to the top with clothes, bedding, and usually a cat or two. Her mental health issues intensified as we aged and forced her to become planted in California, where better services were available. Our email and social media communication increased as she became more isolated by her health and financial circumstances. Her life became narrow. Katie’s computer was her link to the outside world, her cats were often her only companions, and a collection of DVDs of The Waltons became her family. She said immersing herself in the happy world of The Walton’s family gave her a temporary feeling of contentment and allowed her to pretend that was her reality. I think it was that reason she also loved hearing details about my children and grandchildren. It gave her a sense of connection, a family by extension.

Katie and I emailed back and forth three or four times a week, sometimes merely to check in because I worried about her. Other times I received long, rambling, disjointed emails which reflected a manic stage. I keep expecting an email from her telling me all about what happened to her in the hospital. She was terrified of needles and pain, so I prepared myself for an epic story of her latest ordeal. She loved to write, the words flying frequently and abundantly between us except when she was in what she called “The Big D” (depression). How can it be possible that my email inbox won’t be filled with messages from her anymore? It will take months for me to accept this new reality and much longer to get over missing her.

The end of Katie’s life fills me with melancholy. A combination of struggling with mental health issues, progressive hearing loss, multiple chronic health issues, and poverty led Katie to live an isolated life. As the years went by, friends dropped out of her life until only a few of us loyal stragglers remained. I don’t think Katie was unique in her situation. Unfortunately, many people live on the fringes of society – some by their own choosing, some because of disabilities or poverty. Loneliness is an epidemic unto itself. Receiving proper medical care in America is often reserved for those with money, and the lack of appropriate mental health care in our country accounts for tragedy upon tragedy.

There has been too much death in the last twenty months. So many deaths that we’ve all become weary and somewhat numb to the growing death toll, disassociating the fact those numbers are actual people. My friend did not die of Covid, yet she was a victim of the pandemic in some ways. When she began seeking help in the early summer, the emergency rooms in her town were packed, and she was sent home with minimal assistance. They were busy taking care of people who were fighting for their lives. That’s what the medical personnel were trained to do, treat the most critically ill. Katie had no medical insurance beyond government assistance. Because of her limited ability to hear, she wasn’t able to communicate effectively, and she had no one to advocate for her. It was easy to pass her by, to diminish her symptoms when there was a room full of people suffering from Covid.  By the time she received appropriate care, she had lost seventy pounds, and her condition was irreversible. She didn’t die of Covid, but Covid impacted the care she received, or maybe more accurately, the care she didn’t receive.

The heartache of losing precious friends is the worst part of this season of life.  I remember my parents going to funerals regularly as they aged. It became an integral part of their social life, but that was when they were old. I’m not old yet – or am I? Grief feels heavy, an almost tangible entity taking up space in our heads and hearts. Grief is an uninvited guest no one wants, but we must find a way to deal with the presence. Writing is how I cope with emotions, so thank you for indulging me. As Banksy said, “They say you die twice. One time, when you stop breathing and a second time, a bit later on, when somebody says your name for the last time.” Writing about Katie allows me to extend her life a little longer.

Right now, I’m focusing on the fun times we had together, the memories from our youth we continued to laugh about, the precious gift of knowing another person’s true heart. I’m thankful for friendships, even though the ending is painful. I suppose it is not truly the end of a friendship as long as one person holds the cherished bag of memories. I’ll be that friend for Katie, occasionally pulling a memory out of our shared bag and allowing myself the pleasure of remembering her. To commemorate our long friendship, I may even take a cruise down the old “restless ribbon,” blaring some ’70s music and remembering our youth. I’ll keep the memory of Katie alive, but I’ll leave the hot pants and halter tops exactly where they belong, in the past.

“When I think of death, and of late the idea has come with alarming frequency, I seem at peace with the idea that a day will dawn when I no longer be among those living in this valley of strange humors.

I can accept the idea of my own demise, but I am unable to accept the death of anyone else.

I find it impossible to let a friend or relative go into that country to no return.

Disbelief becomes my close companion, and anger follows in its wake.

I answer the heroic question ‘Death, where is thy sting?’ with ‘It is here in my heart and mind and memories.'”

~ Maya Angelou, When I Think of Death 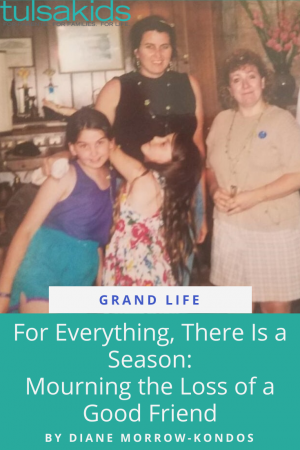 Embracing a Year of Change (Or Faking it Until I Make it?)

Thanksgiving - Time to Pass the Matriarch Crown to My Daughter

Meeting a Critical Need for Girls in Tulsa