Moms not only take on most of the physical aspects of household maintenance and child rearing, but also maintain the stressful mental checklist.

For moms, the most stressful labor is often the kind that isn’t immediately noticeable to many of us. It’s about taking care of not only a few loads of laundry, but also all of the side projects that come along with that. Is there enough detergent for each of these loads? Are there any clothes upstairs that didn’t make it into the wash? Where should each stack of clothes go once they’re dried?

It’s that invisible, mental checklist that makes up the bulk of many mothers’ responsibilities. In retrospect, having grown up with three brothers, I can only imagine how much information my mother had to keep track of. Sorry, mom.

“Much of the research on gender differences in household labor has focused on the division of more tangible, physical chores like cooking and cleaning,” Ciciolla said. “Little attention has been given to the mental management of that labor, in part because it is difficult to capture and quantify, and because it is an aspect of household labor that is generally taken for granted.”

As such, both Ciciolla and Luthar were interested in learning how much of this behind-the-scenes management was divided between mothers and fathers, as well as whether this generally unseen labor had any effect on women’s wellbeing.

“We found women overwhelmingly felt they were the primary household caretaker,” Ciciolla said. “Although we expected women to take on most household management, we were surprised to see just how many reported that – 70 to 88 percent of the women in our sample – said they were solely responsible for making sure routine household tasks got done.”

Additionally, 50 to 78 percent of the women from the study said they were the ones primarily responsible for the well-being of their children such as getting to know their teachers, making sure they get certain vaccinations, and meeting their emotional needs.

“These women in particular expressed feelings of emptiness about their life and less satisfaction with their partner or spouse,” the professor said. “Their overall well-being suffered as a result of this workload.”

One Tulsa mother, who wished to answer anonymously, expressed concern over these responsibilities extending beyond her children.

“I have a fairly attentive husband, but I’ll usually go to the grocery store and pick things up that my husband forgets,” she said. “I’ll often take care of these huge projects and, to my husband, it won’t even occur to him that it had been taken care of or the amount of work it took to get that done.”

Another parent, Lindsay Graham, said much of her invisible checklist seems to go unnoticed by others.

“As a culture, it’s almost like we’ve developed two separate mom categories: there’s the stay-at-home mom and the working mom,” Graham said. “There’s judgment on both sides, but it doesn’t matter because we’re all in the same boat.”

Graham also discussed being primarily in charge of her children’s wellbeing.

“My husband is a wonderful father, but any time he’s asked ‘do you let them do this’ or ‘have they taken this test,’ he usually refers to me,” she said. “None of it is written down – it’s all up in my head, and it falls on me to remember it.”

Therapist Ryanne Mitchell attributed this problem’s persistence to a compounding effect that occurs within our society.

“There are societal pressures and this neediness that mothers feel,” she said. “In Oklahoma, at least, there’s this stoicism – we often don’t accept help. We’re all about ‘pulling ourselves up by our bootstraps!’”

Additionally, Mitchell said that many mothers have a tough time expressing needs instead of criticisms.

“Don’t fall into resentful thought patterns,” she suggested. “Focus on what needs to get done for you and your wellbeing.”

What’s typically needed, Mitchell has found, is a certain degree of acknowledgment from other family members.

“There’s that art of noticing, so increased appreciation and gratitude goes a long way,” she said. “However, I get annoyed with the stereotype of the bumbling, idiot dad. It’s not that they’re incapable of appreciating or contributing to the work that moms do.”

This isn’t a one-sided issue, though, as Mitchell encouraged both parents to take note of their partner’s body language throughout the day.

“When we stress, we slow down and become lethargic, so when we see our partner doing that, it’s important to step in and lend a hand,” she said. “That’s on both sides because dads sometimes feel disempowered, too. Both partners need to coordinate with and empower each other.”

Similarly, Ciciolla emphasized the tremendous difference a spouse can make by easing their partner’s burden – even if the workload still isn’t evenly distributed.

“Most of these moms are working outside the home,” Ciciolla said. “On top of that, these burdens were greatest when their working status didn’t align with their hopes and dreams.”

It’s important to note, too, that Ciciolla’s sample was of more highly-educated, upper-middle-class families.

“We can’t necessarily generalize, but these women do have more options and resources,” she said. “So I imagine that families with less financial stability feel at least the same level of negative effects, if not more.”

Throughout this study, the professor also gained some insight on how this invisible workload links to child development.

“Children’s wellbeing is closely tied, even interwoven, with the wellbeing of their mothers,” Ciciolla said. “Being able to recognize and address inequalities in invisible labor can allow women and families to create households that are more functional and less burdensome on specific individuals. This will benefit more than just women’s qualify of life, but also the quality of their marriages and the wellbeing of their children.”

Ciciolla maintained that when women are at their best and feel supported, they can have the emotional energy to engage with their friends and family more authentically. Considering how much of a mother’s time is spent caring for others, any effort that family members make to ease that burden gives mom more of that crucial time to take care of herself – both physically and emotionally. 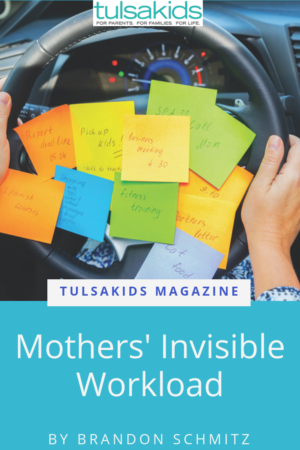