In a Montessori classroom, you’ll see children pouring and tonging, peeling potatoes, chopping and slicing with knives, sewing and table scrubbing — practical tasks you do in life.

Jodie Whitman is the director of Lake Hills Montessori in Tulsa, an early childhood program for children ages 18 months to 6 years.

She says this practical real-life education teaches children responsibility and helps them to read.

By moving left to right and top to bottom, the activities reinforce the reading coordinates even before children start reading.

“When you’re doing all these different things, it’s the hand and eye coordination that you’re developing,” Whitman says, “And when you’re doing the tonging or the pinching skills, like for dropping water droplets on top of a specific point, that’s building up that pincer grip, which is a prerequisite for writing. You have to have a strong pincer grip in order to hold a pencil or pen.”

Whitman’s sister, Sandy Karnstadt, is the Head of Schools and Founder of the two Lake Hills Montessori campuses in Texas.

She says these activities also develop the student’s concentration and completion of a task. Then, they put the materials away in consideration for the next child who uses it.

“You can’t just leave a knife. You have to go put it where it belongs, so nobody gets hurt,” Whitman says.

That care for others is also part of the social graces curriculum in the Montessori model.

“We give them the mindset that it’s your responsibility to take care of yourself and your surroundings and others, and if you have a conflict with someone, you need to resolve that,” Whitman says. “You’re a peacemaker versus going to tattle-tale to the teacher.”

That practical, tangible method is also used with academics.

Whitman says the Montessori materials lay a foundation of knowledge that stays with students.

“Your hands are the tool way to your long-term memory,” she says. “So, when you’re manipulating concrete things with your hands – like you can hold 1,000 beads versus 10 beads – you feel the difference and you remember that. You remember which one is larger just because you’ve experienced it.”

Another example is what Montessori refers to as the physical alphabet — wooden, movable letters.

“[Children will] spell words and eventually make sentences, which continues into journaling, all before 6 years-old,” Whitman says. “And when they’re using these letters, the consonants are painted red, and the vowels are painted blue.”

The children unconsciously pick up the difference, so when they are ready to learn the vowels and consonants, they already know them from manipulating the red and blue letters in their early years.

“We believe that coding is more important,” Karnstadt says. “You have to be able to code before you can decode. Writing is the code, and reading is the decode. So, we teach the children how to represent the sound with the physical alphabet, which leads to writing.” 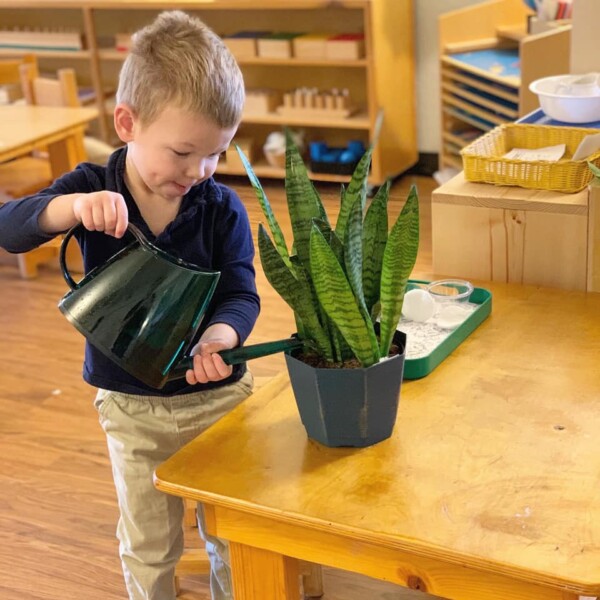 This little guy is watering a plant learning how to “take care” of the things around him. Photo courtesy Lake Hills Montessori

A method that builds confidence

The benefit of Montessori, Karnstadt says, is that students are confident and capable of their own learning.

“The confidence stays forever,” she says. “If you think you’re smart, you’re going to continue to try to be smart and believe that you can figure out a problem, and they become the leaders.”

Whitman says a Montessori early childhood education creates independent, self-solving people who are kind and courteous to the people around them.

Older children are given opportunities to demonstrate that confidence and kindness by helping to teach the younger children what they know.

At Lake Hills Montessori, Whitman says, the kindergartners are leaders and admired by the younger children.

“They have more freedom,” she says, “They also are helpers in the morning. They can volunteer. They get to wear little vests and help the children arrive to school. They’ll help them out of their cars. They’ll walk them to class. They’ll carry their bags.”

How does Montessori stand out?

“The biggest thing I think is traditional settings create followers,” Whitman says. “And a Montessori or Waldorf or Reggio Emilia, I think, create free thinkers. They think outside the box. They’re not stuck with what they’re told to do and what the correct answer is. They’re willing to explore to find their own conclusions, which creates new things.”

Where did Montessori and Reggio Emilia Begin?

The Montessori method was founded by Dr. Maria Montessori, the first female doctor in Italy. She opened a school for poor, disadvantaged and previously unschooled children in Rome.

Like the Montessori philosophy, Reggio Emilia is an experience-based teaching method.

Jerry Bates is the Head of School at Riverfield Country Day School in Tulsa, which uses the Reggio Emilia approach to educating students from infancy through high school.

“Maria Montessori and Loris Malaguzzi, the founders of both approaches, knew each other,” Bates said. “Reggio Emelia — the approach — was founded in the same town, actually, with funding from the sale of a tank that was left there during World War II.”

Malaguzzi was a psychologist. In addition to the two founders’ backgrounds in science and their Italian roots, Bates and Whitman say there are similarities between the two methods.

“I think the similarities come with some of the materials that are used,” Bates says, “although Montessori materials are very structured, whereas in the Reggio approach, the materials tend to be open-ended.”

He says with the Montessori method the children are often learning independently. The Reggio approach is more collaborative — teaching students how to work within a group or within teams.

“They’re both led by the independent child, meaning it’s not one lesson for the group. Each individual child has their own lesson plan. If they were in a public school, it would be considered an I.E.P. – an independent education plan,” Whitman says. “It’s where all these people are focused on you, what your abilities are and what you need.”

Another difference between the two methods, she says, is that the Montessori method pushes big academic concepts before the age of 6. Children begin reading after age 4 ½ and age 5.

With the Reggio approach, Bates says academic content is embedded in the project work students are doing. Children learn to read up through the second grade and by the third grade, they are refining their skills and reading to learn.

The foundation of Reggio Emilia is that there are three protagonists working to develop a student’s learning: the child, the teacher and the parents.

“You’ll see a lot of sewing materials, writing materials, what you would typically call art supplies,” he says. “But you may also see some coding things, some electronic things, some wire, a lot of clay, different things that students can manipulate to show us what they’re thinking about.”

A fish tank in the infants’ room is another material that mesmerized the infants who crawled to it to look inside.

Bates says that one day he found his own infant daughter staring into the fish tank.

Even though she couldn’t articulate it, “I knew connections were being made,” he said.

Bates says another element of the Reggio Emilia approach is the Hundred Languages of children.

“A hundred languages is a metaphor for some of the materials that are used for students to use to express their knowledge or express what they’ve learned,” he says. “Oftentimes, that will be translated into an art project to submit an experience and so, by doing the active work, the creative work, they’re cementing their learning.”

One such example is a trip a group of students made to Tulsa’s landmarks.

“They did art projects based on using multiple languages,” he says. “Some were done with fabric and beads. Some were painting on wood, and it became an art installation that was really all about Tulsa.”

The students then curated an exhibit for their parents to see.

That experience also exemplifies the third teacher in the Reggio Emilia approach — the environment — which includes the spaces in the classroom.

And creativity is as much a part of learning the alphabet as writing it is.

“They also learn how to lay it out, using products from the woods that they picked up from a hike and other things,” he said.

“You try to build on kind of prior knowledge,” he says. “You may start with one theory and students are looking at it, and you may think the students want to go in one direction and then, all of a sudden, in talking with them, they want to explore something else and learn about something else. If it fits in that area and what you’re looking at, you can move in that direction and kind of all learn together.”

Like Montessori, real-life experiences are part of the learning in the Reggio Emilia method.“I have a note from one of our 3- to 5-year-old classrooms on my desk that is asking me to come meet with them because they need to take a picture and interview me for something that they’re learning about with school,” Bates said.

The students wrote the note and delivered it to Bates, and they scheduled a time for him to meet with the class. He says the experience taught them skill development in reading, writing and communication in a way that was fun and engaging for them.

Both Whitman and Bates say the benefits of their respective approaches are the critical thinking skills and confidence their students develop.

“They look for their own answers versus waiting and finding somebody to help them,” Whitman says. “It really changes the directional path of the way they approach knowledge. It creates life-long learners.”

“The creative elements of this type of work and the experiences that they have, the experiential learning really creates a love of learning that benefits them throughout their life,” Bates says. “They maintain their curiosity as long as they possibly can – and their creativity.”

Bates says collaborative learning is how education was meant to be, and it’s the direction public schools are taking with their STEM and STEAM programs.

“It’s to give students ways to attempt things, potentially fail, but fail at a smaller risk than they have before and learn from their mistakes, and then try to get it right,” he says. ”It’s a scientific approach to education.”

At the end of the day, Bates says, it’s the students who own their learning for their lifetimes.

Tips for parents for their child’s early childhood education

Whitman says it important to let kids struggle and fail.

“When a mom quickly puts on a kid’s shoes so they can get out the door, if you would just allow them to do it themselves, struggle, maybe even get on the wrong foot, it’s OK,” she says. “Celebrate the independence.”

In searching for an early childhood education program, Bates says to look for:

Mikaela LeBlanc is a freelance writer in Tulsa. 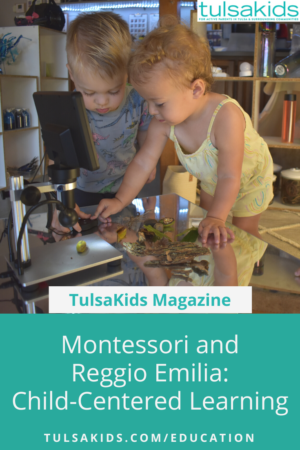