Apparently blue is a popular color when it comes to designing middle grade book covers. I started noticing this trend after several blue-hued books arrived at the TulsaKids office–and what’s more, they all looked pretty interesting! Continue reading to learn more about six middle grade books perfect for back-to-school season, or any time of transition.

The Boy at the Back of the Class by Onjali Q. Raúf 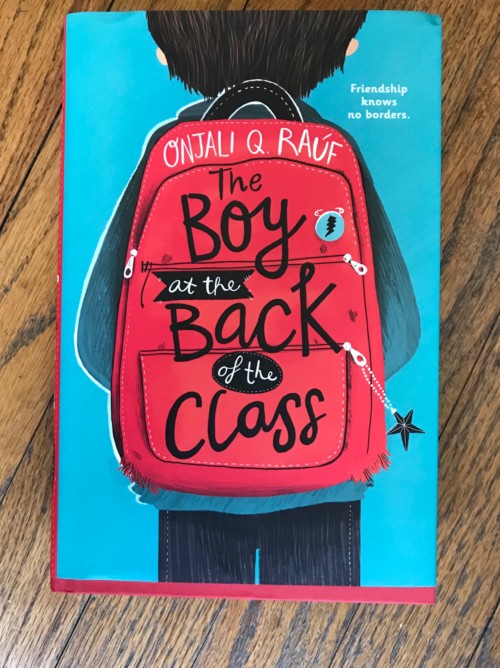 Released earlier this month, “The Boy at the Back of the Class” seems clearly written in response to the current political climate, as regards immigration. But note that this book was written by a British woman and takes place in London–anti-immigrant rhetoric is by no means a U.S.-only phenomenon.

“The Boy at the Back of the Class” is narrated by a young child who goes unnamed till the end of the book–a conscious decision by the author that, one reviewer speculates, “could be seen as a way for children to better imagine themselves into the story.”

Two weeks into the school year, a new boy named Ahmet takes the one unclaimed seat in the classroom. He is quiet and doesn’t initially take lunch or recess with the other kids, which draws the narrator’s interest and makes him/her determined to make friends with the new boy.

The narrator learns that Ahmet is a Syrian refugee–and then learns both what it means to be a refugee and Ahmet’s particular story, which involves being separated from his parents and currently living with a kind foster family. When the narrator overhears a pair of adults talking about the government’s plan to “close the borders” to refugees, she and her friends team up to come up with a plan to reunite Ahmet with his family before they are locked out of the country.

This book has a pretty strong message–about the importance of kindness and choosing to be openhearted rather than assume the worst of people. That we should welcome refugees, not fear them. The narrator’s instant affection for Ahment and determination to befriend him is heartwarming–a reminder that kids truly are, as my son’s school is fond of saying, “the best peacemakers we have.”

Solving for M by Jennifer Swender 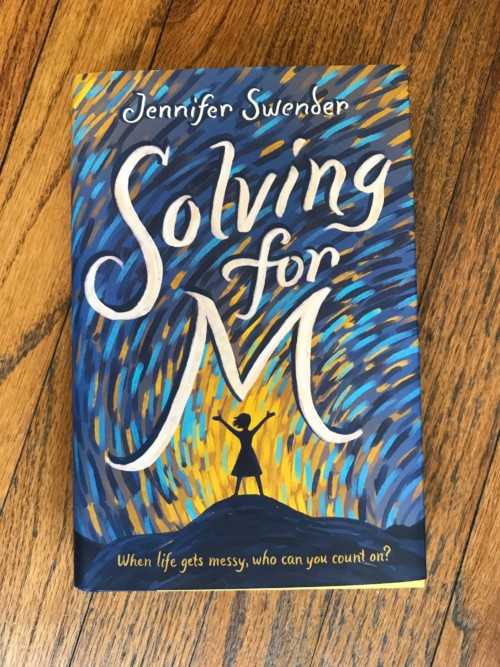 Two books I love (“Saving Francesca” and “All the Greys on Greene Street”) feature mothers battling depression. So when I saw “Number of doctor’s visits until Mom is better” on the back cover of “Solving for M,” I thought maybe this would be the case again. Not so.

“M” could stand for either Mother or Melanoma: This is the story of a fifth-grade girl who is dealing with a new middle school, finding new friends and her mother’s recent melanoma diagnosis. Thankfully, although Mika’s best friend from childhood drifts away at the beginning of the novel, she quickly finds a new group of friends–a science nerd who loves “punny” T-shirts and a high-achiever who bakes the world’s greatest cupcakes.

Mika is an artist who has never thought of her self as “a math person.” However, the novel is told in part through her Math Journal, where she is able to examine real-life troubles through the lens of math, using her creativity to turn math problems into engaging works of art. This weaving together of Mika’s math class and her home life gives “Solving for M” a unique narrative structure that makes the book really stand out. And of course, it’s nice to see a math-positive message–that you can be creative and still find inspiration in numbers.

Throughout, there are ups and downs with Mika’s mother–medication that makes her distant, tired and/or irritable, raised hopes and new scares. Initially, Mika tries to keep her mother’s diagnosis a secret, but soon learns to trust and confide in her new friends, who encourage her as they can. These developing and evolving relationships are an important and beautiful part of the book as well.

The World Ends in April by Stacy McAnulty 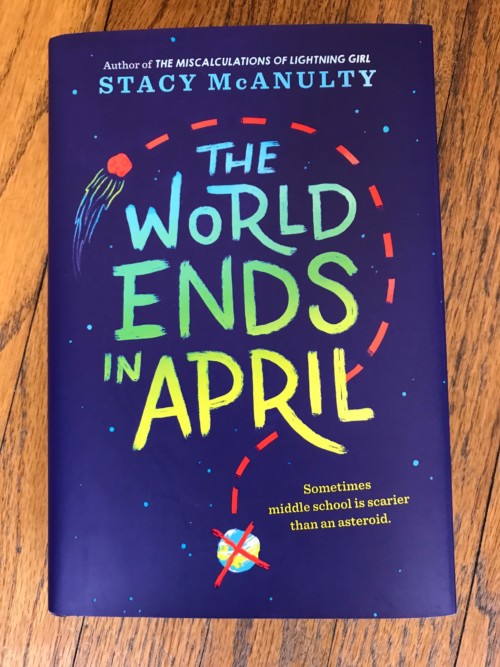 If you’ve been following Spaghetti on the Wall for awhile, you know that I didn’t love middle school–and that I love a good book with a shy, middle school protagonist learning to appreciate herself and find the right friend group. Eleanor, who stars in “The World Ends in April,” has just one friend–but not so much because she’s shy but because she’s a bit hostile, automatically mistrusting that her peers want to get to know her.

There’s a lot going on in this book: Eleanor’s rocky adjustment to middle school, combined with her friend Mack considering transferring to a school for the blind, her grandfather’s survivalist influence, etc. Additionally, there are lessons about media literacy and thinking critically about what you read on the internet.

Basically, Eleanor’s grandfather is a “prepper”–one who is constantly preparing for the end of the world, and (despite her father’s opposition), he has made Eleanor and her younger brothers do survival-type drills for as long as she can remember. Although Eleanor thinks she’s too old for this, she doesn’t want to hurt her grandfather’s feelings and ends up discovering a Harvard professor’s website claiming that there’s an asteroid headed for Earth, scheduled to hit around April. It will be TEOTWAWKI aka, The End of the World as We Know It. The professor loses his job over his assertions, but Eleanor is convinced he’s telling the truth–after all, he’s a professor and a scientist!–and can’t understand why the adults in her life don’t believe her.

Although Mack initially believes her and encourages her to start a secret “End of the World” club at school, it becomes obvious–as he continues making plans to transfer schools sometime after April–that he isn’t really concerned.

The book’s climax comes on the night of the prophesied collision: Eleanor is convinced the asteroid is real, despite her father trying to convince her that the professor is a phony. She makes her father and brother camp out downstairs, waiting in terror for the end. Which (*****spoiler alert****) does not happen–but it’s fiction, so you never know!

Ultimately, Eleanor has to face the aftermath–the derision of her peers, trouble at school, and the fact that Mack is still planning to switch schools. Her dad asks, “Did you want the world to end?” The story ultimately is about Eleanor learning to find her place in and accept the world we live in, despite its challenges.

“The World Ends in April” will be released on Sept. 3, so if you want to rush out and buy a copy–at least you won’t have long to wait. 🙂

A Swirl of Ocean by Melissa Sarno 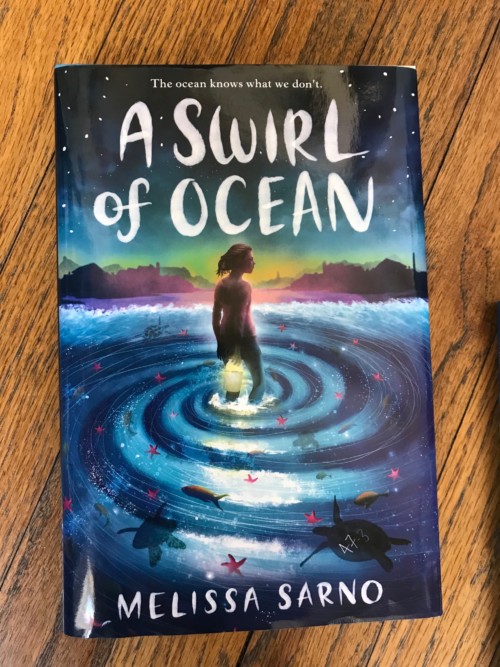 Most of these books start at the beginning of the school year–“A Swirl of Ocean” is an exception–or at least, school isn’t a major factor in this book. However, the protagonist is also a young girl whose life is about to undergo some big changes.

“A Swirl of Ocean” falls under the category of “magical realism,” so be aware that not everything that happens in this book has a clear explanation.

Summer and her adoptive mom, Lindy, (who is more like an older sister), live in a beachside tourist town year-round. The story takes place in the off-season, when only the year-rounders remain. Lindy found Summer wandering on the beach when she was a toddler. When no parents could be found, she adopted the 2-year-old. For the past ten years, it’s just been Summer and Lindy together, but at the start of the book, Lindy asks Summer if it would be okay for her boyfriend to move in with them.

This causes Summer to start questioning whether or not she truly belongs to Lindy, or if she will eventually be abandoned in favor of the new guy. To exacerbate this, Summer has a near-drowning experience at the beginning of the story, and afterwards begins having vivid dreams about the past, making her wonder how the people in her dreams are connected to her life.

Like many of these books, this one is about finding and trusting one’s place in the world.

Just Under the Clouds by Melissa Sarno (again!) 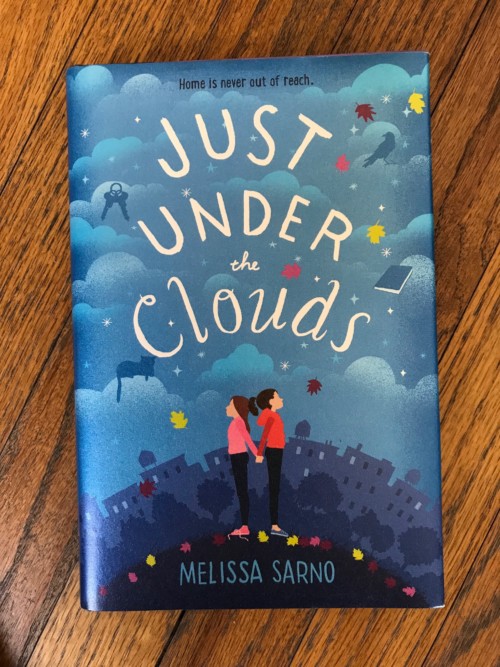 When you describe “Just Under the Clouds,” it sounds a bit melodramatic: Middle schooler Cora’s father died prior to the book’s beginning, and she, her mother and her sister–who has special needs–are now homeless. Not to mention, she doesn’t have any friends at school because what’s the point when you’re just going to move anyway? But the book never feels melodramatic–it is just another variation on a young girl wondering where she belongs, and it is quite beautiful.

Cora and her sister Adare’s relationship is central to the story, with Cora frequently wondering what Adare is really thinking, growing frustrated over her seeming inability to feel anger, getting frustrated by some of her habits–like refusing to wear shoes, etc. Ultimately, Cora loves Adare fiercely, if imperfectly.

At one point, Cora wets the bed and blames it on Adare, knowing her mother is less likely to be upset at Adare. Another time, the “mean girl” at Cora’s school baits her into using the “R” word so that she’ll get in trouble with a teacher, which Cora immediately regrets and feels shame over–and yet, she still said it.

Cora feels younger than most of the other protagonists in this list, possibly because she feels the most adrift. Yet she learns to become a better defender of her sister, to communicate her needs with her mother and to even risk friendship, despite not knowing how long it will last. 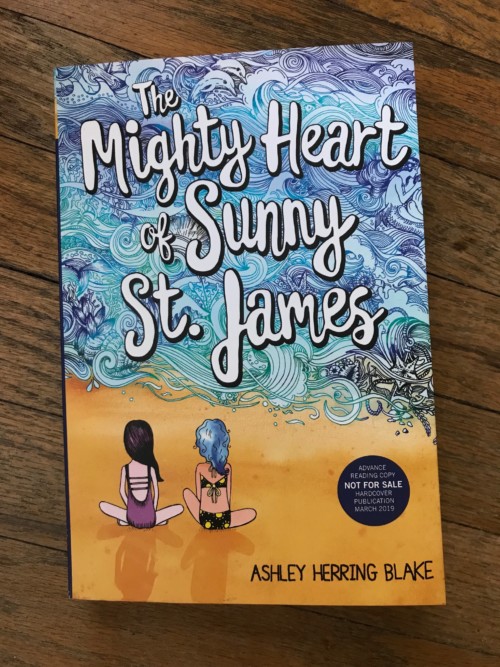 “The Mighty Heart of Sunny St. James” is not a back-to-school story, but it is very much a story about new beginnings: Sunny St. James, age 12, undergoes a heart transplant at the beginning of the novel. After having spent two years at home, sick, she is ready to embark on a new life. Again, this sounds dramatic, but *spoiler alert* the new heart never causes any major issues–it is more of a catalyst for helping Sunny explore who she is. Has the new heart changed her fundamentally, and if so, how?

Sunny has three immediate plans: 1) Try exciting new things 2) Find a best friend and 3) Kiss a boy. She immediately checks off the first two when she meets Quinn, a newcomer to her small island town. But things get a little complicated when, having roped Quinn into joining her on her “Epic Kissing Quest,” Sunny begins having feelings for Quinn, which may or may not be reciprocated.

Adding to the complication is that Sunny’s birth mother has contacted her for the first time in eight years. Sunny is torn between anger at her mother for being unable to give up alcohol in favor of raising her daughter and the desire to start building a relationship.

That’s it! Feel free to comment below which of these books sounds the most interesting to you–or what are some of your favorite Middle Grade books about back-to-school season or new beginning in general!

Want a chance to win these books? Follow @tulsakids on Instagram because we will be doing a giveaway of these books the week of August 19! 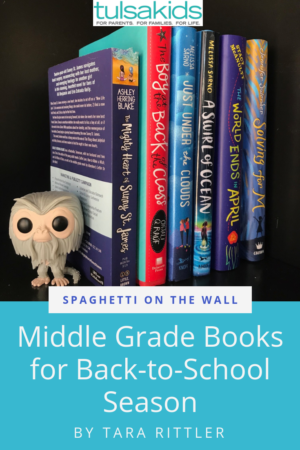