There's a book for that.

I‘ve mentioned previously how shy I was in middle school. It isn’t so bad now, partly in thanks to the internet’s plethora of pro-introvert comics and memes but mostly because there are more important things to think about than whether or not I’m part of an in-crowd (or any crowd at all). Adult-type gatherings can still feel awkward, but that’s one of the perks of being an adult: I can usually leave a situation if the awkwardness becomes unbearable. I do have a car, after all.

Another thing that helps me process the misery that was junior high is books. There is no shortage of books giving readers insight into the minds of bewildered middle schoolers. Recently, I’ve read two: “The Way to Bea” by Kat Yeh, and “All’s Faire in Middle School,” a graphic novel written and illustrated by Victoria Jamieson.* Disclaimer: I know books aren’t going to magically erase the pains of middle school or anything, but as someone who has always loved reading, I am optimistic that reading books about characters undergoing similar experiences can be helpful. 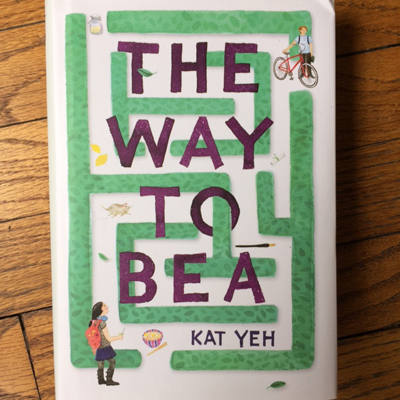 Despite having similar themes–middle school girls who feel invisible–these two  books are very different. In “The Way to Bea,” Beatrix Lee’s entrance into middle school is haunted by the question: “Why will none of my friends talk to me?” In “All’s Faire in Middle School,” Imogen (aka “Impy”) enters middle school as a previously homeschooled Rennaisance Faire employee. Although Bea has the advantage of having been to school previously, both girls are overwhelmed by how quickly the rules seem to change/have changed and try to remake themselves into someone new: Bea, by trying to be unnoticeable, and Imogen, by first trying to fit in with the “in” crowd and then, when that backfires, becoming a “hermit,” a response similar to Bea’s. 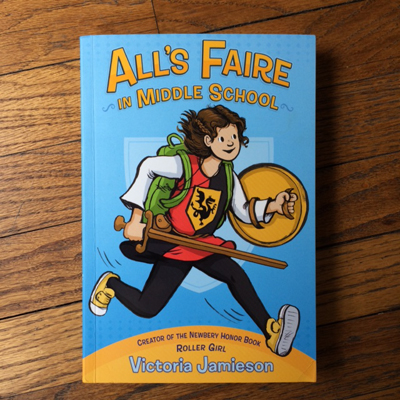 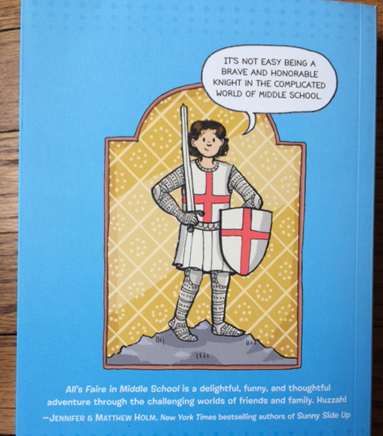 Bea is a poet, and her parents artists who–particularly her mom–encourage her to express herself in big ways (“What you feel inside is what you put out in the universe.”), which is exactly the opposite of what Bea wants to do–and the opposite of what her friends want from her. “Bea, your problem is that you’re just–you’re too much,” as her ex-best-friend S once said.

Imogen is a squire-in-training who teaches children juggling and sword fighting on the weekends. Her father is a Ren Faire actor and her mother owns one of the village shops. Imogen’s parents encourage her to live a life based on chivalry: to be kind, honest and brave. Neither Bea nor Imogen find themselves able to follow their parents’ wishes for them. Middle school is just too confusing.

Of course, by the end of the stories, Bea and Imogen have both come closer to discovering who they are, and to finding a solid group of true friends. Never mind that this group doesn’t look like what they had in mind at the beginning of the year. The primary lesson that both girls learn is to be true to themselves and to what they know is right. Trying to become invisible, to be so “normal” you don’t stand out in any way, is not the answer.

Although both Bea and Imogen are middle schoolers, “The Way to Bea” might suit a slightly older audience than “All’s Faire in Middle School”–and not because the latter is a graphic novel, but because the stakes are higher in “The Way to Bea.” *Spoilers* Bea befriends a boy with Asbergers, and at the climax of the book, their elaborate plan to sneak into a private labyrinth backfires, leaving Will alone, lost and in potential real danger. Although there are sword fights and villains in “All’s Faire,” the greatest danger is that Imogen’s little brother will never forgive her for losing his favorite stuffed animal.

“Saving Francesca” by Melina Marchetta also addresses this subject, although in a high school setting. Narrator Francesca Spinelli explains, “My theory is to lay low, and my reluctance to get involved has nothing to do with fear or shyness, contrary to popular perception. I have this belief that people hate change and, more than anything, they hate those who try to change things. I might not be interested in being in the most popular group in the world, but I’m less interested in being an outcast.”

When Francesca pictures people talking about her, they say “Have you seen the eldest?…She’s a dead loss. Has no idea what she wants to do with her life. She’s so insipid, she’s almost invisible.”

Francesca is similar to Bea in that their so-called friends have both told them that they are “too much.” Francesca was “a show-off” in middle school, and her friends had to “rescue” her.

Francesca’s personality is so big, however, that though she tries to lay low in her new high school, it doesn’t take too long before it starts to show through. A more critical problem is that Francesca’s mom, who has always encouraged her to get more involved in things and to live her own life, is stricken with acute depression at the very beginning of the book. Mia has always been vibrant and strong-willed, but for the majority of the book, she is unable to leave her room, “leaving Francesca lost, alone, and without an inkling of who she really is” (from the inside cover).

Put simply, I love this book, and had to reread it for a third time in order to write this post (not a tragedy!). ​

One final note: I think it’s interesting that none of the characters in these books are really “shy.” They have just been hurt by others around them and their response, for a time, is to withdraw. But by the end of the book, armed with a group of friends who build up rather than tear down, each protagonist becomes comfortable with who they are and allows their personality to show forth, even if others would accuse them of showing off or being “too much.” They know they are just fine.

*Both of these books were sent to TulsaKids by their publishers; however, I am not being paid to write about them.