Make Your Own Cherry Vanilla Jam 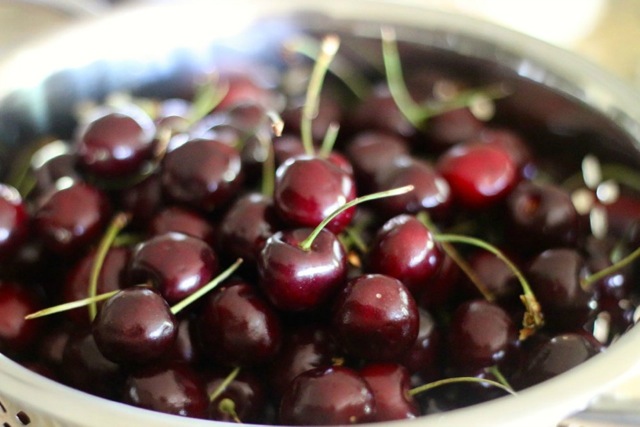 I love all of the local produce co-ops that have been popping up recently. I joined one a few months ago and I’m able to pick up a basket full of produce every 2 weeks for only $15, it’s a steal of a deal. Sometimes, however, we do end up with food we don’t normally eat and that’s where the creativity comes in. This past week, we had cherries in our produce basket. I’m not anti-cherry but I honestly had no idea what to do with them. Then, it occurred to me that I love cherry jam so I thought I would try and make my own. They had also given us vanilla beans a few weeks earlier so, naturally I decided to combine the two and see what would happen.
Turns out, it is amazing!
Ingredients:
3lb of Cherries
3 Cups Turbinado Sugar
3 Vanilla Beans (or 2 TBS Vanilla Extract)
1/2 TBS Lemon Juice (fresh)
Directions:
First, wash and remove stems and pits on the cherries. Then, chop them as small or as large as you’d like. I like chunky jam so I chopped it larger, you can also put them in a food processor. Using a skillet, combine the cherries and 3 TBS of sugar. Stir well to incorporate then, add in the lemon juice. Let the mixture simmer for about 10-15 minutes. Stirring frequently, add in the vanilla beans or extract.
If you are using real vanilla beans, simply slice the bean in half and rub your knife along the inside to scrape out the seeds. The seeds will be dirt-like, add these into cherry skillet mixture. Then, allow the mixture to simmer for about 30 minutes, stir the mixture frequently. Remove from heat and allow it to cool for about 10 minutes, the jam will thicken up.

Pour into mason jars and you’re all set! It can keep for about one month in the refrigerator but it’ll be gone long before then!
Categories: Money Saving Queen

Save Money on Baby Wipes

How to Start a Babysitting Co-op

Brown Bag Lunches for Less than $1