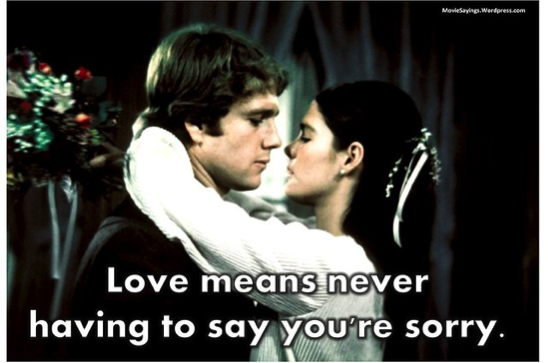 In the 1970s, there was a wildly popular movie named Love Story about a college couple. The main characters were a rich, preppy boy and a working-class girl, Ryan O’Neal and Ali McGraw. Ali McGraw’s character, Jenny, becomes terminally ill. In one of the saddest and cheesiest moments in cinema history, Oliver (aka Ryan O’Neal) says the now-classic line, “Love means never having to say you’re sorry.”

I don’t know what that scriptwriter was thinking, but love actually means frequently saying you’re sorry. That truth extends to the role of parenting. We want to believe our role as parents means we’re flawless, that we always make the right choices for our children, but it’s not possible to be right 100% of the time. The television 1950s mythical version of “Father Knows Best” doesn’t exist in real life. Even if we educate ourselves by reading parenting materials and following all the current advice, we’re still going to make mistakes occasionally.

Although there are tragic exceptions, I like to think most parents have good intentions. I set out with high expectations of the kind of parent I would be, but no one comes with a blank slate. Most of us carry the weight of our past into the present, with our parents being a strong influence. If childhood was a negative experience, it’s difficult, but possible, to parent your children differently. If your parents were the perfect “Ward and June Cleaver”-type parents, you might feel like you can never quite measure up to them. Most of us, myself included, had parents who were somewhere in between perfect and disastrous. For those of us whose parents’ skills fell in the middle of the spectrum, we may find ourselves picking and choosing which parenting traits we imitate and those which we hope to leave in the past.

Being a parent takes us to both ends of the emotional spectrum; it’s a love so deep and strong we can’t even describe it. We would die to save our kids, but let’s be honest, there are also days that being a parent feels like being pecked to death by chickens. If you take the latter feeling, combine it with the baggage from the past, and add everyday stresses, we have the perfect storm that created my personal story of “love means having to say I’m sorry” to my children. I think of myself as a relatively calm person, slow to anger and quick to forgive, yet this story will contradict my rosy self-image.

It was bath time for my three- and four-year-old daughters, and it had been a long, difficult day. As a single mom, there was no relief pitcher willing and ready to step in and take my place. I was physically and emotionally exhausted and was doing my best to contain my frustrations with my ex-husband, my job, and the million stresses coursing through my mind. My daughters were being typical preschoolers, roughhousing in the bath after their own long day, nothing out of the ordinary, but I was already on overload. I yelled at them and then threw the hard-plastic bright pink Shamu cup on the tile floor where it shattered into pieces. They had never seen me like that before (or thankfully since). My sweet little girls huddled together in the cooling water, stunned into silence.

I was immediately regretful. I gently finished bathtime, snuggled my daughters into warm towels, and whispered my heartfelt apologies. The evening ended with stories, prayers, and songs. It seemed all was forgiven. Maybe it was, but it was never forgotten and became a part of our family story that my grown daughters gleefully pull out at family dinners to tease me. “The night mom broke the Shamu cup” story became a reminder in our family that we all make mistakes, and apologies go a long way towards mending hurt hearts.

Of course, I could go on and tell you the other parenting mistakes I made, how I had unreasonable expectations for my firstborn, and how I wish I had understood my youngest daughter’s anxiety and responded differently. Then there was the “summer of the camisoles” when I had double standards for my teenage daughters based on body types. It was completely unfair, but that is a story for another day of self-flagellation. I think I was a good mother, but I also know there were areas I could have done better. One thing I did right was acknowledging my mistakes. I went to my daughters many times as they were growing up and many times since, with apologies and requests for their forgiveness. Some might view that as weakness, I see it as strength.

Some people are afraid their parental authority will be undermined if they apologize to their children, but the truth is that saying you’re sorry teaches your children so many positive lessons. It teaches them to have empathy, to be honest, and to accept responsibility for their actions. Perfection is unattainable, but if our children know we love them, and we ask for forgiveness when we’re wrong, we build stronger relationships. If apologizing is difficult for you, Psychology Today has some helpful tips on how to apologize to your child.

Being a parent is not a sprint; it’s a marathon and an obstacle course combined. Expect to occasionally stumble and be willing to admit when you’re wrong. Contrary to the line in Love Story, love does mean having to say you’re sorry! 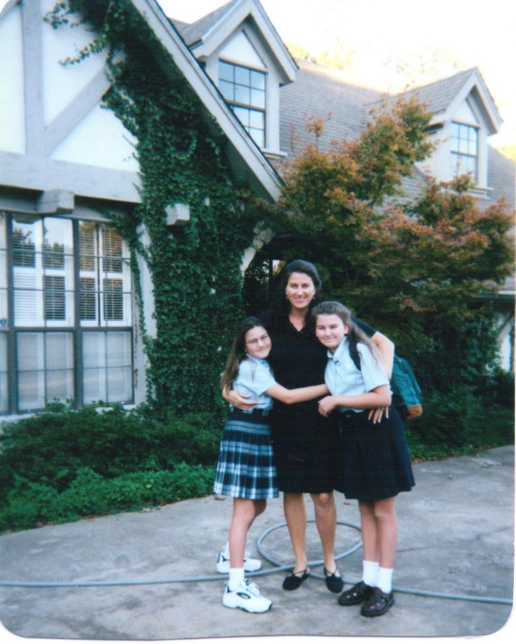 Thankfully, my daughters were always willing to forgive when I made parenting mistakes. 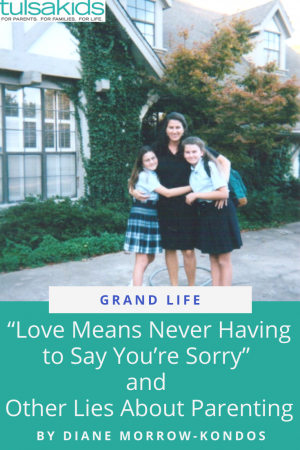