Editor’s Note: March is Developmental Disabilities Month. Diane Morrow-Kondos has invited different parents to share their story of raising a child with a developmental disability. These will be published each week in March 2021. Today’s article is by Lauren George, whose daughter Lincoln has cerebral palsy. 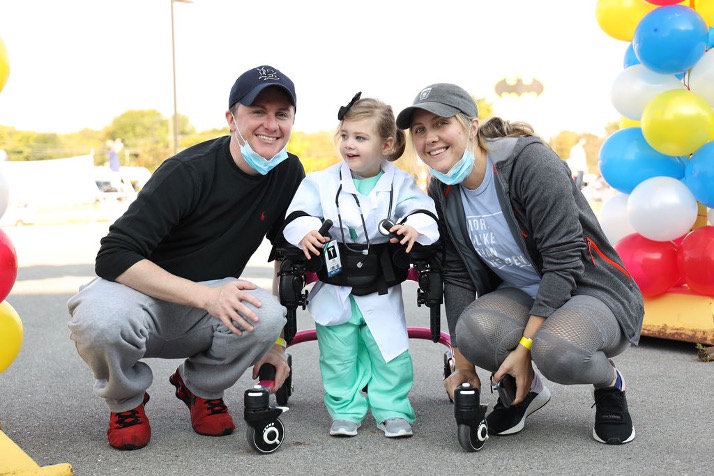 Lincoln with her parents

November 6, 2016, changed my life forever.  It was the day before I would deliver our fourth and final baby, and that baby would be a surprise, in more ways than one.  I remember that day very vividly.  I was in full-on nesting mode and needed everything around the house to be absolutely perfect, which meant the whole family was pitching in.  We spent the day cleaning and putting away load after load of laundry so that the next few days, I didn’t have to worry about household chores, and I could rest and prepare for our coming addition.

Baby number four was to be a surprise as far as gender was concerned.  We already had three little boys, so knowing the gender of number four was not a priority.  I just wanted to soak in my last pregnancy without the hustle and bustle of preparing for a little girl or boy.  That Sunday, November 6, my second born and I headed to a few different stores to find a coming home outfit for each gender. I hadn’t felt very well all morning, and these symptoms were only exacerbated once we got to the mall.  I remember feeling as if I would fall backwards down the escalator because my body just did not want to go any further.  We ended up going home and ordering a couple of outfits online instead because I just could not endure another minute of anything, let alone shopping.

My symptoms seemed like that of the end of pregnancy.  I was tired, nauseous, and very uncomfortable.  To me, this was just my body’s way of telling me it was almost time.  I remembered feeling ill with all three of my previous pregnancies right before I went into labor.  That night, I went into labor.  My water hadn’t broken, and my contractions weren’t close enough to rush to the hospital, so I let it play out at home until morning.  I sent my fiancé to work and told him I would call him if I needed him.  At around 10:00 that morning, I had to make the call that I was ready.  Luckily, he worked very close to our home, so he was there quickly, and I was off to hospital by 11:00.

A few hours later, at 2:33 p.m., I gave birth to our very first baby girl.  I was so excited to finally have a little girl! That excitement quickly faded when I realized I never heard her cry, and they rushed her out of the delivery room.  After having three NICU babies, I wasn’t too terribly alarmed, though.  This, to me, seemed like standard procedure.  I had two previous premature deliveries, and our third baby had a very rare genetic disease called Hirschsprung’s Disease. Our time in the NICU made me immune to having an emotional breakdown over having another baby taken from me directly after birth.

Minutes passed, and Riley, my fiancé, walked back into the room.  He said, “I’m not really sure what’s going on, but I’ve watched enough Chicago Fire to know it’s not good.  They had to resuscitate her and put a tube down her throat.”  Emotions flooded me, but I held my composure and hoped for the best.  After all, we’ve been here before, and it’s always been okay.  It wasn’t long until the neonatologist came into the delivery room.  This was the moment I knew everything wasn’t okay.  No matter what, a neonatologist had never left the NICU to come to my delivery OR recovery rooms.  It always seemed like I would search for them for days, actually, or they would speak via NICU nurse.  He said, “We’re trying really hard to figure out what’s going on, but the baby is very sick.  We’re doing everything we can.”  That phrase haunts me to this day.  Typically, when a medical provider says, “we’re doing everything we can,” the outcome isn’t the best.  While I was still numb from my epidural, they wheeled me to the NICU.  This also told me that something was horribly wrong.  Every other time I’d delivered, I had to let the epidural wear completely off before they would let me go to the NICU.  I had to be able to walk on my own.  She’s dying, I was positive. 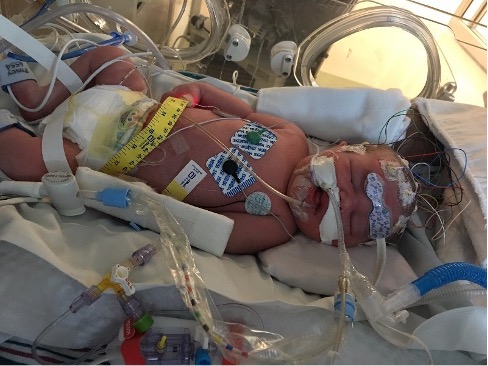 Lincoln in the hospital

When I saw my brand-new baby girl, Lincoln, for the first time, I was horrified.  She was so swollen, and she was a grey-blue color that looked like death.  She wasn’t moving, she had tubes and wires going in every direction, and we still had zero answers on why she was in the condition she was in.  I signed consent form after consent form for them to take whatever measures necessary to keep her alive.  One of those consent forms was to put her into a hypothermic state.  The words they used were to “preserve whatever brain tissue was left.” That was such a hard punch to the gut.  It was clear to them that she had been without oxygen for a period of time in utero, but we had no idea how long she had been without oxygen, which meant the chance of brain injury was very high.

The next day they took my blood a million times.  Probably not a million, but it felt like a million.  I went to the NICU after I was cleared by my nurse to go up there for the day, and that’s when they told me why she was in this condition.  My blood had a very large presence of fetal cells in it, which means that her blood had leaked into mine through the umbilical cord.  This is called a fetal-maternal transfusion or hemorrhage.  This is a type of placental abruption that happens to 1/1500 pregnancies.  I was so sick the day before because a foreign blood type was in my bloodstream.  The doctor assured me that this is not something I can cause, and it was just a freak occurrence. Again. Another rare baby.  Once we knew what the problem was, it was time to get to work trying to fix it.  She underwent a full-body blood exchange where her body was emptied of whatever blood was left, and they did a transfusion of blood and platelets.

Lincoln’s kidneys were shutting down, she was having seizures almost constantly, she was still in a medically induced coma, and the doctor kept telling me how critical her condition was.  Her body didn’t want to accept the blood exchange, so they continued to do transfusions, and she was on life support.  She was brought out of hypothermia, and we were told that on day 14, she could undergo an MRI to see what kind of brain damage she had sustained.  Day 14 came, and so did more bad news.  Her brain was almost completely injured.

This news was absolutely devastating.  She was diagnosed with periventricular leukomalacia, and the neurologist told us she would never walk, talk, eat on her own or live a normal life, and she would more than likely be blind.  He said her state of life would be similar to that of a vegetative state, and we should place a feeding tube ASAP.  I held Lincoln all day and night that day, and I promised her we would get through it together.  I told her no matter what, I’d make sure she beat the odds.  I decided to hold off on a g tube until she was given a chance to try a bottle.  It seemed silly to fly blind and make decisions based on opinion and imaging when we hadn’t given her a chance to show us what her capabilities looked like.  She took a bottle like a champ the next day, smiled at me, and I felt like it was just the reassurance I needed that everything would work out somehow.

About 14 days later, we went home. I was horrified to leave the hospital.  Sure, I had done this before, but not to this extent.  The most “equipment” I’d ever taken home with a baby was a colostomy bag, and I left knowing that was temporary. This time I was leaving with a baby who was still having seizures and had a lifelong diagnosis of disability.  I had absolutely no idea what I was doing, and I was so scared and very doubtful of my abilities to be a good mom to this new baby.  I felt like I was leaving with a baby whose life was over before it even began.  Being the type-A personality I am, I came up with a plan. I would cram as much physical therapy into our life as I could, and I would treat her like a “normal” baby as much as I could.

Eventually, we found ourselves in Memphis for epilepsy care, which is now mostly resolved.  We found ourselves at therapy appointment after therapy appointment, which included going to Los Angeles for a month for stem cell therapy and intensive therapy.  It’s been four years now, and I wish I could go back.  I want to go back to that scared mom in the NICU so badly and wrap her in a hug and reassure her that it’s going to be okay.  I wish I could go back and tell that mom that someday she would have a spunky little girl who would talk her ear off, know exactly how to wrangle her way into a bag of Skittles, and be so full of life that the world can hardly handle it.

Lincoln lives with Cerebral Palsy because of her brain injury.  She will be disabled for the rest of her life, but she will still live a beautiful, high-quality life.  Hope is what has driven me every single day since November 7, 2016.  Between a stubborn mama and modern medicine, I know that Lincoln will live life to the absolute fullest and to the best of her ability.  A new diagnosis can be scary, but I hope if you find yourself in a new diagnosis, you remember us, and you find hope.  There’s always a brighter tomorrow, even if today seems to be so dark the sun could never shine again. 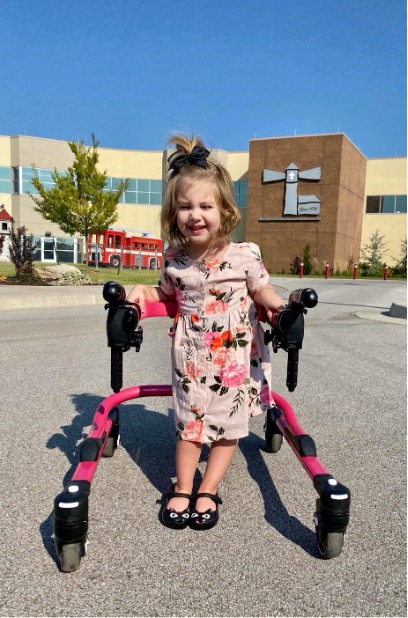 Lincoln loves being a student at Little Lighthouse! 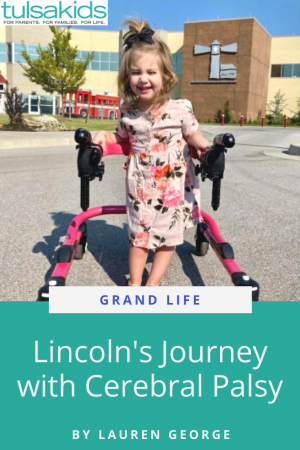