Lead with Love: Advice for Parents of LGBTQ+ Youth

According to a 2020 report by the Williams Institute at UCLA, it’s estimated that 9.5 percent of 13- to 17-year-olds are LGBTQ+ in America. Although children are coming out at a much younger age, it can be challenging for them and their families.

There are several reasons coming out can be difficult for children. One of the most common reasons is fear. This includes fear of what their parents and friends will think of them and the fear of disappointing others. However, in environments where LGBTQ+ individuals are accepted, it’s easier for them to come out because they are most likely to receive support from their friends and family.

It’s safe to say, most parents want the best for their children. However, providing support can be difficult, particularly if you are the parent of a lesbian, gay, bisexual, transgender or queer/questioning (LGBTQ+) child. In many ways, LGBTQ+ youth encounter a variety of unique challenges that parents often feel unprepared to tackle.

Amanda Kirkland was one Tulsa parent that was taken aback when her son, Nate, stated he did not feel right in his 8-year-old body. But he was 11 when he came out as a transgender male.

“Although I have considered myself a progressive and an open-minded parent, it still hit me like a ton of bricks,” she said. “Even before I had kids, I had always considered the possibility of having a gay kid and was totally prepared to be a supportive parent. However, I had never considered having a transgender child, and I knew very little about the transgender community.”

Amanda said Nate came out to her in a letter where he explained he felt like he was born in the wrong body and identified as a male. Nate asked her to address him with he/him pronouns and wanted to change his name from Naomi to Nathan or Nate for short.

“I’m so glad he chose to write me a letter because it gave me time to process it on my own and in private. I was not at all surprised, but I was very confused, mostly because I knew so little about it,” she said.

Most parents want to keep a healthy relationship with their children, whether or not they are LGBTQ+. They may have mixed emotions about discovering they have a LGBTQ+ child for various reasons. Parents could be worried about how people view their child, and of bullying in schools or discrimination in the workplace, and some may cite religious reservations. But whatever parents’ feelings are, it’s a good idea to err on the side of being supportive and empathetic.

The following advice from Tulsa parents of LGBTQ+ kids, and their children, may help others steer a clearer course through this transition.

After reading the letter from her son, Amanda was eager to learn more about the transgender community. She immediately hit Google and began researching the subject. She was careful to only research reputable articles from sources like The American Academy of Pediatrics and The Mayo Clinic. After she gained some information, she sat down with Nate to address his letter.

“I took a very honest approach with him. I explained to him that this was something that was very new to me, and it was something that I could not relate to, but that I was completely open to learning and gaining an understanding. I told him that I would respect his request on name and pronouns, and that I loved and supported him unconditionally.”

She also told him that she may have a lot of questions for him and to not mistake them as her doubting him, but as her trying to gain more understanding.

Amanda said parents should take time in private to process their child coming out and to educate themselves on the subject.

“I believe it’s okay to be confused and scared and even in disbelief, but your child does not necessarily need to witness all of that,” she said. “Your child is most likely experiencing a lot of confusion themselves and may be looking to you for strength. I also believe it is very important to be honest with your child about your lack of knowledge or understanding, but it’s even more important to let them know that you are completely willing and open to learning how to best support them.”

According to the National Survey on LGBTQ+ Youth Mental Health, 2020, 46 percent of LGBTQ+ youth report they wanted psychological or emotional counseling from a mental health professional but could not receive it due to therapy being expensive and/or having to obtain parental permission.

Amanda’s support for Nate made counseling a logical step.

Another Tulsa mother of a LGBTQ+ child, Heather Gragg, also highlighted the benefits of counseling. “I also highly recommend counseling and support groups for yourself with professionals who specialize in the subject, and the same for your child.”

Dr. Caitlin Ryan, the director of the Family Acceptance Project at San Francisco State University, has conducted several studies on how a family’s accepting and rejecting behaviors affect the well-being of LGBTQ+ children. One of her studies concluded that family acceptance helps protect adolescents against depression, substance abuse and suicidal behavior. Additionally, she reported that young people with accepting families also reported higher self-esteem, social support and overall health.

Heather Gragg’s daughter, Brooke, was in eighth grade when she came out. “I was called in to the guidance counselor’s office because there was an upset between girls, and it came out she was struggling with her sexuality,” Heather said. “I was more worried she didn’t feel she could share that with me than the fact that she liked girls.”

Heather had not liked how a gay uncle in her conservative family was treated and was keen to avoid this with Brooke. She said every child needs to feel loved and accepted unconditionally and that them being LGBTQ+ does not change the love parents have for them.

However, Nate Kirkland did not have a good experience with his biological father. His mother, Amanda, said, “Nate experienced a lot of criticism and judgement from him. He was unwilling to accept Nate as a transgender male, and it has resulted in their relationship being completely severed.”

According to GLSEN (Gay, Lesbian Straight Education Network), 90 percent of LGBTQ+ students hear anti-LGBTQ+ comments in school and only 26 percent feel safe at school. Bullying is an issue for many students; however, LGBTQ+ youth are often targeted for being different. If you recognize signs of bullying, you can reach out to a school administrator, guidance counselor or teacher.

Heather Gragg said there was some bullying she was unaware of. For some time, kids were cruel and called Brooke derogatory names. However, Brooke has been “out and proud” since the beginning. Heather said, “I imagine it’s easier when you have a parent who does not react with shame or any implications that it means the child is broken.”

Nate Kirkland attends Booker T. Washington High School, which has an excellent reputation for inclusiveness, and his mother reported no bullying.

Heather said parents should “love our kids completely and without condition” as it was the best thing a parent could do, and what they are meant to do. She said parents should support their children while they figure out who they are and impose no restrictions on that exploration except what is necessary to keep them safe.

“Most times, around here [Tulsa, Oklahoma], it is religious belief that creates the disconnect. If that is the case, I would suggest parents read Walking the Bridgeless Canyon by Kathy Baldock. She will have another book out later this year, Forging a Sacred Weapon: How the Bible Became Anti-Gay. I truly believe the revelations involved will impact the conversation significantly. At least I pray it does,” Heather said.

Nate said parents should love their kids “no matter what!” He said the hardest thing about coming out was wondering if his parents would accept him or be disappointed. “The best thing a parent can do to support their teen is not to question why,” he said. “Just because it makes little sense to the parent doesn’t mean it doesn’t make sense to the kid. Ask your kid questions if you don’t understand; they will most likely be happy to explain their feelings to you.”

Brooke said the hardest part about coming out was just the fear of being judged. “At home I was never scared because my mom had always been an LGBTQ+ ally, even before I knew I was gay. But I was scared of coming out at school, because kids are mean and a lot of them don’t like things they don’t understand.

“But having my mother’s support and being raised knowing that love is love and everyone deserves to be treated with kindness and respect, and that you cannot control who you love, really helped me become comfortable with myself and come fully out and not care what anyone had to say.”

Her biggest advice to parents was to just love unconditionally, no matter if they understood or saw that for them in their future.

“Your children are their own human beings, and whatever gender they are, whatever pronouns they use, and whatever sexuality they are, does not hurt you and does not define them. They deserve love, just like anyone else. Plus, make sure you raise them to love themselves, because if you love yourself, nothing anyone can say to you can tear you down because you know your worth.”

Ultimately, parents want their children to be safe, healthy and happy. If your child comes out to you as LGBTQ+, that may not be something you are prepared for. However, your acceptance really matters to their safety, health and mental well-being.

The common theme in this journey is love. You may not know all the answers and you may have tons of questions, but leading with love and keeping the lines of communication open puts you on a good path to supporting your LGBTQ+ child. 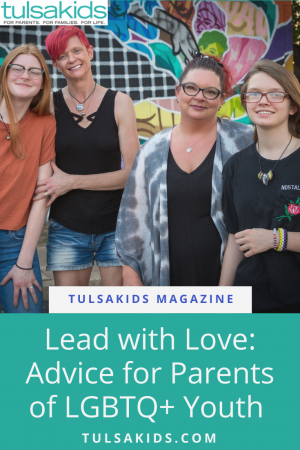