Is Expanding Charter Schools the Best Way to Achieve Equity?

At the last TPS school board meeting, board members voted to expand three charter schools in the TPS district. Since I can’t read people’s minds, I have to assume that board members, parents, teachers, administrators, concerned citizens and philanthropists all want children to have the best education possible. But why would a school board vote to strip already thin resources from public schools?

What if school board members had said, “No. Before we fund anything that further drains students and resources from our public schools, we must stand firm in ensuring that all of our children in every school, including those with special needs and disabilities, black and brown children and English language learners, are getting the resources that they need.”

The public school next door to the charter must keep the lights on, provide everything it has been providing, including educating every student that walks through the door, while doing it on less money as the resources go over to the charter. Unlike public schools that must find room for every student, charters can keep class sizes down. Charters can hire non-certified teachers for less. Charters can choose not to educate more expensive students with special needs. Charters are less regulated than public schools, with their own boards and separate administration – essentially their own private district of one. Even if charters did outperform public schools, does this make fiscal sense? It sets up the public school next door for failure for no other reason than we, as a community, as a state and as a country, don’t have the will to create equity in our public schools, especially in high-poverty areas. Instead, we have turned over our civic responsibility to market reformers and philanthro-capitalists who often have little or no experience as educators. Is it choice when only one choice exists? Families who are sending their children to charter schools do so because they don’t see their neighborhood school as a choice.

In expanding charters, we’re starting with the incorrect assumption that teachers and public schools are failing.  Poverty, and I might add institutional racism, would be a more accurate cause of public school struggles. Add years of underfunding to that. While it’s easy to blame teachers, or perpetuate the myth that schools just have not changed to keep up with the times (schools and teachers are constantly changing and adapting – especially where administrators trust professionals to know how to conduct their own classrooms), addressing racism and poverty is complicated and difficult. Reforms don’t really address those issues; instead, they leave the children most in need behind with fewer choices than ever.

There are many, many instances of reform experiment failures, but we hear less about them because they don’t feed the narrative that public schools and teachers are failures.

Last week, the Providence Journal in Rhode Island published an article about Central Falls High School. This particular effort at reform involved Superintendent Gist when she was the education commissioner in Rhode Island. In 2010, the entire faculty at Central Falls High School was fired because of the students’ low test scores. The (incorrect) assumption was that the low scores were the result of bad teaching. Eight years later, the students are still getting low test scores. Evidently, blaming and firing the teachers didn’t work to turn the school around.

George McLaughlin, a teacher who had been fired from Central Falls, sent the reporter for the Providence Journal the following email and copied it to me:

The current test scores at Central Falls High School are even lower than when the entire faculty was fired in early 2010–for low test scores– with the blessing of Ana Cano Morales (still the President of Central Falls School Board), James Diossa (the current mayor, who was taught by the teachers whose firing he endorsed), Frances Gallo (“reform” superintendent), Deborah Gist (“reform” education commissioner), Arne Duncan (US Secretary of Education), and President Obama  (who sang the accolades of Frances Gallo, quipping “…that something had to be done!”).  Victor Capellan, the current superintendent, has been part of their “reform” and their new “accountability” ever since.

So much for “reform” and “accountability” after so many heads were chopped off and so many good, solid, talented and dedicated teachers were wounded and blacklisted. For what?  What was done to those teachers (90 percent of whom left the school they loved within 2 years of the eventual ” settlement”) should haunt those who tortured them by treating them so unjustly.

Why aren’t you writing about that?

“Nothing conquers but truth.” – St. Augustine

A healthy dose of skepticism and some honest community dialogue might be a good thing. If reforms aren’t working better than public schools, why are we enamored with them? With the extra money from philanthropists and businesses, smaller class sizes and the ability to pick and choose students, hire and fire teachers, charters should be blowing the regular public schools out of the water. But they’re not. Look at New Orleans. The entire school system was turned over to charter operators, and 10 years later, 40 percent of the schools are D or F schools. Most of the students in those low-performing schools are black and brown. Louisiana has some of the worst schools in the nation. https://www.nytimes.com/2015/08/23/opinion/sunday/the-myth-of-the-new-orleans-school-makeover.html

The “miracle school” in Washington D.C. where 100 percent of the students graduated and were accepted to college was proven to be a fraud.

I know there are many well-intentioned people who believe that school reforms such as charters are the answer to inequities in public schools. That is a complicated problem, and charters have not proven to be the answer. Charters, in fact, create more “winners and losers,” as one would expect with a market-driven philosophy. Are we willing to accept that many of our most vulnerable children will be “losers” in the competitive market system set up by charter reforms?

Charters are often touted as the panacea to school inequality; however, a new book, “Educational Inequality and School finance: Why Money Matters for America’s Students” by Bruce Baker, a school funding expert, argues that public schools are more equitable when they are improved within the system, not through a market-place driven ideology that works outside the system. In “Why School Choice Ends Up Creating Injustice and Inequality,” Jan Resseger reviews the book, highlighting Baker’s premise that “…The only way expanded liberty can lead to greater equality is if available choices are substantively equal, conforming to a common set of societal standards. But if available choices are substantively equal, then why choose one over another.  Systems of choice and competition rely on differentiation, inequality, and both winners and losers.” (p. 28)

Resseger also points out three news stories just last week about the failure of charter schools in Detroit, Arizona  and New Orleans that promised miracles and/or equality and are anything but equal.

And here’s another one about a miracle school in Chicago: https://garyrubinstein.wordpress.com/2018/12/09/cps-considers-closing-an-urban-prep-campus-for-poor-performance/

Looking at the Oklahoma state report cards for schools, overall, teachers in the charter schools have much fewer years of experience than teachers in public schools. They also educate fewer students in Special Education. For example, according to the Oklahoma School Report Cards, teachers at Tulsa Honor Academy Charter have an average of one year of experience, while the state average is 12 years. The percentage of Special Education students at Tulsa Honor Academy is 3.4 percent, while the state average is 15.8 percent.

Here are the Oklahoma School Report Cards 2015-16 for the three charter schools that are expanding:

Since Collegiate Hall advertises itself as a STEM-focused middle school, it’s surprising to see the low math and science scores.

There are so many, many cautionary tales both in Oklahoma and around the country about charter schools. Do we want to destroy public education and rebuild it as a market-driven institution? Public education has always been underfunded, so getting dollars from philanthropic organizations and edu-business is extremely attractive. But what are we willing to give up to get the money? Our democratic institutions?

Why is it that we have the energy and the money to support charter schools, but we don’t have that same kind of passion to make public schools safe, equitable and outstanding for all of our children?

Ressenger ends her piece by quoting Jitu Brown, Journey4Justice Alliance’s executive director, and I will use it here. In his Forward to a report, Failing “Brown v Board,” published in May 2018, Brown addresses Bruce Baker’s concern that in education, the charter school marketplace undermines equity even as it expands freedom of choice: “In education, America does everything but equity. Alternative schools, charter schools, contract schools, online schools, credit recovery—schools run by private operators in the basement of churches, abandoned warehouses, storefronts; everything but ensuring that every child has a quality Pre-K through 12th grade system of education within safe walking distance of their homes.” 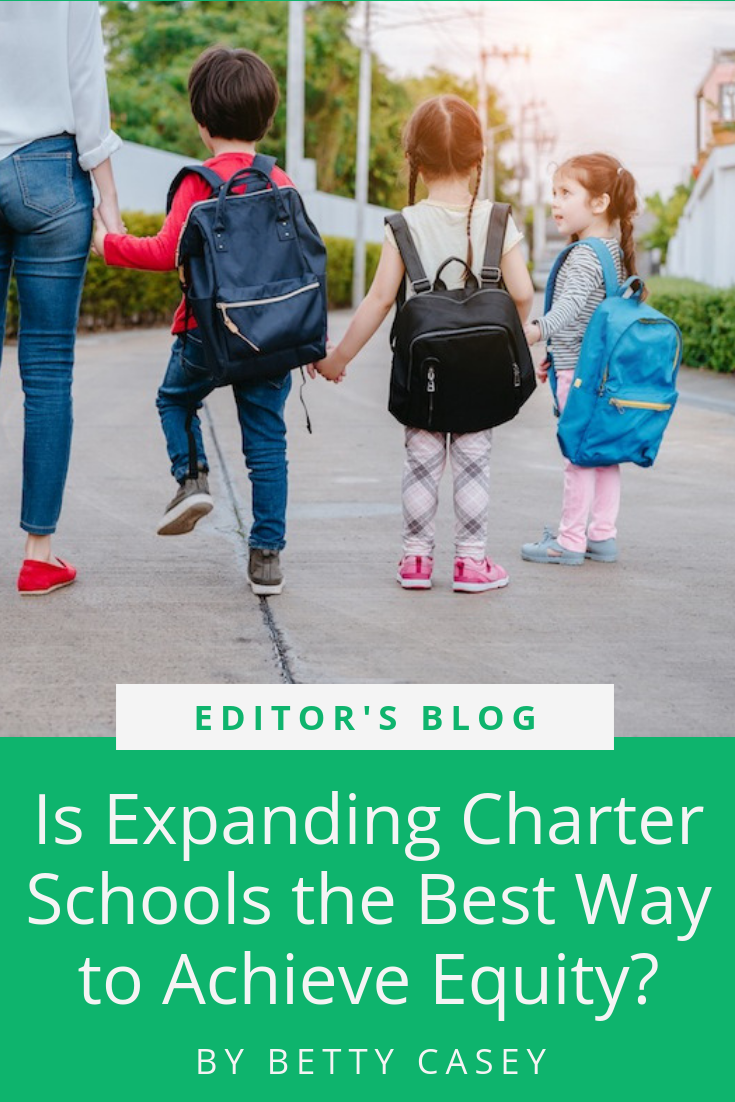